Reports from the Other Side: Geraldine Cummins and F.W.H.Myers 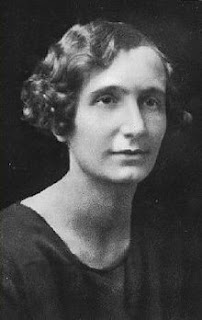 She came from an Anglo-Irish milieu similar to that of William Butler Yeats, and wrote two plays that were performed at his beloved Abbey Theatre. Her mentor was the famous Irish medium Hester Dowden, said to have been the model for the psychic in Yeats' spirited one-act play The Words Upon the Window-Pane. When she started practicing as a psychic medium, Yeats was one of the first people to consult her.
Her name was Geraldine Cummins, and her life story as author, suffragette, medium and possible secret agent during World War II, is quite fascinating. On November 7, 1941, a month before the United States entered the war, she gave a private sitting for David Gray, the American envoy to Ireland, at the American Legation in Phoenix Park, Dublin. By automatic writing, she channeled a deceased British prime minister (and past president of the Society for Psychical Research), Arthur Balfour, who gave a list of Nazi quislings in Ireland. She proceeded to deliver a warning in the name of the recently deceased mother of President Franklin D. Roosevelt: "My boy will have to make an important decision in the next few months. I want him to throw down the gauntlet." David Gray, who was married to Eleanor Roosevelt's aunt, transmitted the message to the White House.*
Dr Wendy Cousins, a lecturer in the School of Nursing at the University of Ulster, has written an excellent essay on Geraldine Cummins for The Paranormal Review that has fired up my imagination, not least because of the connections with Yeats, whose adventures in the spirit realm are a theme of my own Dreamer's Book of the Dead.

I'll confine myself here to Geraldine Cummins' role in bringing through the possible afterlife adventures and reflections of F.W.H. Myers, the great Victorian psychic researcher whose driving cause was to prove the soul's survival of physical death. He died in 1901, before completing his masterwork, published two years later as Human Personality and Its Survival of Bodily Death. Given more time, he would have rounded out his immense dossier on the ability of consciousness to function outside the body with a thorough account of "spirit return" and the psychic mediums he studied.
Geraldine Cummins may have given him the opportunity to do better than that. She channeled two books in which Myers describes the afterworld as a resident. The first was published as The Road to Immortality, the second as Beyond Human Personality.
I cannot judge whether the material in these books came from  the individual spirit of Myers, or from some essence of his personality and worldview communicating from a higher plane, or from a "secondary personality" of the medium. What I can say is that the content is immensely intriguing.


The two books provide a Western geography of afterlife transitions that is plausible and suggests paths for meditation and for exploration and development as road maps for further journeys.
The point of soul’s journey, the author insists, is “the evolution of mind”, and “the mind develops through manifestation.” He describes seven planes of reality and consciousness. In the manner of a classicist (which Myers was) the author describes the first level beyond the physical world as Hades. It is not to be confused with hell. It is an "intermediate state" where the traveling spirit begins to become aware of its condition.
The next level he calls the Plane of Illusion (or Terrene Imagination). Here the spirit lives in a dream world shaped by memories of earthly things. He may build himself a home, or a whole city, as he discovers the creative power of imagination. Inhabitants of this plane are drawn to different people and situations according to their desires, their affinities and their imagination (or lack thereof). The worldliest, most wicked, or most "animal-like" spirits don't prosper here. Beyond Human Personality contains vivid reports of spirits that slide back down into Hades and are then drawn back down to earth to occupy new bodies.
The right direction is up, always up. The next level up he calls the Plane of Color, or the Eidos (in the Platonic sense of ideal Form). You don't get there without assuming a new, and subtler body, and
that has to be earned. "Existence in this state is not governed by the senses. It is more directly controlled by mind. It is still an existence in form, and therefore an existence in substance. This substance is a very rarefied matter. It might be called an air of matter."
There are three levels above and beyond, rising to the Seventh Plane where "the spirit and its various souls are now fused and pass into the Supreme Mind, the Imagination of God, wherein resides the conception of the whole, of universe after universe, of all states of existence, of past, present and future, of all that has been and all that shall be. Herein is continuous and complete consciousness, the true reality."
The description of stages in the evolution of mind in which we become aware of our soul families and our connectedness on higher levels is stimulating:

The higher the ego climbs on the ladder of consciousness, the nearer it draws to other kindred souls…In time they are able to enter into the other souls’ memories, perceive their experiences and be sensible of them as if they were theirs. Mind becomes communal in the last stages, for the spirit, the unifying principle, is tending all the time to produce greater harmony, and therefore greater unity. [from The Road to Immortality]
-

* David Gray, U.S. Ambassador to Eire from 1940-1947 and a strong opponent of the Nazis, wrote a preface to Geraldine Cummins' 1951 autobiography, Unseen Adventures.