The vapor drinker and the hungry road 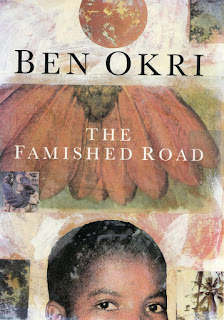 
In The Famished Road, Nigerian author Ben Okri takes us deep inside the lives of those who are at home (and not at home) in the worlds of the living and of the spirits. This extraordinary novel seized me with the first lines, which I had to read over and over, not for comprehension, let alone to turn them into a pale paraphrase, but to let them dwell fully inside me:

In the beginning there was a river. The river became a road and the road branched out to the whole world. And because the road was once a river it was always hungry.

I took the book as my in-flight reading on my journey to New Mexico in December 2011 for a board meeting of the Society for Shamanic Practitioners. The narrator is a boy of the kind called abiku in Nigeria, who may be fated to die young because he has spirit companions on the Other Side who want him to return to them soon and will do almost anything to pull him out of the land of the living. Madame Koto's palm-wine bar is his constant hangout, and its clientele make the denizens of the Space Bar in Star Wars look like country club golfers in plaid pants.
I was seized by descriptions of how, as the living raise a glass or a fork or a cigarette to their lips, the spirits pressing thick about them dive in to get the first taste. The spirits drink the vapor of booze or food or smokes rather than the solid stuff. By my experience and observation, this is very much how it is, though few in modern Western society are able to perceive it. I have never met a genuine alcoholic, for example, who is not afflicted by a press of dead drunks trying to get another drink - that is to say, the spirit of the bottle - through them.
I was thinking about this when I deplaned at Albuquerque airport. On my way down to baggage claim, I was greeted by a crescent line of cheery people ringing handbells, with a large explanatory sign that read: "ENCHANTMENT. Albuquerque Handbells Ensemble." Nice. 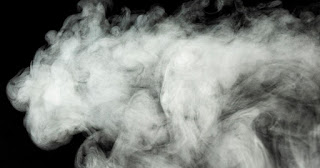 As I rode the last escalator down, I was astonished to see a lean man in dark glasses puffing on a cigarette. Not something you expect to see in a U.S. airport these days. When I got closer, I saw that he was not blowing smoke. Rather, as he sucked on the tube, a fine mist - a vapor - rose around him.
After I took my seat at the front of the airport shuttle, he came up the steps, still sucking on the strange cigarette. "Excuse me," I spoke to him. "I would like to know about your ghost cigarette."
He took this as an invitation to take the vacant seat next to me. He explained how the e-cigarette, as he called it, simulates the act of tobacco smoking by using heat to vaporize a propylene glycerine liquid solution into an aerosol mist that is inhaled.
I told him about the vapor drinkers in the novel. "When I saw you, I thought a character had stepped out of Madame Koto's bar." He laughed and shared part of his life story. A writer and artist, he has traveled the two worlds, experimenting with lucid dreaming and the shamanic use of hallucinogens. He quickly agreed with me that the most powerful dreamers and shamans have no need of chemicals beyond those produced in their own bodies. He told me about his friend Francis Huxley's early work in Amazonia and Haiti, adding two books to my always immense reading list.
He had lived in Bali, and gave me a thrilling, step by step account of rituals of village exorcism in which the powers of good - barong - must be mustered against evil spirits led by the terrifying demon queen, the Rangda.
All of this made for a wonderfully fast and fun ride from Albuquerque to Santa Fe. As we got off the bus, I noticed another man carrying a marvelous leather bag shaped a bit like a tall drum. "It's a goat," he told me when I complimented him on his carry-on. "I got it in Africa forty years ago. It holds everything I need for my trips." I looked more closely and saw that the bag had indeed been fashioned from a whole goatskin.

I make a round trip by airplane most weeks of the year, and this frequently involves from 10 to 20 hours of travel each way. When people ask me how I can do it, I respond that I am hungry for the road of fresh experience and everyday magic. Coincidence multiplies when we are in motion. Of course, this requires us to be open to the gifts of chance encounters, and the play of the Trickster, And to notice how life rhymes, as when the vapor drinker popped out of the book after a sign promised Enchantment.
Posted by Robert Moss at 1:00 AM

PS I discovered since writing and posting this article that Ben Okri has published a sequel to "The Famished Road" titled "Songs of Enchantment." Life rhymes, and some of the rhyming sequences go on and on....

the image of the Bali rangdas evoked so many of those in the film I just recently saw, Werner Herzog's "Cave of Forgotten Dreams." watching it felt very much like being on a hungry road. I would love to know what others who have seen the film make of it.

Susan - I love Werner Herzog's documentary, especially the short interview with the young French paleontologist who slept in the Grotte Chauvet and dreamed with the cave lions (and also studied what we can learn about the possible shamanic use of paleolithic rock art from contemporary Aboriginal practice.) If you type "cave" in the search engine for this blog, you'll find a number of related essays and journeys, including this one: http://mossdreams.blogspot.com/2011/06/looking-for-civilized-cave-man.html

Thank you, Robert! I will go and read those entries. so many devoted professionals depicted in the film. I especially loved the guy (can't find his name cited anywhere in the film) who spoke (towards the end) of fluidity and permeability and suggested a more accurate classification for humans is homo spiritualis. "sapiens...no..we don't know very much" :)

One who longs for mists said...

Robert,
As I was consoling a student about the masculine form of creativity models I encouraged her to become a dreamer, that is the road to creativity the one that soul has laid with bricks of impressions of warm hands, lavender elephant clouds and the magic that most can no longer perceive.
Thank you for being a visionary.
One who longs for the mist