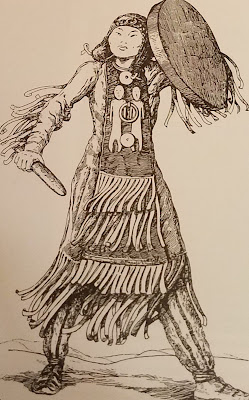 At a benefit dinner, the wife of a bank president once asked, “What exactly is it that you do?”

I told her, “I’m a paleolithic psychologist.”

She nodded respectfully, possibly associating me with the clinical psychiatrist seated above the salt.

I had stolen the phrase from Frederic Myers, the great Victorian psychic researcher. Myers coined the term Paleolithic psychology as an erudite joke, to describe “the habits of thought of the savage who believes that can travel in dreams.” [1] He apologized to his respectable readers for “the apparent levity of a return to conceptions so enormously out of date” — while sowing the seed of doubt that “modern science” had actually surpassed the “primitive” understanding of the soul.

Myers chose the path of true science, which is always ready to revise the reigning hypotheses in the light of fresh evidence. “My own ignorance…I recognize to be such that my notions of the probable or improbable in the universe are not of weight enough to lead me to set aside any facts which seem to me well-attested.” He arrived at a “root-conception” of “the dissociability of the self, of the possibility that different fractions of the personality can act so far independently of each other that the one is not conscious of the other’s actions,” and that “segments of the personality can operate in apparent separation from the organism.” [2] Myers observed such phenomena in “true apparitions” of the departed, but also in “traveling clairvoyance” by living persons, which sometimes produce “phantasms of the living” that are visible in other places.

Myers’s contemporary Edward Tylor, who held the first chair of anthropology at Oxford, beautifully summarized the challenge to modern science that is posed by shamans and frequent fliers who are at home with the spirits and often journey in their realms:

"The issue raised by the comparison of savage, and civilized spiritualism is this: do the red Indian medicine man, the Tatar necromancer, the Highland ghost-seer and the Boston medium share the possession of a belief and knowledge of the highest truth and import, which, nevertheless, the great intellectual movement of the last two centuries has simply thrown aside as worthless? Is what we are habitually boating of and calling new enlightenment, then, in fact a decay of knowledge? If so, this is a truly remarkable case of degeneration and the savages on whom some ethnographers look as degenerate from a higher civilization may turn on their accusers and charge them with having fallen from the high level of savage knowledge."[3]

The basic insights of paleopsychology are as follows:

2.    We are not alone: we live in a multidimensional universe peopled with beings — spirits of nature, gods and daimons, angels and ancestors — who take a close interest in our affairs and influence our lives for good or ill.

3.    We are more than our bodies and brains, which are only vehicles for soul.

5.    Soul journeying is the key to the spiritual worlds and the knowledge of ultimate reality. The soul makes excursions outside the body in dreams and visions. The heart of spiritual practice is to learn to shift consciousness at will and travel beyond time and space. Through soul-flight, we return to worlds beyond the physical plane in which our lives have their source and are able to explore many dimensions of the Otherworld.

6.    Souls are corporeal, though composed of much finer substance than the physical body.

7.    People have more than one soul. In addition to the vital soul that sustains physical life — closely associated with the breath — there is a “free soul,” associated with the dreambody, which can travel outside the body and separates from it at physical death, as well as an enduring spirit whose home is on the higher planes.

8.    Souls — or pieces of soul — can be lost or stolen. This is the principle cause of disease and misfortune.

9.    Some people have more souls than others and have the ability to make excursions to different places at the same time.

10. At death, different vehicles of soul go to different lots. Through conscious dreaming, it is possible to explore the conditions of the afterlife to prepare for one’s death and to assist souls of the dying and departed.

11. We are born with counterparts in nature. For example, we are born with a totem animal and a relationship with natural forces (wind or water or lightning) that are part of our basic identity and help to pattern the natural flow of our energy.

12. We are born with counterparts in other places and times, and in other dimensions of reality. When we encounter them through interdimensional travel, they become allies and sometimes teachers.

Text adapted from Dreamgates: Exploring the Worlds of Soul, Imagination and Life Beyond Death by Robert Moss. Published by New World Library.

Image: Sketch of a Siberian udagan (female shaman) reconstructed from remains found in a burial site by the Lena river near Ust'-Uda by a Soviet era archaeological team led by A.P. Okladnikov.

Note the fringes on her costume. They suggest her ability to take flight like a bird and travel to the Upper World. In rock art from this era, shamans with wild fringes are shown flying with birds. "This ornithomorphic essence appears to have been the most ancient characteristic of the shamanic coat, and by extension its fringe was the most crucial symbolic element in its decoration." [Ekaterina Devlet, "Rock art and the Material Culture of Siberian and Central Asian Shamanism" in Neil Price (ed) The Archaeology of Shamanism (London: Routledge, 2001) 44]