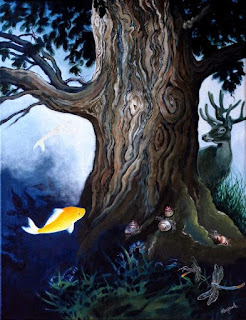 We can’t lose our way if we go to the root of things, to the roots of a tree. By finding the right tree — a tree you know that also knows you — you can reconnect with the soul of nature. You can find grounding for soul in this world, and a shaman’s ladder to travel between the worlds.
I once moved to a place in the country because of a tree, an old white oak behind the house that had survived the lightning. I knew it for a guardian of the land and a wise ancient. Sitting with that tree, I would have impressions of all the seasons it had lived. When I walked the farm road toward it, I would sometimes feel its silent greeting. Sometimes I watched the moon rise over the hills from up in its branches. The oak became a tree of my dreaming and a portal to the ancestors. Rooted deep in American earth, the oak also joined me to the ways of oak-seers of my bloodlines in the Old World, to the druids “grey, wood-nurtured, quiet-eyed" (as Yeats sang) to the sacred oak at Dodona where the Greeks listened for the voice of a god in the creak and rustle of the branches. After the first snows, when the cold stung my eyes, I saw that the oak still hung on to its leaves, longer than any other shedding trees on that land. Oaks hang on.
Spending good time with a tree that welcomes us is a great way to repair and renew our connection with the soul of nature. Trees have personalities, as individuals and as types, and sometimes we find they have a second personality that was not originally arboreal, a spirit from a different kinship group. In front of the farmhouse that I purchased because of the white oak was a great sugar maple. The patterns of the bark around the place where its broad trunk divided made the vivid likeness of an ancient Native shaman with a storm of gray hair and a long, twisted body. I learned later that there are legends in the Native traditions of Northeast America of shamans who have, in one of their soul bodies taken up residence in trees after physical death.


South of the farmhouse was an elderly apple tree that no longer gave fruit but still put out a few leaves in the spring time, and that let a few branches fall, which I burned in the hearth of the family room. The sweetness of apple, through pine and spruce and hickory, provided a kind of olfactory portal, and I would slip into conscious dreaming of ancestors for whom the apple branch was the passport between the worlds. North of the house was another great old tree, a shagbark hickory, that shed limbs as well as leaves profusely, as the deer sheds its antlers. I would often find antlers in the hickory hollow, dropped by bucks in the great herds of red-tailed deer that made their home in our woods, from which hunters were banned.
What trees call to you on country walks or from memory or dream? Any tree may be your soul tree, and it may also be your sole tree, the One Tree through which the three worlds of the shaman’s cosmos are joined, and which may become your ladder between them.

Text adapted from Dreaming the Soul Back Home by Robert Moss. Published by New World Library.

Art: "World Tree" by Annick Bougerolle
Posted by Robert Moss at 10:02 AM

For me the Oak holds a much welcomed stability for flight, for memory, or for simply sitting and being. In my journals I have found a few entries about the Oak and the Willow, they draw me to this longing. I wrote one piece on how they were for each other, a love. It speaks something about a mystery I have yet to unravel. From a dream a few nights ago of me floating over a possible future me on the couch with my new journal a third opened, I knew more then about this mystery. There was such a beautiful willow of many colored leaves drawn in the pages of my journal. The beauty of the energy of this dream was what is important to me. Two nights ago I started to do a study of the willow, including drawing. Yesterday I pass one on my way to a sister woman's house to celebrate mother's day.

This is a beautifully written tribute to our companions on earth, the trees.
When I was a girl, a very long time ago, there was a maple outside my second story window which I feel connected to to this day.

Oaks have always been my strength and solace and connect me with my ancestry , however as I deepen my connection to the land here in Western Australia the Casurinas with their long needles and extremely deep tap roots speak of resilience and magestic lady ficus trees spread open their graceful limbs inviting descent.

The sound of wind in the casuarinas in Queensland in my early boyhood is one of my strongest sensory memories from childhood.