Liminal Complaints, the Hag and the Goddess 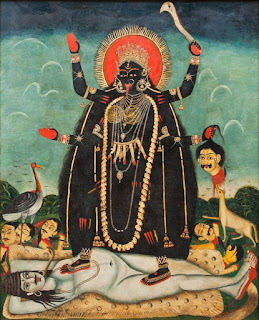 I'm fourteen years old and I've never been kissed. In the middle of the night, I feel a presence in my room. It's a woman, and she's coming towards me. She's little more than a dark cloud to begin with, but when she reaches my bed she is fully defined. She is a hideous, black-skinned hag, with multiple arms. Jouncing against her withered dugs is a necklace composed of rotting human heads.
I want to flee from this apparition, but I can't move. My body is completely paralyzed, except for my eyes, which are taking in everything.

The memory of this episode came flooding back while I was reading a lucid and helpful book on Sleep Paralysis by Ryan Hurd, Ryan writes from first-hand experience, and he makes a careful study of the varying explanations for this phenomenon, in which the sufferer lies dormant, unable to move, while ghosts and demons may appear to menace him, pressing down on his chest.  This condition is by no means unusual. At least half the population are estimated to have suffered from sleep paralysis at some point in their lives.

Ryan identifies high-risk communities (workers on night shift, insomniacs, the jet-lagged, college kids) . He offers clear, commonsensical guidance on how to minimize your risk of finding yourself in this state, basically: keep regular hours, get enough sleep, stay grounded, don’t forget to breathe. I confess that some of this was lost on me since I have never kept regular hours, fly constantly, sleep in two or three short bursts in a 24-hour cycle, and have been accused of having “no body clock whatsoever”.

We are coming to the most exciting part of Ryan’s book, in which he distinguishes himself from much of the literature by asking: What if sleep paralysis is not a curse, but an opportunity? What if this state is “a gateway for lucid dreaming”, even a spiritual initiation? What if the demon or the night hag is actually a guide who can take us on an amazing astral journey if we can go beyond our fear – and stop worrying about the body? Ryan knows that all these things are possible, and more, because he’s been there. So have I, but I’ll come back to that in a moment.

A word about words. “Sleep paralysis” is actually a major misnomer. Why? Because everyone who has experienced this condition knows that they were awake at the time.

It resembles sleep in two respects. First, in the muscular atopia – paralysis – which is a benign and indeed necessary state during sleep because it prevents us from acting out our dreams at the expense of the furniture and the family. Second, shapes from dream or nightmare may fill the space. We might add that “sleep paralysis” is most commonly experienced near sleep, coming or going. Still, it is not a state of sleep.

I would like to see us develop the verbal imagination to call it something more exact. If we are going to focus on the physiology, we could speak of muscular dyschrony, which would be to say that the muscles are out of kilter with time. A better term for the larger phenomenon would be liminal paralysis, which would feature its identity at a threshold state, on the border (for example) of being in and out of the body.

Let’s return to Ryan Hurd’s proposition – which will be shocking to many – that we can learn to love what I will now call liminal paralysis.

My terrified fourteen-year-old self can attest to this. His experience with the night hag did not end with the scene above. When she approached his bed and mounted him, he discovered that not every part of his body below the eyes was paralyzed. His story continues:
.
The black hag is on my bed, stamping on my chest. She lowers herself on her haunches. Despite my disgust, I am erect and now she is riding me. Her teeth are like daggers. My chest is spattered by blood and foulness from the rotting heads.
There is nothing for me to do but stay with this. I tell myself I will survive.
At last, the act is done.
Satisfied, the nightmare hag transforms into a beautiful young woman. She smells like jasmine, like sandalwood. She takes me by the hand to a forest shrine. I forget about the body I have left frozen in the wood.
She tells me, I am Time, and I give you power to step in and out of time. You can call me Kali Ma.
When I return, I am different.

In the days that follow, I write a cycle of poems that I title "Creatures of Kali". More than half a century later, I remember the first stanza of my adolescent verse:

In the darkness, a dark woman comes to me
softly, as the ticking of a clock.
I, in panic, cry out, "Go! I have no head for horror!"

But she smiles and wraps her four black arms around me
beating her bleeding necklace of skulls around my neck
and holds me captive through the night.

If we are willing to face our night terrors, we may find that the alien in the room is what is truly most alien to us, our own greater power. If we can endure the night hag, we may earn an encounter with the Goddess.
,
The book discussed is Ryan Hurd, Sleep Paralysis: A Guide to Hypnagogic Visions and Visitors of the Night (Hye
Posted by Robert Moss at 8:10 AM

My goodness, that was certainly a fascinating essay! I have experienced this condition many times in my life, but I have to say nothing as interesting as sex with Kali ever happened.
You have all the fun!

Seriously, it was useful to have the language descriptors for this state parsed so well. I don’t know about the whole panoply of demons thing—is that cultural? Did 14 year old Aussie you know about Kali? I did at fourteen, but neither she nor any of the demons, whoever they are, have ever appeared to me.

I’m not feeling bereft, mind you, just interested that both you and the author seemed to have had similar visitors and wondering why and what factors of gender and culture might be at play.