To converse with stars 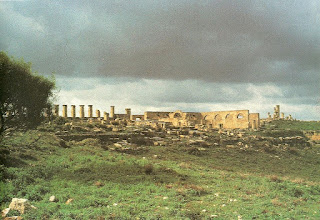 He lives in a world lit mostly by fire. The Roman Empire has recently been split into two. Rome, the capital of the West, will soon fall to the Goths. The barbarians are inside the gates of Constantinople, the capital of the East. His home city of Cyrene, in what is now Libya, is under constant attack by marauding tribes; he is often up on the walls, standing sentinel, or training his neighbors and retainers to fight back.

He comes from a noble family that can trace its lineage back to the founders of Sparta. He has the best education of his day; he studied with Hypatia, the great woman philosopher and scientist of Alexandria. In brief seasons of peace, he enjoys riding around his estates, sampling the olive oil and the honey from his bees and the milk from his goats. His great loves are books - in an age where nearly everyone is illiterate - hunting and dreaming. His name is Synesius of Cyrene, and we should know it better, because around 404 he wrote a treatise On Dreams that is (in my opinion) the most helpful book on the practice of dreamwork to appear in the West until very recent times.

In an era when the great oracles of the ancient world are being overthrown, Synesius reminds us that dreams provide us with "a personal oracle" that goes with us everywhere. All we need do is pray for a dream, wash our hands, and set our heads on a pillow. Dreaming matters because it shows us the future, provides creative inspiration, reveals different aspects of who and what we are, offers guidance on all the business of life - and above all, because it "uplifts the soul", raising us from our everyday confusion towards the level of Mind.

As a writer and orator, Synesius reports on how dreams corrected his literary style and gave him ideas for speeches that allowed him to catch the ear of an emperor. He observes, correctly, that recording and telling dreams is great preparation for public speaking, because it gives us training in telling our stories well. Some of that story material is of course extraordinary and challenges us to expand our ways of expression: "It is no mean achievement to pass on to another something of a strange nature that has stirred in one's own soul."

As everyday practice, Synesius urges us to practice dream incubation (asking our dreams for guidance), to study personal markers or "forerunners" in dreams that clue us in to whether those dreams may reveal future events, and above all to journal our experiences. He advises us to keep both a "book of the night" for dreams and a "book of the day" for our observations of signs and symbols in the world around us. By the universal law of sympatheia "all things are signs appearing through all things" and "the sage is one who understands the relationship of the parts of the universe."

For active dreamers, the very best incitement to go dreaming that Synesius offers may be this soaring passage in which he encourages us to embark on an adventure that will take us far beyond the laws of our physical universe:

There is nothing that forbids the sleeper from rising from earth and soaring above eagles, to reach a point above the loftiest spheres themselves. He may look down on the earth from far above, and explore lands that are not visible even from the moon. It is in the power of the dreamer to converse with the stars and to meet the hidden powers of the universe. [my adaptation of the 1930 translation of On Dreams by Augustine Fitzgerald]

In 410, the formidable Patriarch of Alexandria, Theophilus, persuaded Synesius to become bishop of Ptolemais. He was allowed to continue to live openly with his wife, to pursue his love of the poets who celebrated the old gods, and to practice and write about philosophy in the way of Plotinus. In the Hymns he wrote in his last years, we see Synesius making a marriage between the Christian revelation and Neoplatonist metaphysics, in verses that are sometimes very beautiful (but still await adequate translation). So we can call Synesius, at least retrospectively, the Bishop of Dreams. It is heartening to know that the early Church, in a time of violent contention, could make room for a philosopher who taught that we can become citizens of the deeper world by dreaming, and should allow no one to come between us and the sacred source that opens to us in dreams.