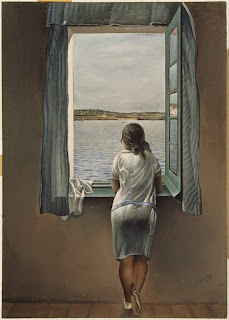 A nod to neuroscience: Like lucid dreams and vivid dreams in general, false awakenings seem to be most common in the early morning. Those who link states of consciousness to brain functioning would note that this is when there is an increase in subcortical activity associated with the circadian cycle.

Art: Salvador Dali, Figura asomada a la ventana (1925). Beyond the girl is the bay of Cadaqués in Catalonia, where Dali summered. Garcia Lorca, who also stayed here, said that life in Cadaqués was like a dream.
Posted by Robert Moss at 9:29 AM

I wonder if in the places where subtler vehicles are needed, if the mind, psyche is able to more easily create form from thought or creative wonderings? Talk about an experimental heaven for what if ers. Very interesting the neuroscience connection of subcortical with the circadian cycle activity. This is on that lovely edge of gleaning, but not knowing or understanding with any depth. I have only been able to hold my awareness a few times as I have dual attention with my astral body first waking up along side attention with my physical. Mostly I wake up in the middle of conversations or sensation cues and from there hold attention onward. I wonder if I have a subcortical response habit when trauma clicks in and I lose liminal attention? I think liminal practice is key to attention in the astral body. All this is very fun for me to grow a deeper understanding of. Thank you Robert.

One last thought, I think even more now the mindful practice of growing ones liminal state is rather healing of trauma, I don't seem to have as many trauma triggers or intense responses since I have practiced active dreaming techniques. My tendency was to go way into subtle realms, so beautiful and safe, but that doesn't help me live in this world. It was like I had an over stretched psyche muscle and skipped practiced awareness of the middle part, so lusciously healing for life in the physical body.

I love this! This is a very timely piece for me as I have just begun experiencing these false awakenings. Thank you so much for your work, Robert. You are an excellent mentor and guide.