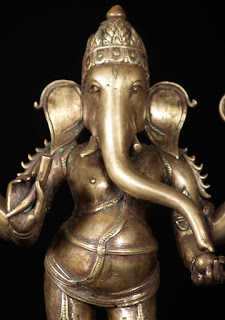 As many as are the aeons, so are the ways in which Ganesha's story is told.
- Shiva Purana

How do you get a god to write down your stories?
It is said, Lord Ganesha, that you agreed to take dictation from the sage Vyasa after he set his mind on you in deep meditation.
Did you agree because you knew that what was coming was a thing of epic proportions? Or did you suppose it would be something short, a poem to pleasure a goddess floating in a lotus pool?
Were you persuaded because the declared aim of the Mahabharata is to turn human minds away from war, to demoralize demons and soothe angry nagas? Or were you eager to binge on action movies, with the clash of armor, the delight of rounded dancing bodies, the tricks of war magicians?
When we think of inspired writing, we picture the human with pen or laptop as the one with the tiring fingers and aching buttocks, and the god – or muse – as a refined being fluttering overhead, whispering lines.
Here the situation is reversed. The human inspires, the god takes it down.
There was a deal, and a deception.
You made it your condition that Vyasa must never pause in his recitation. He must deliver the whole epic, verse by verse, all the way to the end. No room for hesitation or contemplation or even a snack or a pit stop.
He agreed, but then he tricked you. He requested that you should only record his lines when you had grasped their meaning. Being a god, you thought this was a meaningless condition; how could you fail to understand the mouthings of a mortal?
Vyasa was subtle. When he needed a break, he gave you verses so exquisitely complex and opaque that you had to stay your hand until you figured them out. Sometimes this required you to survey a hundred worlds in the knots of Indra’s net.
So Vyasa never lost his thread.
He went on so long that your tools were exhausted.. When the last feather pen snapped in your fist, he was still singing the doings of gods and demons, ascetic kings and lascivious maidens. You kept your side of the deal. You broke off a tusk to write down the last lines.
So tell me, Ganesha. How do I call a god to write my story? Must I allow my hand to be your hand? Must I sacrifice something as precious as your ivory tusk to complete the work?
I bring you sweet cakes and ripe fruits. They say your mother Parvati molded your body from sandalwood paste. I am dabbing sandalwood oil over my collarbones, and at my third eye. If I become you, Divine Scribe, then whose mind will dictate what I record with my hand?

Reading this I sense myself as the poet of my lives. Perhaps an evolution of a god like Ganesh. He who has come into a skill of braking off his tusk, like clipping a nail, to write of himselves or offering a tusk as license to another into the growth of poetic conscious writing of their own lives.