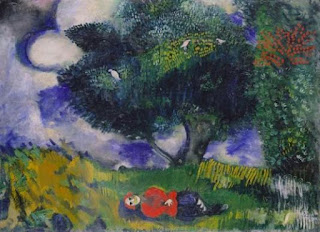 Poets, it’s said, are shamans of words. True shamans are poets of consciousness. Journeying into a deeper reality with the aid of sung and spoken poetry, they bring back energy and healing through poetic acts, shapeshifting physical systems. When we dream, we tap directly into the same creative source from which poets and shamans derive their gifts. When we create from our dreams, and enter dreamlike flow, we become poets and artists. When we act to bring the energy and imagery of dreams into physical reality, we become poets of consciousness and infuse our world with magic.
In Birth of a Poet, William Everson raised a clamorous appeal for poets to reawaken to their shamanic calling: "O Poets! Shamans of the word! When will you recover the trance-like rhythms, the subliminal imagery, the haunting sense of possession, the powerful inflection and enunciation to effect the vision? Shamanize! Shamanize!" Across the centuries, many of our greatest poets have recognized their kinship with the shaman’s way of shifting awareness and shapeshifting reality. As his name in a spiritual order, Goethe chose the name of a legendary shaman of antiquity, Abaris, who came flying out of the Northern mists on an arrow from Apollo’s bow.
Our earliest poets were shamans. Today as in the earliest times, true shamans are poets of consciousness who know the power of song and story to teach and to heal. They understand that through the play of words, sung or spoken, the magic of the Real World comes dancing into the surface world. The right words open pathways between the worlds. The poetry of consciousness delights the spirits. It draws the gods and goddesses who wish to live through us closer.
Shamans use poetry, sung or spoken, to achieve ends that go deeper than our consensual world. They create poetic songs of power to invoke spiritual help; to journey into nonordinary reality; to open and maintain a space between the worlds where interaction between humans and multidimensional beings can take place and to bring energy and healing through to the body and the physical world.
The South American paye takes flight with the help of "wing songs". These flight songs help him to borrow the wings of the kumalak bird [a kind of kite] that is a main ally of shamans.
Among the Inuit, the strongest shamans are also the most gifted poets. One of the reasons their spirit helpers flock around them is that they are charmed and exhilarated by the angakok’s poetic improvisations. Inuit shamans have a language of their own, which is often impenetrable to other Eskimos. It is a language that is never still. It bubbles and eddies, opening a whirlpool way to the deep bosom of the Sea-goddess, or a cavernous passage into the hidden fires of Earth.
My favorite Inuit shaman-word is the one for "dream". It looks like this: kubsaitigisak. It is pronounced "koov-sigh-teegee-shakk", with a little click at the back of the throat when you come to the final consonant. It means "what makes me dive in headfirst." Savor that for a moment, and all that flows with it. A dream, in Eskimo shaman-speech, is something that makes you dive in headfirst. Doesn’t this wondrously evoke the kinesthetic energy of dreaming, the sense of plunging into a deeper world? Doesn’t it also invite us to take the plunge, in the dream of life, and burst through the glass ceilings and paper barriers constructed by the daily trivial self?
Shamans know further uses for poetry. They use song and poetic speech call the soul back home, into the bodies of those who have lost vital energy through pain or trauma or heartbreak. From their own journeys, they bring back poetic imagery that can help to shapeshift the body’s energy template in the direction of health. Mainstream Western physicians agree that the body believes in images and responds to them as if they are physical events. By bringing the right images through from the dreaming, the poets of consciousness explain dis-ease in ways that help the patient get well, and interact with the body and its immune system on multiple levels without invasive surgery.
After attending healing sessions of Cuna shamans in Panama, French anthropologist Claude Lévi-Strauss explained how the poetry of consciousness is a healing art. "The shaman provides the sick...with a language, by means of which unexpressed, and otherwise inexpressible, psychic states can immediately be expressed. And it is the transition to this verbal expression which induces the release of the physiological process." Instead of giving an explanation of disease that leaves the sufferer powerless and "patient", the shaman explains disease through words and images that help the body get well - just as our dreams do. This is healing through dream transfer, a poetic act.
Let's recall the Inuit wisdom that with the poetic act, the worlds are joined and the sacred beings come dancing through. An old Inuit woman on Little Diomede Island explained to a Danish anthropologist that powerful spirits - like the spirit of the whale - must be summoned by "fresh words". "Worn-out songs" should never be used when you are trying to call on important spirits.

My new online adventure with The Shift Network, "Living Your Mythic Edge", is, above all, an invitation to become a poet of consciousness.
Adapted from Dreamways of the Iroquois: Honoring theSecret Wishes of the Soul by Robert Moss. Published by Destiny Books


Art: "The Poet with the Birds" by Marc Chagall
Posted by Robert Moss at 9:00 AM