The state of our soles 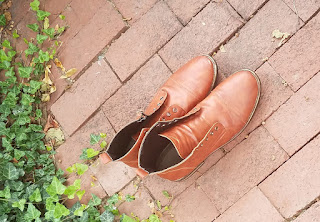 In dreams, the state of our footwear often suggests the state of our souls. You can hear the echo of "soul" in "sole". A dream of lost shoes may invite us to think about where on the roads of life we may have lost or misplaced soul. Sometimes you can reach back into that kind of dream in order to look for lost shoes, and that search may take you back to a place in your life where you lost something more important - vital energy and identity - that you can now reclaim.
Shoes not only have soles. They have ties, and the state of your laces or straps in a dream may say something about connections - "old ties" or new ones. A woman getting ready to attend a high school reunion in Manhattan dreamed she was urgently seeking shoes that would be comfortable for walking yet smart enough to suit her taste. A salesman in a fancy store persuaded her to purchase a pair of sneakers with laces made of genuine, but flexible, gold. She smiled at the thought that after all the years since graduation, her ties to her classmates were "golden", and that she would be comfortable with them in the big city.
A Freudian psychiatrist I know dreamed that her shoes were far too tight; they were torturing her feet and making it nearly impossible for her to walk. When she reflected on this, she realized that her Freudian approach was cramping her ability to do her job. She expanded her studies, embracing Jung and other approaches to the psyche and its healing. Now, in her dreams, her shoes usually fit just right.
In some dreams, we find ourselves wearing shoes that would be highly unlikely in regular life, except at a costume party. We seem to be cross-dressing, or wearing the footwear of a different historical period, or dispensing with shoes altogether in a primal landscape. When we inspect the bodies we inhabit in dreams of this kind, we sometimes discover that our dream self slipped into someone else's situation, in a different place or a different era. The state of our shoes in such dreams (and other details) may be a clue to connections within a soul family that includes personalities in different times.
That thought has been of great interest to me since I dreamed that I visited my favorite professor at a research institution where he was doing some remarkable work that involved pairs of shoes. The professor is Manning Clark, the famous Australian historian, who was a great friend and mentor to me when I was a student and a precocious lecturer at the Australian National University. Manning died in 1991, but I have had many intriguing encounters with him since.
In the dream involving shoes, Manning showed me that he is now busily engaged in studying "parallel lives". This meta-historical approach seems to involve tracking how choices made and actions taken by two people living in different times impact each other's fortunes, by a process of causation that you can only grasp if you can step outside linear chronology. One of the pairs Manning had selected for study was Lenin and Dionysius of Syracuse (a tyrant of ancient Greece). Each time the professor finished work on one set of parallel lives, he moved a pair of shoes to a different position on the far side of his desk. This was evidently a kind of tally, but I felt the shoes signified something more.
There is an angel of shoes, or more especially sandals, the most common footwear when his name was most commonly invoked. He is Sandalphon, and his name is still important in the pathworking and astral travel protocols of certain Mystery and kabbalistic orders. He wears sandals in the presence of his Maker, and leather footgear in the presence of Shekinah, the Divine Feminine. Some say he was once the prophet Elijah, or Elias. He presides over the astral body and the soul journeys we make in this vehicle. Some believe he watches over the big journeys that precede birth and follow death, which involve putting on and discarding "garments", like soft shoes.
In the Terry Gilliam movie "The Imaginarium of Doctor Parnassus", a well-heeled lady is whisked away to a paradise of shoe-lovers, and stilleto heels by top designer Jerome C. Rousseau dance along the seabed.
Common expressions involving footwear may provide clues to where your dream is walking. A few that jump to mind:

- Goody two-shoes
- if the shoe fits...
- well-heeled
- given the boot
- pulled himself up by his own bootstraps
- to know someone, you must walk in his shoes (or moccasins)
- if you were in my shoes...
- those are big shoes to fill
- get your skates on
- put on your dancing shoes

So - what's in your shoe closet, in your dreams?

For more on dreams that show the state of our soul - and can provide portals for soul recovery healing - please see my book Dreaming the Soul Back Home.

I had a lovely dream recently that was symbolic of "sole" but with socks, not shoes. The symbolism touched me so deeply. I dreamed I was laying down in what seemed to be the bed of a truck and I was very sleepy. Just as I was about to fall asleep my mom walked over with a full laundry basket. She dumped what was in it onto me. I didn't know what she had dumped on me until I woke up in the dream. Next to me in the dream was a guy who I am so attracted to in reality and he let me know that he had put the socks together in their pairs for me. When he told me that my heart became elated and I felt so in love with him. Reality check: Earlier that day I had been talking to someone about wishing I could find a soul mate and had joked that any soul mate of mine is likely dead. However, deep down I feel so connected to this guy I have met and what's even cooler is that synchronicity lead me to him.

Hello Robert. I love your piece. I love the sole - soul, homophone? But you have tied (laced) these terms, theses words so beautifully together. The sole is connected to the soul. I appreciate the connections you use throughout your piece, but also are you using sole as a metaphor for soul too?
I stumbled upon your blog, searching google in the webster online dictionary for the definition of journalling - can I use your quote "You don't have to be a writer to be a journaler, but journal keeping will make you a writer anyway", in an article I am writing on the benefits of journalling? Love that quote too and glad I stumbled, albeit, barefooted on your blog.
Thank you.
I look forward to reading more. Tessa

Hello Tessa,certainly you may quote me. Search this blog and yu'll find I have writen many peices on journal keepeing.There is even more in my book "Active Dreaming". I have published 26 books and know that my journal is the most important book I will ever write and one of the most important I willl ever read.