Dream Archaeology: The Columns of Siq 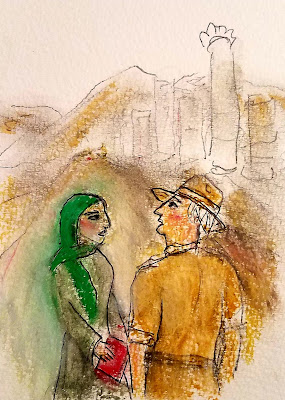 I returned this morning from an excursion to an archaeological site. I did not have to wait for my bags, clear customs and health checks, or catch an Uber home from the airport. Yet my travels were entirely real. I walked that site, studied it with the help of a guide and a little bilingual guide book, felt the sun and sand in my face, and gratitude for the warm water of that wadi. I felt goosebumps in the presence of stones that might be eidola, breathing images. My outing has given me a new research assignment in the field I call dream archaeology. I'm juiced, especially because I knew very little of the culture involved before my dream self traveled to Petra overnight.September 13, 2021

The Columns of Siq

My guide is a younger woman, Arab or Turkish, wearing a hijab. We are walking around a vast archaeological site in the desert. We came through a dark, narrow passage lined with niches and columns, some natural, some carved from the rock. Some of the stones around us give the impression of humanoid forms, perhaps of gods or jinn.

“This place is protected by them,” she tells me. She gives the protectors a name I can’t quite understand. Is it “The Daniels”?

The place, or some part of it, is called Siq. I see it in a section head in a little bilingual guidebook. Between us and the barren mountains, on a rise, is a ruined colonnade. I have the sense that there is life in these stones, even the ones that may have belonged to a Roman marketplace. Perhaps holographic memories of what happened here.

She walks me up a hill. I feel sun and sand on my skin. I am getting very thirsty, in the dry heat. There is water below us, across a slope of fine greyish sand, apparently rich in metal content. I enjoy the walk down. She tells me, again, “This place is protected by The Daniels.” Again, I can’t quite get the key word.

The pool is very shallow, perhaps only the last of water that fell in the last rains. But we are now in welcome shade from the mountains and I long to drink. I reach down into the water with cupped hands.

I am surprised when she tells me that I need to go to Cyprus. She says she has family there. Is she also telling me that cousins of "The Daniels" are there? I know Cyprus is the island of Aphrodite. I tell my companion that I have always wanted to go to Cyrus, because “I have a relationship with Aphrodite.” Whoops. I must avoid provoking the goddesses again.

Feelings: Excited, intrigued. Just so: this was an entirely real experience, engaging all the senses.

Reality check : The word “Siq” was crystal clear but I did not recognize it. An online search told me instantly that it is the name of a long passage through a narrow gorge leading to the ancient city of Petra in Jordan.  Siq means “gorge”. It is lined with niches that once held “god-stones” called baetyls or betyls. Some were meteorites. It is speculated that the ancient Nabataeans thought they contained the energy of gods, and that contact with the stones could open a portal to other worlds. I suspect that what I heard as “The Daniels” was actually “The Betyls”. The Arabic is betel. Related to the Hebrew Bethel, “House of God” as in the place where Jacob had an immense night vision while sleeping on a stone he afterwards set up as a column. I see that Wendy Doniger, the religious scholar, thinks that the betyls in their niches – they have counterparts in many cultures - were the first of all altars.

If you want to know what I mean by "provoking the goddesses" read my story "How Much Ephesus Have You Had?" in Mysterious Realities.

Action: I love taking on the research assignments my dreams give me. In my memoir The Boy Who Died and Came Back I give detailed reports on the dream archaeology missions that have taken me into other times and other lives. I have barely started to follow up my visit to Petra and the magic stones. The dreamer and the independent scholar in me look forward to more discoveries.

Follow-up: Pillars of the Goddess

I had just started my research when a friend found a report by a German scholar who surveyed hundreds of betyls at Petra.  This added some interesting leads. The style of Nabataean religious art was basically aniconic; in other words, not figurative, though stones were sometimes given a hunt of anthropomorphic form.

It was notable many betyls were dedicate to al-Uzzah, the mother goddess of Petra, or to Allat, the Great Goddess worshipped especially in the Arabian peninula. Some of these betyls had "eyes" in the form of simple rectangles, or twin stars. "The eyes can be interpreted as the morning and the evening stars, the two aspects of the planet Venus." [1] The betyls of Petra were typically set in niches on bases,. Quite a few were carved from free-standing stones and could be carried in procession. 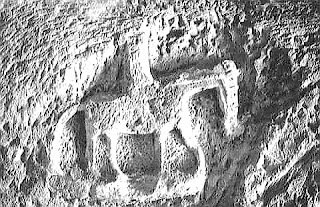 A relief carving from Bab al-Siq ("Gate of the Siq") shows a betyl being transported on the back of  horse of mule. Some betyls were simply carved from rock walls.

Where stone was quarried for such purposes, efforts were made to show respect to Dushara, Lord of the House among the pantheon at Petra, whose energy was strongly felt in sacred stones. Columns were left standing in his honor. Other standing stones around Petra were for the nephesh (the same word as in Hebrew). The nepheshes held spirits of the dead rather than the energy of the gods. 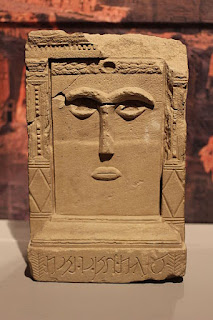 I later found photos of an unusually anthropomorphic version of the "eye-betyls" of Petra. It stood in a niche in the wall of the temple of the Wnged Lions and is believed to represent al-Uzza or Allat. The eyes here are almond shaped and the nose and lips are formed naturalistically. The face is crowned by a wreath with an opening in the center that mikght have held a jewel or a horn. This iamge,carved from limenstone in the 1st or 2nd cetury of the common era, may reflect syncretism between Nabataean religion and the Isis cult.

Journal drawing: "The Columns of Siq" by Robert Moss

I love hearing you tell your dreams and I hope to become as proficient in dreaming as you.