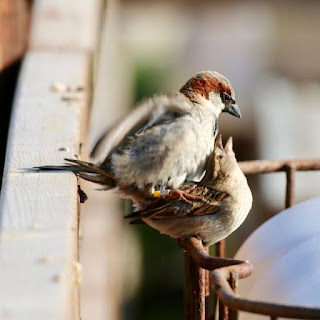 Jung was a master of navigating by synchronicity. His practice in this field is, to my mind, far more impressibve and instructive than his theory. He practiced pattern recognition, noticing what was going on in his field of perception as he wrestled with an idea or tended to a patient, following the wind and waves on the lake, the rustle of leaves and the cries of animals and birds in the woods near his house.

I came upon a choice example of how he used coincidence to get a second opinion on dreams - and sometimes to get a point across to a dreamer who seemed to be missing the point.

A patient whose dreams seemed to Jung to be full of strong sexual imagery declined to look at this aspect of her dream life, drifting off into associations that seemed to Jung to be far removed from what the dreams contained. His efforts to get her to look at the possible sexual content did not prosper until, on the day of the woman's next appointment, a pair of sparrows fluttered to the ground at her feet and "performed the act" right in front of her.-

This incident, recorded in the notebooks of Jungian analyst Esther Harding, recalls the famous epiphany of the scarab that Jung recorded in Memories, Dreams, Reflections. He felt stuck in his analysis of another female patient until the session in which she recounted a dream of a scarab, vitally important to the Egyptians as a symbol of rebirth. At that instant, Jung heard something scraping at the window of his consulting room. He opened the window and caught in his hands a flying beetle known as a rose-chafer, the closest thing to the Egyptian scarab that was likely to be found in Switzerland. He presented the golden-green beetle to the woman, saying, "Here is your scarab" , and noted this as the breakthrough point in her analysis.-

These episodes are fine examples of how (to borrow from Richard Tarnas in Cosmos and Psyche) "spontaneous archetypal resonance" can act as "a healing solvent on the hardened polarities - between self and world, subject and object conscious and unconscious - of the person experiencing the synchronicity."

Attend to synchronicity, as Jung did every day,and you may become a magnet for it.