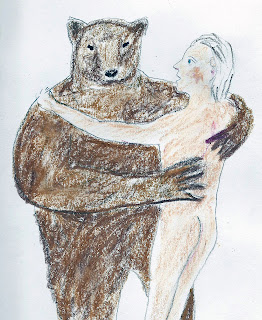 One night I found myself deep inside an ancient warrior cult of the Bear Goddess. As soon as I lay down and closed my eyes, in the early hours of the morning, a portal opened. It appeared as an ancient stone gateway immensely tall in proportion to its width. Through the dream gate, I saw warriors armed with axes, spears and swords were marching to battle. They wore leather armor of a type I thought might be Romano-Celtic. Above them fluttered the banner of a Bear Goddess; the standard bearer wore the full pelt of a bear.
My curiosity became intense. I zoomed in on the scene, then my consciousness joined one of the bear warriors. I felt the heat of the bear skin over my body, and the heat of the coming battle. The body I had joined was compact and heavily muscled. But I did not want to be present for the hacking and killing that was about to begin.
I seemed to jump across time, into a different season, when the leaves were gone from the beeches and oaks. Still in leather armor, I stumbled alone through the wilderness. I was tired of battles, weary of slaughter. I was ready to die. I abandoned my weapons, and stripped off the bear skin that had been stained by the blood of battles and the grime of life. I lay down among the roots of an oak. But I was not alone. A bear cub, walking on two legs, took me by the hand and led me to a place of healing. The doctor here was a huge mother bear. She opened my chest and took out my heart. She rinsed the organ carefully and replaced it in a soft green bed of moss and herbs. Grateful and amazed, I looked around the space I was now in. The hut was full of natural remedies and charms, herbs and spices, dried lavender and other flowers. Dried lavender was laid around my neck, like a necklace.
I emerged from this lucid dream adventure feeling blessed and healed. I also recognized that, not for the first time, I had been taken into ancestral territory and challenged to make some choices.
There were gifts here to be shared with others, and very soon the world gave me a remarkable opportunity to do this. I led a workshop in Santa Fe the next weekend, at a center not far from Bear Canyon, where I found a white quartzite stone in the natural shape of a bear’s head; I gave this to a man who had been diagnosed with a life-threatening illness. One of the people who came to that workshop was a most reluctant participant I will call Bella. She, too, had been diagnosed with a serious illness and felt that her life, at this time, was a “train wreck”; she had recently lost both her job and her marriage. She did not remember dreams, was skeptical about shamanism, and was basically there only because friends had dragged her to my workshop. She sat with her arms folded tight over her chest, resisting all efforts to turn her into an active participant. I wondered whether she would make it through the morning.
But Bella was still with us after lunch, when I had decided to introduce a new game. I set an intention for my own dreams the night before: “I would like a new game to play in this workshop.” In my dream, I saw my group swapping story cards, regular 3”x5” index cards on which each participant had been invited to write something with story value; this might be part of a dream, or a life memory, or something experienced in a journey with the drum, or the product of pure imagination. The cards were made into a deck and shuffled. Then people drew from the deck at random, read out what was written on their cards – and then pretended that this was part of their own story. They were now required to make something up to dramatize that story, or expand it.
I followed my dream directions exactly. When the cards had all been written and distributed, I span my drumstick to pick the first person to play. It pointed to Bella. I groaned inwardly, thinking, That’s the end of this game. Bella turned over her card with evident reluctance and read out what was written on it. This was the text:

I am a warrior in leather armor in an ancient army that marches under the banner of the Bear Goddess. Tired of battles, I go into the wilderness to die. But a bear cub takes me by the hand and leads me to a place of healing.

Bella coughed. She got to her feet, but then her legs folded and she lay full-length on the floor, making the sounds of dry retching. She crawled a few feet, then croaked her own lines. “I have been fighting in the army of the Earth Mother. I have been fighting for clean water and clean air. But I have lost my battles and I can’t fight any more. I have come here, into the desert, to die. But bear cub won’t let me leave. She brings me to a healing shack, where my organs are regenerated. I don’t have the disease anymore. Now the Mother Bear places dried lavender across my throat, and I smell its sweetness.”
She had most of us in tears. She had taken the story on the card — the card I had written, of course — and made it her own. She had moved the action from the Northern forest to the desert of the Southwest, where she lived. She had defined the field of battle as the environmental cause she had been fighting bravely, but without success. She had shifted the symptoms to the area sof her body affected by her own disease.
When she returned to her place in the circle, the woman seated next to her opened her journal and took out a sprig of dried lavender. “You mentioned dried lavender, so I would like you to have this.” Bella let her neighbor place it across her neck. I must note that although dried lavender was in my original dream, I had not mentioned it on the card I wrote. Two secret handshakes from the universe.
At the end of the day, Bella stood before the group to thank us, and the Bear. “I am going to let my body believe. I am not going to die the way the doctors said. However I die, I will die standing up. And I will fight the good fight in the ways that Earth Mother teaches me.” 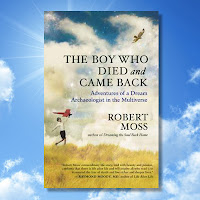 Adapted from my book The Boy Who Died and Came Back. Published by New World Library. This was the first time I introduced a version of my Coincidence Card Game, which we now play in several versions in my playshops all over the world map. We experiment with a digital version, with exciting results, in my new online course for The Shift Network last night. Please see my book Sidewalk Oracles for guidance on playing the game with friends, and developing a solitaire version.

Drawing: "Dancing with the Bear" by RM

Have you posted this exact post before? I feel like I've read it before and I don't know if this is déja vu or if you're repeating a post. (Although I have your latest book, I haven't read it yet, so it's not that I've read the story there.)

I had a bear dream recently that I now think I need to revisit...

Do you have "The Boy Who Died and Came Back"? If so, whether on not you got to Part 4, maybe the Bear came through to you by osmosis. If not, maybe you time traveled in a dream to when you will read the book, from which this story is adapted. "Sidewalk Oracles" is my latest book.

Ah, apologies for confusing two of your books! I have read "The Boy Who Died and Came Back," so that's why this story is so familiar. Thanks for clearing that up. And thanks, too, for the nudge to spend more time with my bear dream!

I've read it before and it remains a very impressive story