A dream doorway to Inanna 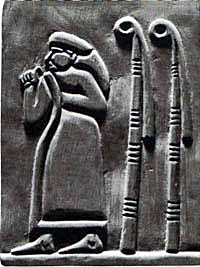 riding out on your wild blue bull
through the Gate of Wonder.

I am riffing on a version of "Inanna and Ebih",  written by the high priestess of the Moon God at Ur around 2300 bce. The literal translation is in Betty De Shong Meador's brilliant Inanna, Lady of Largest Heart.
I was excited to learn that Meador was called to the great Sumerian goddess Inanna by a dream . She dreamed she saw two fellow Jungian analysts – conservative, by-the-book types - being buried. Strange sticks with loops at the top were planted in the earth around their graves.
At the time, Inanna was unknown to her and she made no association between the dream and the goddess.  Long after, in one of Erich Neumann’s books, she found a picture of the looped poles like the ones in her dream. She read that they are symbols of Inanna and the earliest way of writing her name in pictographs. They are reed posts. They may represent door posts, or the props for a curtain. In pictographs (see photo), reed pieces hanging down from the rings, sometimes look like women's hair, or ribbons.
Why would doorposts made from reeds be a symbol for the Queen of Earth and Heaven? Doorposts of this kind could denote the passage to the storehouse,the place of fertility and abundance that are the gifts of the goddess in her beneficent mode. Doorposts could also denote the passage between the worlds. Inanna herself passed through a series of doorways in her famous Descent to the Underworld. So the reed doorposts - in a country with little timber or stone - could be the Mesopotamian version of the pylon gate in Egypt or the dolmen arch in Celtic lands.
There is further significance in the reeds. In ancient Mesopotamia, dream incubation took place in reed huts.You would step between reed doorposts to dream with intention, maybe to dream yourself into a close encounter with the goddess herself. The marshes of southern Mesopotamia, full of reeds, offered a liminal dreamy landscape. Legend has it that Sargon of Akkad, the father of the priestess who wrote poems and hymns of Inanna was abandoned in a reed basket, sealed with pitch, on a river,  to be found by the gardener who raised him.  A baby from the reeds, long before Moses.
Meador waxes poetic about the reed posts of Inanna as “insurgent flags”. In her words, “Inanna’s symbol standing tall on the graves was an image of strength and courage from a culture outside of and alien to patriarchal thinking... Inanna’s tall reed standards stand like insurgent flags amid the bastion of traditional beliefs that restrict women.” The meet-up between the old dream and new research into the mythic cycle of Inanna led the Jungian analyst to make a huge new leap in her work and understanding, into Goddess realms. "This new perspective propelled me onto my future path.”
As Meador studied the texts, she found Inanna's wild call for her chosen lover to plow her field. The goddess calls for Dumuzi, who is both the "wild bull" and the plowman:

My field needs hoeing
Dumuzi, I call you
It is you I want for prince.

Inanna is many, a great goddess who refuses all boundaries and limitations. For Meador, she is the Sumerian “personification of the whole of reality”.

You wear the robes
of the old, old gods.

Meador discovered a soul friend in ancient Mesopotamia. She happens to be the first named author in all of human history. Her name is Enheduanna. The "en" in her name means "high priestess". She was the daughter of King Sargon of Akkad and high priestess of the moon god Nanna. She was also a poet of the first rank, and the most passionate of her poems were devoted to presenting Inanna in all her faces. She composed 42 temple hymns that have survived  and the "Exaltation of Inanna"(Nin-Me-Sar-Ra) infused with her passion for the goddess.
It is really absurd that Enheduanna is relatively unknown. She is the first named author in world literature. She is a great poet. She is advancing a whole theology and philosophy that promotes the great Goddess as the one beyond the many. She writes with searing passion and eloquence about the many aspects of the self. The goddess she praises – in all her dark and light – is within her, and within the whole of nature and the whole cosmic order. Both contain multitudes.
Meador writes that “in Enheduanna’s writing, we witness that moment when an individual is selected out of the mass of humanity into a new consciousness of self-definition and self-worth...Enheduanna begins to understand emotion as the graze of the goddess’ hand across a person’s soul. Image and emotion become the language of the goddess to the particular individual.”
Called to the goddess and the ancient poet through the doorway of a dream. Goddesses and dead poets can make that happen. I know about this.

Quotes here are from Betty De Shong Meador, Inanna, Lady of Largest Heart: Poems of the Sumerian High Priestess Enheduanna. Published by University of Texas Press.
Posted by Robert Moss at 7:26 AM

Robert, I had a dream a couple of months ago in which I was in a very tall building, holding a baby in my arms, standing with a man (my husband?) in a covered balcony near the right corner of the building. I was supposed to navigate the corner of the building--stepping out of the covered balcony--to another balcony around the corner. I knew I couldn't do this, as I needed to protect the baby, and I was terrified. The baby's name was Inanna. I refused to do it.

I had no real acquaintance with the Goddess Inanna, so I awakened very puzzled by this dream. Some have suggested that the baby was my new novel, which was about to be published. But I sense it has deeper meaning. I am still curious.

This would speak to me very directly about my need to grow my understanding of the mythic cycle of Inanna. That, in itself, is a profound undertaking. I would want to learn about baby stories connected with the mythos. I would make a connection with the story of Sargon (the father of the priestess-princess who gave us many of the hymns and poems of Inananna) who was abandoned in a reed basket on a river, to be found and raised by a gardener - a Mesopotamian Moses in the rushes, long before Moses. If it were my dream, I would try to reenter it and find out what is in that building, who is the man, and what I need to do with the baby.

On 1/2/16 I had a dream that the Mother gave me tuition to go to this school of learning. As I drove there and made it past a couple strange tests, I was admitted. Got my assigned room number and was on the 200th floor looking at the black hallways with individual dorm rooms with their unique colors of lights. The double doors were all painted in classical style. I saw A Venus door open with these young light haired women be hide the door. I looked at myself and I was young also, but my hair was not light colored. Then my guide, the young man in the black coat came and said he knew where my room number was. As I gave him the ticket I saw it was 1504 or 1508. We wound around toward the thousandth floor and I knew I was not in a building, more like cavern. I paused to talk to long distant relatives. He did not want to pause and as he moved ahead of me he said a word I didn't know. I wrote it as HeroFanny. Then reading from Mircea Eliade's book, Shamanism, I found the word; hierophany. Perhaps Inanna in her descent to the underworld had several reasons for the trip; 1. to bring back the much needed wild bull, plower (and Shepard?) demigod. I imagine sex and the gods have broader meaning then human sexual relations. I like what Micael Rice says in The Power of the Bull. I feel perhaps there is a need for an infusion of wild bull back into the moderni herd. I wonder about figure 8.2 in his book. Could those be the same reeds you are writing about, the ones restraining the bull? I rather like this goddess. What if she descended knowing that she would gain a deeper working skill of sacred breakthroughs for an Earth she is tethered to? I have a predujuice I must admit. I believe women are better at holding both the light and dark within themselves,, working them together. And I do feel sometimes a storm in me at the patriarchal upbringing I had to endure.

Dear Patricia, thank you for your intriguing dream report and your fascinating comments. In the way of synchronicity, I reread Michael Rice's chapter on the Bull in Mesopotamia in "The Power of the Bull" last night, and could easily pluck off the top of my reading pile to study figure 8.2.Yes, I suppose those restraints could be cords woven from reeds.

Thank you, especially, for "HeroFanny". I love it and will use it! Though I love wordplay it had never occurred to me because I pronounce hierophany as "High-ro-phany". Eliade's life work could be described as the quest for hierophany; the theme runs through most of his books, fiction as well as nonfiction. And, as you may or may not know, it was a remarkable encounter with the long-dead Eliade in the Carpathian Mountains several years ago that made me know that I must find my own meanings for the Inanna-Dumuzi story, harder (as you certainly know) for a mere man than for a woman.

I am intrigued by your experience in the Carpathian Mountains. I don't remember reading that story. Is it on your blog site? In dreams, on top, in and under a mountain have different meanings for me. I feel this dream as caverns in a mountain. It is kind of funny that I wrote HeroFanny. I knew it wasn't the word spoken in the dream, but it made me laugh to write it that way. When I got my eldest to say hierophany for me, I was thrilled because I knew that's what was spoken. Am very interested in your encounter with Eliade.

Here is a piece of that story, Patricia. More to come in a future book. http://mossdreams.blogspot.com/2013/10/mircea-eliade-and-flow-god.html