If it looks like a duck: A tiny tale of dream precognition 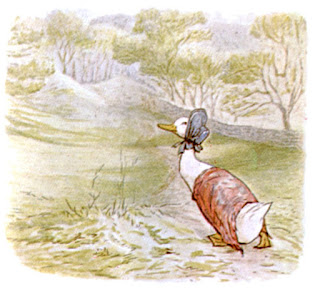 I love the small examples of a meet-up between a dream and a subsequent event that remind us that we want to ask, of any and all dream material: Is it possible that elements of this dream will manifest in some way in the future? Here's my example from New Year's Day, featuring my 20 pound miniature Schnauzer, Oskar.
Dream Vignette (from the early hours)
My little dog Oskar is excited by people coming and going outside the house. When the street door is opened, he rushes out. He bounds up, nearly clearing top of the ironwork gate. He is almost over, and out in the street, when I manage to grab him and pull him back.      The lady on the street reminds me of Jemima Puddleduck. She has several children with her, following along like ducklings.
Feelings: Mild amusement
Reality: Oskar does get excited by people near the house. Typically, he will rush at other dogs or squirrels. Or sometimes at ducks in the park. But ducks are unlikely on our street.
Follow-up
Three hours later, I am walking Oskar around the lake in the park. He becomes very excited by ducks at the edge of the water, at the bottom of a 10-foot drop. As he rushes towards the edge, I realize that my dream is starting to play out.
I move faster than I may have done otherwise because of the rehearsal. He is halfway over the drop when I manage to grab him and pull him back. He would never have been able to get back up that near-vertical drop into the mud, and it would have been a long walk to a place where he could get back on the path, by which point he would have been a mud pie.
Posted by Robert Moss at 6:52 PM