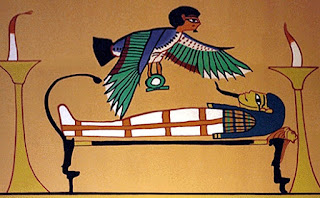 The ancient Egyptians understood that in dreams, our eyes are opened. Their word for dream, rswt, is etymologically connected to the root meaning “to be awake”. It was written with a determinative symbol representing an open eye.

The Egyptians believed that the gods speak to us in dreams. As the Bible story of Joseph and Pharaoh reminds us, they paid close attention to dream messages about the possible future. They practiced dream incubation for guidance and healing at temples and sacred sites. They understood that by recalling and working with dreams, we develop the art of memory, tapping into knowledge that belonged to us before we entered this life journey, and awakening to our connection with other life experiences. 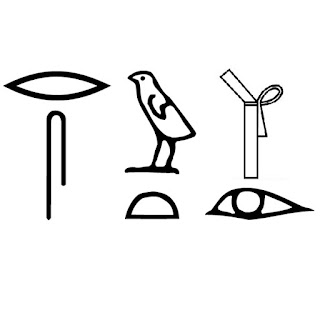 The Egyptians also developed an advanced practice of conscious dream travel. Trained dreamers operated as seers, remote viewers and telepaths, advising on affairs of state and military strategy and providing a mental communications network between far-flung temples and administrative centers. They practiced shapeshifting, crossing time and space in the dreambodies of birds and animals.
Through conscious dream travel, ancient Egypt’s “frequent flyers” explored the roads of the afterlife and the multidimensional universe. It was understood that true initiation and transformation takes place in a deeper reality accessible through the dream journey beyond the body. A rightful king must be able to travel between the worlds.
It seems that in early times, in the heb sed festival, conducted in pharaoh’s thirtieth year, the king was required to journey beyond the body, and beyond death, to prove his worthiness to continue on the throne. Led by Anubis, pharaoh descended to the Underworld. He was directed to enter death, “touch the four sides of the land”, become Osiris, and return in new garments – the robe and the spiritual body of transformation.
Jeremy Naydler’s Shamanic Wisdom in the Pyramid Texts makes a convincing case that the palace tombs and pyramid texts of Egypt are about much, much more than funerary arrangements; that the Egyptians traveled beyond the gates of death while very much alive, not only to bring back first-hand knowledge of the afterlife, but to enter into sacred union with the gods and enthrone their power in the body, and so acquire the spiritual and sexual potency to marry the worlds.
The dream guides of ancient Egypt knew that the dream journey may take the traveler to the stars – specifically to Sothis or Sirius, the “moist land” believed by Egyptian initiates to be the source of higher consciousness, the destination of advanced souls after death, and the home of higher beings who take a close interest in Earth matters.
When we look for ancient sources on all of this, we are challenged to decode fragmentary texts, some collated over many centuries by pious scribes who jumbled together material from different traditions and rival pantheons.  Wallis Budge complained (in Osiris) that “the Egyptian appears never to have relinquished any belief which he once had”. We won’t find what we need on the practice of ancient Egyptian dreaming in the fragmentary “dream books” that survive, any more than we’ll grasp what dreaming can be from the kind of dream dictionary you can buy in drugstores today.
We gaze in wonder at the Egyptian picture-books displaying the soul’s journeys and ordeals after death – and the many different aspects of soul energy that survive death – and quickly realize that to understand the source of such visions, and the accuracy of such maps, we must go into a deeper space. We must go to the Magic Library.
In Hellenistic times – the age of Cleopatra – dream schools flourished in the temples of Serapis, a god who melds the qualities of Osiris and Apis, the divine bull. From the 2nd century BCE we have papyri recording the dream diaries of Ptolemaios, who lived for many years in katoche, or sacred retreat, in the temple of Serapis at Memphis. A short biography of the dreamer has been published by the French scholar Michel Chauveau in his book Egypt in the Age of Cleopatra. Ptolemaios was the son of Macedonian colonists, but like ancient Egyptians he was called to the temple by a dream in which the god appeared to him. He seems to have lived for years as a full-time dreamer, whose dreams guided him not only in his spiritual practice but in handling family and business matters beyond the temple walls.
In this later period, the Egyptian priests who specialized in dreaming were called the Learned Ones of the Magic Library. What marvelous promise is in that phrase! What profound recognition of the magic and wisdom that is available to us through dreaming!