Swinging with Hermes on the Hinge of Fate 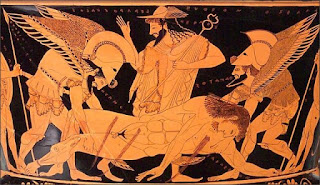 He is always in motion; he belongs to the journey (hodios); his home is the road itself. He is the angel of the Odyssey, the angelos, the messenger of the gods. He is “the quick one”, especially as angel of death. He is dios eriounios huios, the “swift as death son of Zeus.” He was born in a cave, through the mating of Zeus and a primordial goddess, Maia, who was shrunk in the later phallocentric theology to a mere nymph.
He is ruler of dreams (hegetor oneiron) and guide of souls (psychopompos). The dream people of Phaeacia – who rescue Odysseus and send him safe to the harbor of the soul – make offerings to Hermes before going to sleep. (Odyssey Book VII, 138).
He is the embodiment of synchronicity, and his oracles speak through natural events that convey supernatural meaning. The oracle of Hermes at Pharai, in the Peloponnese, was located at the center of a walled market, where there was a simple rough-hewn statue of the god. Consulting this oracle was as simple as this:

You enter the market through the gate in the wall towards the close of business, as the vendors are packing up their stalls. You bring your question for the oracle with you. You walk to the statue of the god and whisper that question in his ear. Then you plug your ears, or press your hands over them, shutting out external sounds as you walk back to the gate. At the exact moment you reach the gate, you unplug your ears. The first sounds you hear – a snatch of conversation, the cry of a bird, the creak of an overloaded wagon – will be the response of the oracle. The god will speak to you directly through the everyday noise of the world, once you have set a clear intention and put yourself in a frame of mind to receive the message.

Hermes is “the friendliest of gods to men” but his actions are unpredictable, and he begins his career as a thief. He bestows on humans the gift of fruitfulness. The stroke of good luck, the windfall, is named after him in Greek; it is a hermaion. He can be roguish, and shameless in singing bawdy, teasing songs over his lyre, strung on a tortoise shell. He sings of love and riches. He tells the tale of his own begetting, the lusty embrace of his parents in their secret union in the cave. He carries memory. He has great appetites – for meat, for sex, for song, for improv. He is of the night.
According to the Homeric Hymn to Hermes, Zeus fathered Hermes by making love to Maia, then oldest of the Pleaides, under cover of dark in a cave. When she delivered Hermes, Maia bundled him up in warm fleeces and fell asleep. Hermes is quick. Within hours, the newborn baby had crawled to Thessaly. Before nightfall the next day,now fully grown, he had stolen some of his half-brother Apollo's cattle and invented the lyre by stringing a tortoise shell. Hermes' theft of the cattle caused a dispute among the gods that was resolved only when Apollo agreed to receive the lyre as payment for his cattle.
In the older strata of the myths, preserved by Cicero in De Natura Deorum ("On the Nature of the Gods"), Hermes is the son of Heaven (Ouranos) and Bright Day (Hemera); Aphrodite is their daughter. He is the escort of the goddesses – on the reliefs he is always leading three of them. He is the lover and ally of the feminine world of springs and caves, trees and streams. He is the primal lover, seminal in every sense. He has associations with water; at Pharai he has a sacred fishpond. He is one of the consorts of Hecate, who also presides at crossroads and is a keeper of gates.
He manifests a world, a world of spontaneous creation and fluctuation. The great mythographer Karl Kerenyi, colleague of Jung, struggled to explain this in his elegant little monograph Hermes, Guide of Souls:

The sum total of pathways as Hermes’ playground; the accidental “falling into your lap” as the Hermetic material; its transformation through finding – thieving – the Hermetic event – into an Hermetic work of art, which is always something of a tricky optical illusion, into wealth, poetry and every sort of evasion from the restriction and confinement imposed by laws, circumstances, destinies – how could these be merely psychic realities? They are the world and they are one world, namely, that world which Hermes opens to us.

Hermes, Kerenyi declares, is “the source of his own world”.
He is the masculine aspect of the life force, represented as the herm, the phallus.
His phallus is a pivot between the worlds. We begin to grasp this sexy mystery when we find a carved phallus used as grave marker. There is a stone phallus three feet high inscribed with the name and portrait of an ancient Greek woman named Lysandra of Alexandros. Priapus, the god of the permanent hard-on, according to some a son of Hermes, is a guardian of graves and gardens. Seed is also soul. On an Attic black-figured vase, an ithyphallic man blows on a double flute as he ejects four drops of semen towards a large fluttering butterfly – which appears to be emerging from the first of the drops.
Hermes embodies the phallic and active principle, reigning over the rebirthing of souls. Hermes steps through the door with a hard-on, as men often transit from the dream world to the waking world, and hanged men, universally, enter the afterlife. Hermes is penetrating, and this is the effect of synchronicity. It pushes through, it opens up, and it inseminates.
He is depicted wearing winged sandals, and a winged traveler's hat, and bearing a caduceus.
Hermes is one of the great mythic Gatekeepers. Through him, every house opens into the Otherworld. One of his names, sotheos, means The Socket, as in the socket of a hinge that enables the pin to turn and the door to open and close. So we can think of him as a Hinge guy – as in “hinge of fate” – or a Pivot. As he swings, so do our fortunes.

Image: Hermes watches Hypnos and Thanatos prepare to carry the fallen hero Sarpedon back to his homeland in Lycia. Painting from the Euphronios krater (c.515 bce), now in the Archaeological Museum of Cerveteri.

A gorgeous, thorough discussion/description of Hermes with lots of extra material I hadn’t known before.
Thank you!