A shining tarot from the dark places of wisdom 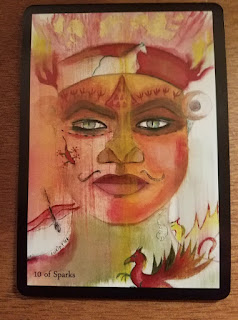 My very sparky card of the day from the beautiful new Pholarchos Tarot sent to me by its creator, Carmen Sorrenti. I have some reservations about the 10 of Wands in other decks but this 10 of Sparks (her name for the suit) makes me glow with creative fire. I rarely look at assigned meanings for tarot cards since I have known tarot on the inner as well as the outer planes for as long as I can remember. However. since I have just opened this deck I went looking for this sparkplug in Carmen's little book and found this:

10 of Sparks
"The experience is now feverish with detail and story, eyes are open to the lucid dream of it, conscious of the fullness of this manifestation. A fire can burn too high, too wide, too long - take time out, unburden."

I applauded this one-card reading. I had indeed been feverish with detail and story as I read and re-read a hundred books on world mythology, plotting my new online course on "Living Your Mythic Edge",among other things. A little time out could be a good plan.
I like the cat's eyes on this card. In my own tarot deck (created and painted by me for my personal use and trainings I sometimes lead, not for publication) the Court of Wands are all cat people as well as fire people.
To understand Carmen's title for her tarot, you'll need to check out Peter Kingsley's provocative riff on pholarchos as "lord of the lair" in his book In the Dark Places of Wisdom, which landed at my door as suddenly as the new tarot when it was published in 1999. This takes us to a wild and primal level of Greek spiritual experience. A pholarchos, it seems, may have been an ancient Hellenic shaman who goes down into a cave for initiation, connection with the animal powers, and to incubate prophetic and healing nocturnal experiences. The word "pholarchos" appears on inscriptions from just one place: Velia, as the Greeks called a settlement in southern Italy. Carmen tells me she grew up just north of Velia.
Fascinated by all of this, I asked her to share more of her personal story of creating this beautiful tarot and to introduce us in her own way to three of the cards. Here is Carmen's guest blog

I was living in London and Paris as a young actress when I got called to shoot Gangs of New York in Rome. They were going to recreate the old Hell’s Kitchen at Cinecittà studios thanks to the vision of Dante Ferretti and they needed Irish looking mischief makers to be part of Cameron Diaz’s gang of thieves. Sure, I would go—and with that excuse I took a bunch of friends from the film set down to my birth town, Positano. We were only there for 3 nights and in that fire cauldron of a bay where the elements meet without any half measures, I woke shaken by this dream:

“The healer turns into a woman with white hair, light eyes and immense power. I’m blown away by her and spontaneously enter a trance ritual. She speaks to me, firm and lit up. Words to the effect of forgetting what I’m doing with my life and getting ready for a mission. She then vanishes.”

It was to be years before I managed that first part of changing direction, time spent at a luminous crossroads going through a series of deaths and rebirths, before the power women came with more instructions.
By 2014 they were zipping in and out busy as fireflies. It was the year I decided to start work on a deck of cards. It seems simple now but I only got glimpses each time and was confused for great stretches of time. Faith, not patience, kept me afloat. This was the year that I visited the island of Lipsi for the first time. I mention this because Positano and Lipsi are fundamental places that bound me to the vision of this deck.
I was unaware that they shared something in common but the first night in Lipsi I had a remarkable experience with another dream. I could sense my sleeping body on the bed as my dream body moved ever so gently up a spiral staircase so as not to wake that me in the bed. Something so uncanny and so intimate. At the top I found myself on a terrace facing the vast sea. Before I knew it, I opened my arms wide in communion with the divinities of this place.
The next day I noticed that from our tiny island we could almost touch Turkey, or more specifically, Caria. Just as Positano can almost ‘see’ Velia just down the coast… as if both stand guard at the thresholds of the ancient Pholarchos and their liminal existences. That part of Italy was in fact colonized by the Greeks and some of the Pholarchos were amidst the new inhabitants. The caves of Caria came to life again in this new environment.
I felt caught in the web of these majestic figures that spent days incubating healing and prophetic dreams in caves that they would then take back to their communities. This is, of course, if the term pholarchos means what we think it does. In any case, symbolically the story holds weight for me. As a child I was terrified of the immensity of dreaming—this window that takes us all the way to the infinite or as the Tibetans would say, the clear light—traveling through every terrain the soul can or cannot handle along the way.
Another of these power women in 2014 was from Positano itself and she worked in her own underground lab (or cave) as well as being the daughter of a place called the ‘Buca di Bacco’, a famous restaurant many will recognize but, more importantly: ‘the den of Bacchus’, Lord of ecstatic communion and wild surrender. What will we do to cover up our vital force and then what will we do to try to reclaim it? I’m hoping such a deck of dream healers can inspire those who come across it to walk into those personal caves of limitless potential where dreams and visions lead the way through the labyrinth.
The thing is, dreams are phenomenal because they do slowly guide our way home, to the central kingdom, if we just allow. And no matter how often we lose faith, they are always ready to flood us with renewal.
My mother had no idea I would make a deck of dreamers. They did all have big dreams for me in town, but of another sort. It does greatly amuse her however that she had my birth predicted by a tarot reader who gave her advice on how to overcome a near death experience of the fetus in her growing belly. I tend to steer away from predictions myself but sure enough she hemorrhaged hard enough for the doctor to say I had died… my mother remembered Pina (who in secret was doing readings for top Italian politicians as once astrologers had done for popes despite the decrees against such practices) and followed her instructions to safety.


The deck has the traditional structure of 78 cards and can be used in conjunction with other books on tarot if you should want to do so. Here is a flavor of a magical trio of cards: Lovers, Tower and Queen of Sparks, posted along with their fragments of dreaming. It is for you to ride the waves with them and see where they land you. May you travel safely, feeling your own deep and numinous pulse. 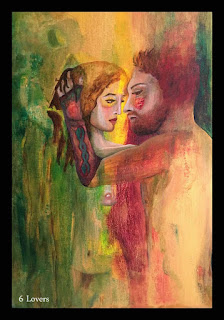 Venus drops her precious stones in your blood stream and Vulcan nimbly makes jewels of them. You plunge and surge onto a shore of deep belonging. Now you are vast, the waters of love dissolve your mold yet passion is always glistening inside you, setting a course for life, not only now. Within the fiery dragon of the heart is the lookout point. Keep the taste on your tongue and rather than burn right through, seek an underlying design. This is you unfolding. 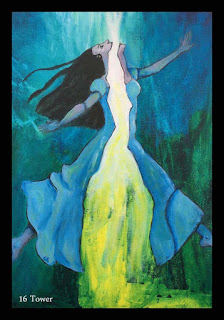 The elemental forces all rush through you. Will it be a trial by fire, water, air, earth or all of the above? Lightning strikes and splits your soul into a thousand colors. This is an awakening. Every particle gets charged and when you knit yourself back together, the transmissions work differently; you may need to learn a new language that bonds you with the world. Here is the complete annihilation, the revisioning, a new incarnation in your old body. The ancients called this the “House of God”—are we ever prepared for such a meeting? 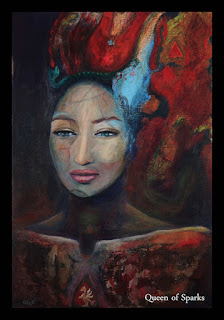 A huge parade with thousands of people. She places her feet firmly on hot coals, clear that intent is as important as action. She sits on the throne and fingers the fulgid wee dragon that lives in her heart chamber till they both cast the velvet green of their eyes upon you. Your turn to unleash enchantment, the crazy magnetism of creativity.

Wonderful! I am so glad to know about this Tarot artist and hervisionary approach to rethinking the traditional deck. I pre-ordered a deck and put in a side vibe to win that journal!

Absolutely mesmerizing, the creation of this deck, the synergy of you two and how it is reaching out into the world beyond. Exquisite writers, dreamers, Alchemists...you are leading the way. Merci beaucoup!

The Shining is a horror novel by American author Stephen King. Published in 1977, it is King’s third published novel and first hardback bestseller: the success of the book firmly established King as a preeminent author in the horror genre. Read Moree stephen king the shining movie