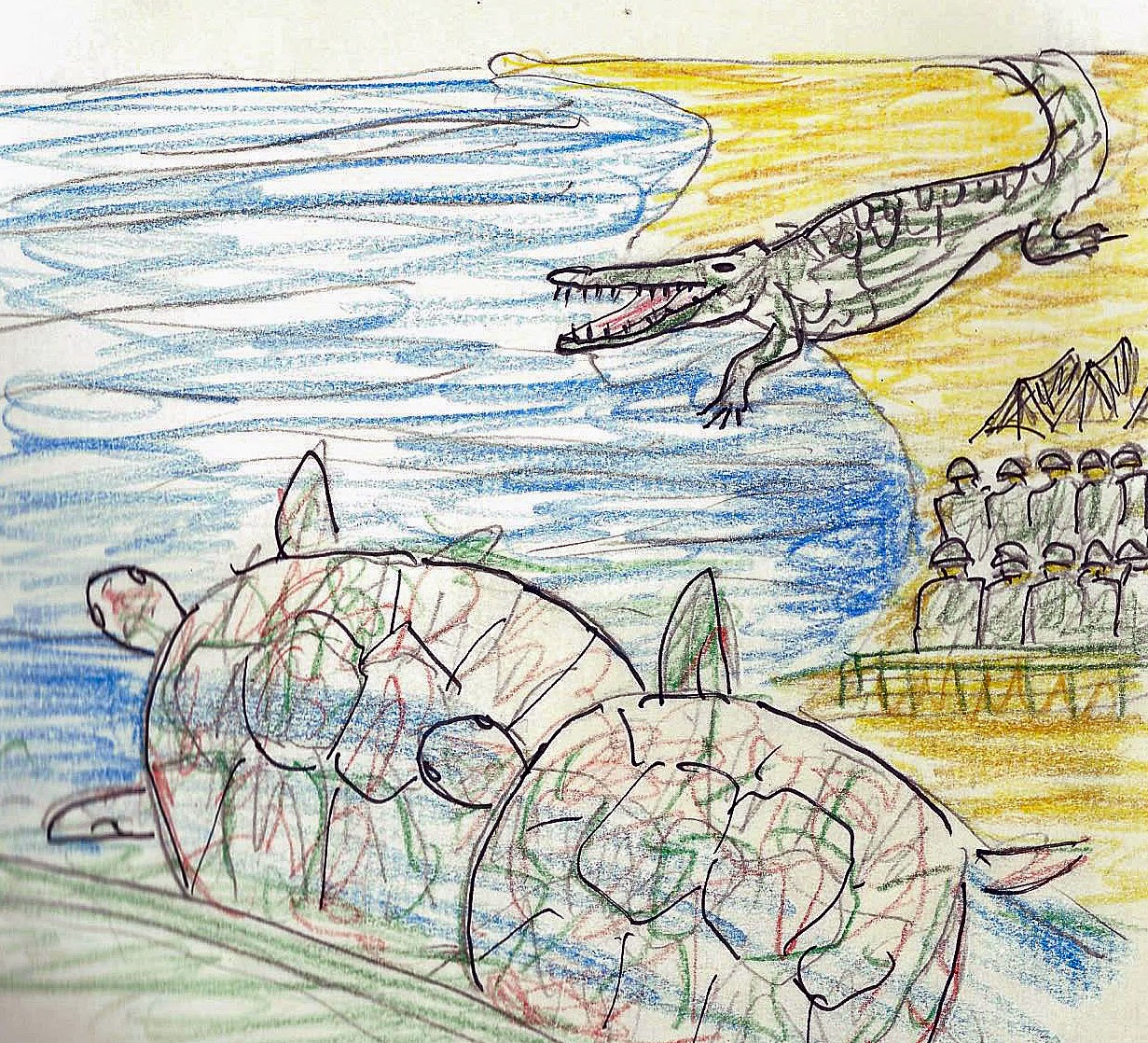 There is a commotion outside. I go to the window and see an army is encamped along the edge of a body of water where a battle is taking place between a giant turtle (the size of a dozen men) and a giant crocodile. I call to the others to come and see. When I turn back, I see that the army has saved the turtle, which is being transported to safer waters. They have constructed or opened a kind of raceway and the turtle is swimming between walls. Now I see that there are actually two giant turtles.
I look out to the water again. Beyond military lines, the crocodile stands on a headland, tail raised like a scorpion, apparently triumphant for now. I understand that the conflict will be resumed. It's part of life. The role of the army is to ensure that neither party destroys the other.

I woke from this first dream of the night feeling both excited and satisfied. In the dream, I was an observer. I felt that I was being shown something of huge importance in life.
I know both Turtle and Crocodile as members of my personal mythic bestiary. I have swum with sea turtles and I am from a country famous for crocodiles. I know that in life there are contests between opposing forces and attitudes that must continue if life itself is to go on.
Instead of spending much time in self-analysis of the dream, I made a quick drawing and decided to ask Jung for a second opinion. Who better? I had already had it in mind to do my daily bibliomancy with Jung’s Memories, Dreams, Reflections, a book of seminal importance in my life and the most personal and accessible of his works. However, when I reached into the Jung section in a glass-fronted bookcase in my personal library, the shelf elves had other ideas. Another volume in Jung’s Collected Works came flying off the shelf, striking me lightly on the chest.
Naturally, I changed my ideas about where to look for guidance and took this flying book to my desk. Its title is Two Essays on Analytical Psychology which seemed to match the revelation of the two turtles in my dream rather nicely. The volume is a dual edition of two of his early essays, Volume VII in the Collected Works. I opened the book at random and read this:

"There is no energy unless there is a tension of opposites; hence it is necessary to discover the opposite to the attitude of the conscious mind...Repressed content must be made conscious so as to produce a tension of opposites, without which no forward movement is possible…Just as high always longs for low and hot for cold, so all consciousness, perhaps without being aware of it, seeks its unconscious opposite, lacking which it is doomed to stagnation, congestion and ossification. Life is born only of the spark of opposites."

I saw that there was no need to invent a snapper to carry the essence of my dream. Jung had given me one. Life is born only of the spark of opposites.


This little incident from this dreamer’s life is a practical example of how we can turn to a book to give us a second opinion on a dream. Our curiosity may of course take us far beyond the initial passage we find when we open a book at random. I found myself drawn, irresistibly, to-read both the essays in that volume of Jung, in which we find his mind devising and developing theories of aspect psychology, the shadow and the relations between the ego-self and the collective unconscious which were to become fundamental to his approach.

Drawing by RM
Posted by Robert Moss at 9:49 PM

I understand that life would cease to exist without opposing forces and ongoing interplay between them but I don´t know if fighting is necessary for continuation of life. Turtles and crocodiles are expressions of very archaic energy but on the level of human heart we might integrate opposite forces.
I remember a beautiful Indian story about the time when people lost connection with nature and fire which was supposed to burn in all men´s hearts was slowly dying down. People were very cold, frustrated and all the time fighting each other. But there also lived a brother and a sister who decided to go to the elder for advice. He told them about the burning heart in a cave and how difficult it was to come there. Many people set out for a journey but nobody succeded. They always wandered alone.
After enduring a lot of hardship, siblings arrived at the cave and at first the brother wanted to take some embers, however, they burnt him. Then his sister went with the same luck. In that moment they almost gave up but then remembered to do things together. They stretched their hands together and the fire didn´t hurt them. They could bring embers to the elder who showed them to the community and the fire started to glow again in human hearts.
Opposites will always exist but maybe by listening to our deepest hearts we can find the way to use them for good.

If this was my dream I would be happy to once again be the watcher.
I find in those dreams when I am not actively participating I tend to get a good lesson. I usually will wake up with a one liner that makes it clearer or find one during that day.
Thanks for the reminder of the opposites and how they are being monitored for safety.