The Lion Who Fell from the Moon 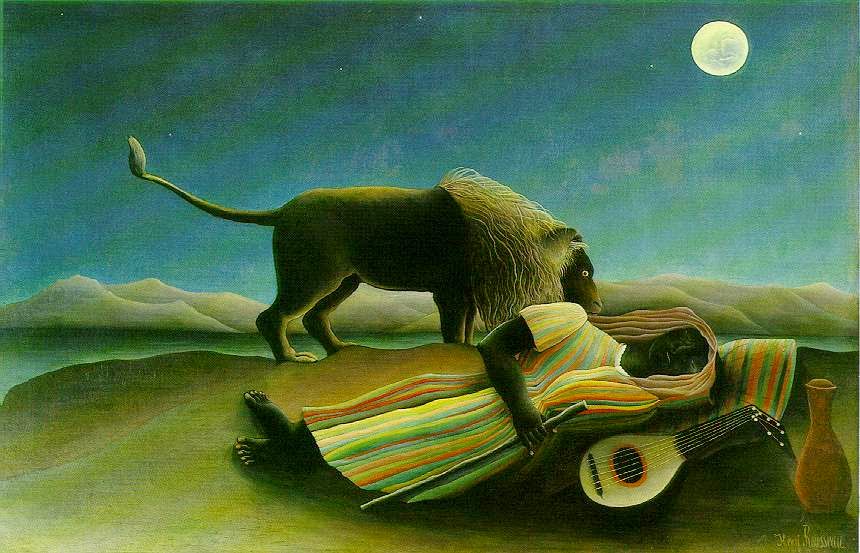 My chills of recognition make me pause, just three lines into the story. Borges named this one after himself: “The Maker”, El Hacedor. Previous translators squirmed at the title “The Maker”. They thought people might confuse it with Our Maker; they feared leaving sulphurous traces of a heresiarch. So they considered and sometimes used “The Poet”, “The Artificer”, “Il Fabbro”. But Borges chose the English himself. And yes, he meant maker of worlds.
The maker wrote this as he was nearing blindness in the vast library in Buenos Aires whose flying books had made love and married and danced the tango and fought with knives inside his mind. I can think of no one, not even Jung, who has housed so many books in his head and incited so much action between them. Borges was now engaged in constructing a total library in the imaginal realm, his version of paradise. Never a tame library, but one where wild things are.


I am seized again with wild familiarity, the hot breath at my neck, claws at my kidneys.
Borges’ line has a rhyming cousin, short, stocky and flat-faced, wearing a robe of skins hung with bronze mirrors. I know where to find it.  I keep it locked behind glass doors, along with the Red Book, The Golden Bough and other books that like to flap about and  prowl in the night.
Sometimes the doors rattle and the key turns unassisted but today, things are quiet and I must fetch the book myself. It was published in Oxford five years after Borges died, so he could not have known it but might have known some of its sources. Its words are spun from conversations with shamans and elders of the Daur Mongols, lovers of horses, fermented mare’s milk, and drums that they ride to other worlds.
Like Borges, these shamans are forever talking about tigers and lions. While Borges tried to make dreamtigers and was never quite satisfied, around Hailar or the Nomin River it’s not hard. Lie by the water watching butterflies and a tiger twice as long as you may come for you, as it would come for a tethered goat.
Out here the lion may demand a deeper seeing, since you won’t see lions in Daur country with your ordinary eyes.
The Oxford anthropologist asks a Daur shaman, Urgunge Onon, about this. He speaks from the tellings, which is how his people describe their traditional knowledge. Anthropologists may know about shamanism but the people who practice it in the old ways don’t have any “isms” in their vocabulary.
Urgunge says, “Wild animals of the forest have two kings [khan], the tiger [tasaga] and the lion [arsalang].
“Lion?” The anthropologist is amazed. “But you don’t have lions in Manchuria.”
“They will be thinking of …er..what is it in English? Leopard. Leopard is just like lion, is that right?”
“But you don’t have leopards either.”
“No, that is true. So the conclusion is: in reality the khan of animals is the tiger; in imagination the khan is also the lion, even if we do not have lions in Mongolia. Everybody knows the story of the lion who jumped to catch the moon, then it died, you see. This is definitely the lion. The tiger never did that.”
The lion who fell from the moon did not really die, of course. Borges knows that. So does Henri Rousseau, called the Customs Man.
Some nights, coming in or out of sleep, I feel him lying with me on the bed, back to back.

Dreams are created out of time,
Mixing past and future,
In a present that is not present.