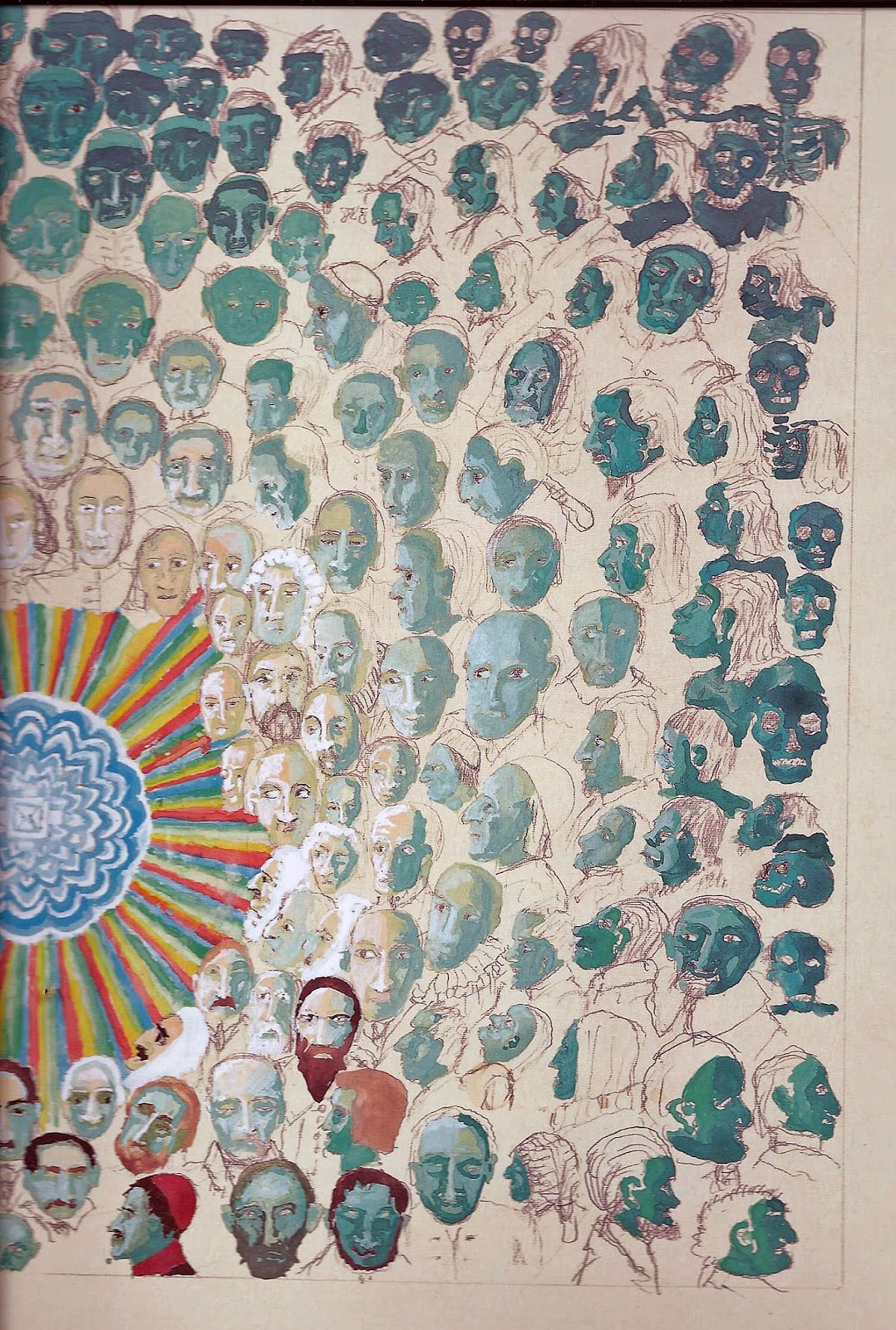 If you choose to venture into Jung's Red Book, I strongly advise you to do so more cautiously than I did. I stayed with it for three days and nights, without much sleep, following Jung on his Underworld journey. There was one moment, in particular, when I became very angry with him.
He recounts a vision in which he comes upon the mutilated corpse of a murdered girl, and this fills him with grief and rage. A veiled woman appears and tells him he must remove the child's liver and eat part of it, to atone for the crime. He must take on the guilt, because he is a man and a man was responsible. Jung writhes in resistance, disgusted and horrified, but finally complies.

I kneel down on the stone, cut off a piece of the liver and put it in my mouth.My gorge rises - tears burst from my eyes - cold sweat covers my brow - dull sweet taste of blood - I swallow with desperate efforts - it is impossible - once again and once again - I almost faint - it is done. The horror has been accomplished. [1]

I wanted to throw the book across the room, but stopped myself, reflecting that this tombstone of a tome would break the furniture. I read on. The woman who commanded this cannibal act throws back her veil, revealing a lovely face, and tells Jung, "I am your soul."
You will need a strong stomach for some of this. And you will need to be ready to accompany Jung, quite literally, in and out of the madhouse. But persistence will be rewarded. The Red Book, never intended for public consumption, is essential and fascinating reading for those who want to understand the price Jung paid for his gifts. He went down into private hells and depths of madness and he got himself out. We see him struggling heroically to find a vocabulary and a model of understanding for his experiences, weaving for himself the ladders of words that will help to get him out of the pit. We see the seething cauldron from which his greatest work would eventually emerge.
Jung culled the material for the Red Book - whose fine calligraphy and vivid illustrations and decorative features make it resemble a medieval illuminated manuscript - from the journals ('black books") he kept during the years of his "confrontation with the unconscious", when he walked the razor's edge between madness and genius. As he describes it, the "spirit of the depths" ripped him out of the comfortable, rational assumptions of the "spirit of our times" and dragged him, night after night, through the terrifying stages of Underworld initiation.
-    In a crater in a dark and terrifying world below, where black snakes threaten to destroy a red sun, he meets the prophet Elijah and his "daughter" Salome, the evil beauty responsible for the decapitation of John the Baptist in the Bible. Salome tells Jung - to his amazement and confusion- that they are brother and sister, the children of Mother Mary. Disbelieving and fearing for his sanity, Jung yells at her that she and the Elijah figure are only "symbols". Elijah reproves him, saying, "We are just as real as your fellow men. You solve nothing by calling us symbols." Jung's Elijah also instructs him that "your thoughts are just as much outside your self as trees or animals are outside the body." [2]
-   While he is trying to continue to lead a normal life, as a prominent psychoanalyst and the father of five children. Jung's sense of reality is being shaken by the raw power of his night visions, and by synchronistic phenomona during his days when he feels the forces of a deeper world pushing through. In December 1913, in a well-cut suit, he gives a polished lecture to the Zurich Psychoanalytical Society. Three nights later, he tells Elijah, "It seems to me as if I were more real here" - in the Underworld - "yet I do not like to be here." [3]
As Jung confessed, anyone reading the last chapters of Liber Primus, the first part of the Red Book, out of context might conclude that the author was crazy. Brilliant and erudite, but crazy. Yet from such perilous adventures out there beyond the roped-in precinct of sanity, Jung derived his ideas about "psychological objectivity", one of the most stimulating elements in his later work. From his dialogues with his dream characters and his efforts to integrate and balance the powers that moved with them he developed his practice of active imagination.
Jung told the Dutch artist Roland Horst that he developed his work Psychological Types from 30 pages of his Red Book [4], apparently the pages in which the encounters with Elijah and Salome take place and in which - after Jung has been squeezed by a giant black snake until the blood gushes out of him and his head has become that of a lion - Salome tells him, "You are Christ". [5]

-   Looking back on this passage in his inner and transpersonal life in 1925, from across the divide of the catastrophic Great War that some of his visions had foreshadowed, Jung told a seminar that "You cannot get conscious of these unconscious facts without giving yourself to them. If you can overcome your fear of the unconscious and can let yourself go down, then these facts take on a life of their own. You can be gripped by these ideas so much that you really go mad, or nearly so. These images...form part of the ancient mysteries; in fact, it is such fantasies that made the mysteries." [6]
"I fell into the mystery," Jung states after he has been squeezed by the black snake and saluted by Salome [7]. Reading the Red Book, we see the enormity of the price Jung paid for his wisdom, and come to appreciate the extent of his courage and eventual self-mastery. This is a record of a thoroughly shamanic descent to the Underworld, and of long testing and initiation in houses of darkness from which lesser minds and feebler spirits might never have managed to find their way back.

Many Selves. Drawing by Jung on page 169 of the facsimile of the Red Book.
Posted by Robert Moss at 3:17 AM

The story I am just reading is closely related and not related at all to Jung´s horrid dream experience eating girl´s entrails as a penitence for someone else´s crime.
The account comes from Thich Nhat´s book No Death, No Fear and it´s about an American veteran from Vietnam. Partisans killed his friends and he was determined to take revenge on people from the village in which his friends had died. He made sandwiches with explosives and left them on the edge of the village. Children found sandwiches, ate them and died in great pain. When parents arrived, it was too late because neither ambulances nor medicine were at hand.
The man returned home but he couldn´t overcome his guilt and suffered greatly. He turned up at the retreat which Thich Nhat organized in America for war veterans. He taught them how to walk and breathe to transform feelings of fear, guilt and suffering. He told the former soldier: "You killed five kids, that´s true, but now you can save lives of hundreds children who die without food or medicine. You can bring food to some of them. The veteran started to do it and "he was at once reborn in the past as someone who saved lives of twenty children".
Of course, Jung wasn´t guilty, but in the real life who can state with the final authority who the victim is and who the main culprit is. In the story above children, killed soldiers, the old veteran – all are pitiful. But if we hadn´t known the whole story, we might have thought differently. So maybe is not only the matter of guilty or not guilty but also the matter of healing the whole mankind by accepting that in the chain of evolution we could find ourselves in the skin of a desperate soldier or hungry children.
I dont´know but I guess that Jung by digesting that horrible crime as his own initiated himself to become one of the greatest healer of human souls.