On "bad" dreams and trash dreams 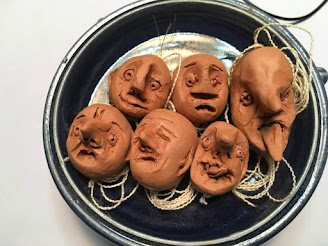 I've often said that dreams - including scary dreams and nightmares - are not on our case but on our side, in the sense that they show us things we need to see and to deal with.
However, I am not of the opinion that all night experiences come in the service of health and wholeness, except in the sense that we can regard anything that comes up in life as a possible learning experience.
Every ancient and indigenous culture that I know teaches that there are bad things that can try to enter our space in the night, and bad neighborhoods in the dreamworld in which we can get mugged. Hence the dreamcatcher, originally a spider web, intended to catch and keep out bad dreams and bugs, and other apotropaic rituals and procedures, including prayer to divine guardians. Hence traditional rituals for dispersing the energy of a bad dream right away.
The ancient Assyrians sought to remove the contamination of bad dreams by rubbing the body with a lump of earth that was believed to absorb the unwanted energy. The lump would then be destroyed, preferably by breaking it up and scattering it over running water, so the river would dissolve it and carry it away. In the Assyrian Dream Book, we read that someone who experienced a "dark" dream should pray and then

He shall take a lump of earth, he shall recite three times the conjuration over it, he shall throw it into water. His misfortune will depart. [1]

The Egyptians employed similar rituals for cleansing the dreamer of from the pollution of an evil dream. In the Chester Beatty papyrus, this involved (1) telling the dream to the Great Mother - here the goddess Isis - and invoking her help and protection and (2) rubbing the face and body with bread soaked in beer and infused with myrrh and herbs. This bread-sponge was believed to be highly effective for psychic cleansing. The ingredients may seem odd, until we remember that in the ancient mind, bread and beer are both the gift of the Goddess. In the Gardiner translation,  says: “Come out with what you have seen, in order that the afflictions you saw in your dreams may vanish.” The ritual ends with a triumphal cry from the dreamer that he has dispelled an evil dream sent against him and is now ready to receive pleasant dreams. “Hail to thee, good dream that is seen by night or day!” [2]
Some traditional dreaming cultures teach that it is not a good idea to share a certain type of bad dream with others, because you don't want to dwell on it and feed it with the energy of your attention, or risk spreading psychic infection. In West Africa, a traditional practice to avert the evil of a dark dream is to spit it out right away, within telling anyone about it. In Bali, in Anatolia, and in other places, there are traditional practices that involve telling - and sometimes expectorating - "bad" dreams into running water.
Then there are dreams that are not necessarily "bad" but don't deserve attention because they are trash left over from the night before. Hawaiians have a marvelous term for trash dreams. They call them "wild goatfish dreams". Goatfish is something Hawaiians like to eat, in the right way, in the right season. But a "wild goatfish dream" - like a spicy pizza dream - is occasioned by eating the wrong way at the wrong time, and is not to be valued, but rather thrown away among the leavings of the previous night.
As everyday practice, I would counsel anyone who feels oppressed by a bad dream to spit it out. I do mean literally. Spit it out on the ground or down the toilet. If you feel that's not enough, draw the dream image and burn it. Then think carefully about whether you really need to spend more time with that troubling night experience, and whether it is really necessary to inflict it on others. I am reminded that it was the wisdom of some Irish grandmothers, on both sides of the big pond, that you should not tell your dreams before breakfast unless you want them to come true. 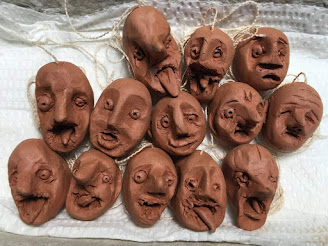 1. A. Leo Oppenheim, The Interpretation of Dreams in the Ancient Near East (Philadelphia: American Philosophical Society, 1956) p.301
2. A.H. Gardiner, Hieratic Papyri in the British Museum. Third Series. Chester Beatty Papyrus. : , 1935, in Oppenheim, op.cit., p.244.
Photos: Clay effigies of "bad" dreams, destined for release in flowing water, made by Xander Cloudwalker for a contemporary version of the ancient Mesopotamian apotropaic ritual.
Posted by Robert Moss at 7:30 AM

Thank you for the reminder to be vigilant with the quality of our dreams.