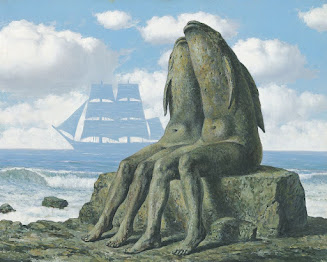 I am rarely surprised when I hear accounts of telepathy between people who are closely connected. We sense each other's feelings (telepathy literally means "feeling at a distance'); we feel a tug in the head an know someone is calling us; we pick up sounds and smells and images relating to the other person's activities. When living across an ocean from me, one of my daughters always knew when I was cooking my fiery version of Hungarian goulash, which she detested. "Ugh, I know you were cooking that yukky stuff again." I would know when she was thinking about me, across all the miles,  because I wold smell a little girl cologne she had bought in a general store.
Dream telepathy is very interesting because it extends beyond picking up elements of what is going on in another person's mind or life. We may actually find that we are meeting each other in a dream space and sharing adventures. This happens spontaneously. It can also be done by setting a dream date, with a rendezvous place.
I once agreed with a group of active dreamers who were on a residential retreat with me that we would seek to meet at the Jean Talon market in Montreal overnight. We agreed to meet at a cheese counter. Only one person in that group, a French Canadian, knew the market. He was later able to confirm details of our travel reports. It seemed we had not only shared some good times; we had been to a version of the market very close to the physical one. I found that all my senses were engaged, I came back with the taste of a perfect brie and a pungent roquefort on my palate.
When dream telepathy extends to full-fledged interaction between two or more people, we may want t call it shared or mutual dreaming.
A variant on this theme I find fascinating is what I have decided to call symbol migration. A symbol that is alive in your mine can exert powerful magnetism. It may help to generate effects in the world around you which you may notice in the play of synchronicity. It may also exert a reach that brings it into the minds of other people, whether or not this is any part of your intention An image you are thinking about and visualizing in your waking reality may enter the mind of someone connected to you in a dream.
Jung gave us a wonderful example of symbol magnetism in his tale of repeating fish. I want to share a personal experience of symbol migration that also has significant fishy content.
I often read deep in the night, when some of my best research is done and my best 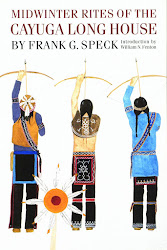 discoveries are made. Over a weekend at a mountain lodge where we were doing deep shamanic work with the spirits of the land, my middle-of--the-night reading included a book by one of the great ethnographers of Northeast, Frank G. Speck, titled Midwinter Rites of the Cayuga Longhouse, based on his fieldwork among the Six Nations in the 1930s.
I was struck by the following elements in his account:

1. Fever Mask. Speck includes a photo of a "Fever Mask" for catching and controlling a fever spirit, and writes about how Indians can handle red-hot coals in an altered state.

2. Dreams of Angry Fish. He discusses s regarded as "persecution by animals". According to his native informants, animals that have suffered from humans and want redress may haunt those who killed or tormented them in dreams. Speck listened to a number of disturbing  a troubling about fish, the first thing people should do for you is to splash water on you to reassure the fish that you will honor their element.

3. Whirlwind Mask. In the book Speck discusses the Iroquois belief that disease as well as mayhem are carried by Whirlwind Mask, and has photos of a mask representing the Whirlwind spirit that only a powerful shaman can wear. I was stirred by the idea that the greatest healer in this tradition may be one who can take on and contain the forces of chaos and disease and transmute them within their own being.

The next morning, I was excited to discover that key elements from my reading appeared to have slipped into dreams of our group through symbol migration.

The first people to share s with me at the breakkfast table reported the following:

1. Fever dreams."I ed of a a man whose skin was on fire." (Later a second er reported, "I ed my husband had a fever")

2. Dream of angry fish. "I ed that the fish were mad at me. They stripped me to the bones, like a filleted fish. Them men wrapped me in skins and took me out into the water to grow me a new body."

3. Dream of Whirlwind Mask. "I ed I should make a mask of the Whirlwind and then put it into the fire to contain that power." This er, an artist, had already constructed an amazing whirlwind mask, using birch bark fallen from trees in the woods around us.

We are porous to the thoughts and feelings of those connected with us. Within a loving and supportive community,this offers seeds for growth and healing and deepening understanding. It may also remind us to check our boundaries and may sure we are not open to the migration of unwanted images or preoccupations. In my groups we always take care to set up effective psychic screens and shields,not least by invoking the Gatekeeper, that entity that opens and closes our roads between the worlds.

I have been wanting to do dream telepathy with someone I miss of late. Heck if I know what to do, other than sending my intentions out into the universe. I am extremely weak at dreaming and don't have psychic ones, so I doubt I'm going to manage it (and if I did it would be very weird of me to ask!). Sigh. I just wish these days.

I recently had a really cool dream experience. I was reading, "The Boy Who Died and Came Back" and woke up from a dream in the morning that consisted of me getting attacked gentally by leopard and was thinking this could be a dream of a spirit animal with a message. Later that day I was visiting a friend and their young child came over to play with me. I decided to ask the young child what they had dreamt that night and he proceeded to giggle and tell me that he was dreaming of a tiger coming after him. I thought it was cool that me and him both had dreamt of wild cats that morning. Made me wonder if we linked up telepathically and had a shared dream.