Night Journey and Ascension with Gabriel 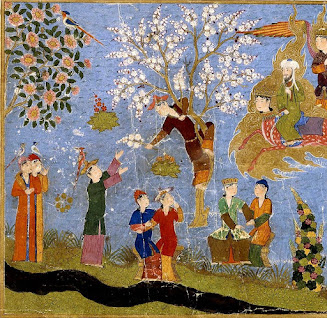 I have been re-rereading an excellent scholarly study of early accounts of Muhammad's "night journey" under the aegis of Gabriel (Jibril in Arabic), the angelic patron of dreams and astral travel. These "primitive" narratives, like the ascension discourse of Ibn ‘Abbas, are sometimes wildly different from Islamic orthodox teachings. The first angel the Prophet encounters in Ibn ‘Abbas’ narrative is a Rooster Angel (no kidding) - a giant with emerald green and blazing white feathers whose wings spread as far as the eye can see. Its function is to wake everyone up on Earth below.
Then the Prophet meets an angel who is half fire and half snow, split down the middle. Somehow the fire does not melt the snow and the snow does not put out the fire. Next the traveler meets the Angel of Death, who is studying a kind of cosmic laptop on which everyone's expiration date is inscribed - with the whole Earth between his knees, so none can escape him. He now encounters the Angel of the Hell Gates.
The Prophet's ride is the Buraq, a mystical steed with a beautiful human face.
There are angels all the way up, through seven heavens. They get bigger and bigger. Higher up they stand in rows, with a distance of “50,000 years” of normal travel between each row,
Muhammad is terrified by cherubim whose bodies are full of faces, and by seas of fire and wild water. These are the “veils” of God. Gabriel gives "firmness" to Muhammad’s vision, at last leaving him to trade in the Buraq and fly up in a strange green vehicle called a rafraf (for which there is no translation). It’s been suggested that it is a flying carpet. It dips and rises like a bucket seat on a tilt-a-whirl and will interest aficionados of UFOs.
Muhammad leaves Gabriel behind to whizz up for a face-to-face with God (an idea frowned upon by orthodox imams). God "inclines' himself until he is the distance of "two bows", then reaches between Muhammad’s shoulder blades until the Prophet feels a cold hand closing around his heart, that delivers him from fear.
Recurringly, Muhammad falls into a swoon, from which he emerges to tour the numberless palaces of Paradise as far as the Lote Tree of the Boundary, also known as a sidr tree. He then makes his homeward journey, stopping to greet the earlier Prophets in the lower heaven (Jesus in the lowest, the First Heaven).
The authenticity of the narrative, attributed to Ibn Abbas, a contemporary of the Prophet (he was 13 when Muhammad died) revered as the "Interpreter of the Koran" and the "Great Sea of Wisdom" is contested. Yet the scholars concur that this version of the isra (night journey) and mir'aj (ascension) is very early, and gives us some insight into the type of visionary experience - embarrassing to organized churchmen - that is the fundament of religions..
Pseudo-Dionysius the Areopagite, who melded Christian faith with neoplatonist philosophy, gave us in his fifth-century Celestial Hierarchy tiers upon tiers of angels, from seraphim and cherubim closest to God down to archangels and angels nearest to earth and humans.  Ibn 'Abbas has angels in myriads, ordered in rows seventy rows deep, separated on their various levels by those 50,000 years of distance which the Messenger of God is enabled to cross in an hour. When the Prophet returns to his body he finds that the jug of water overturned by the hoof of the Buraq when they took off has not finished spilling. With the help of the archangel of dreams, he has visited heavens and hells and traveled to the outermost limit of what it is possible for a human to see and know, in less than the time it takes to empty a jug of water.

Art: Mounted on the Buraq,watched over by Gabriel, the Prophet visits the paradise of ḥūrīs Illustration from the Mi‘rājnāma (Book of Ascension) from the Timurid period in Persia, c.1436. In the Bibliothèque nationale de France