The Cinema of Lost Dreams 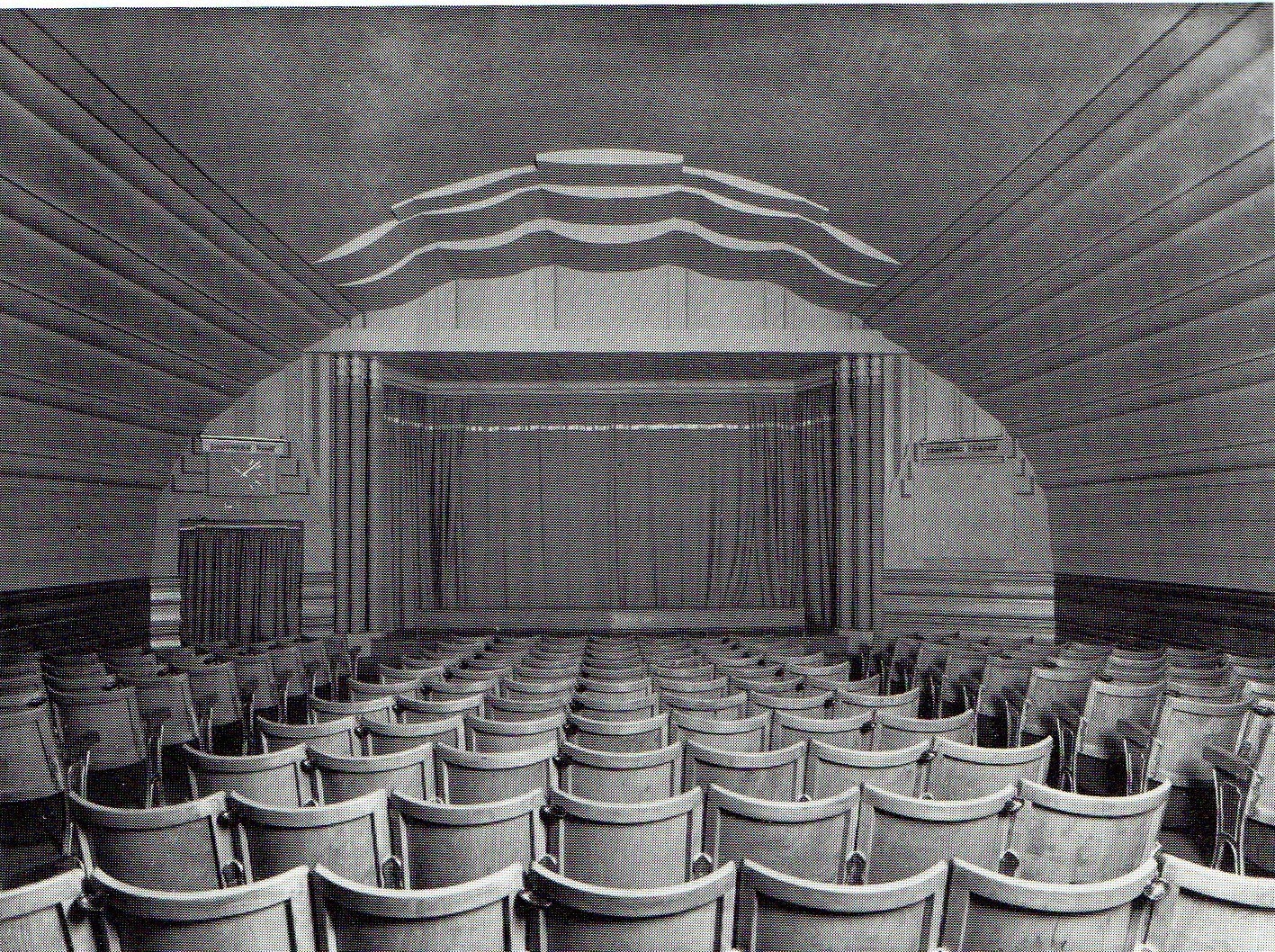 What happens to the dreams we don't remember? I've asked myself that question on several mornings, when I've awoken with little or no dream recall, while feeling that the night had been active.
On one such morning, I decided to linger in bed and see whether I could find a place where I could recover lost dreams. I found myself approaching an old-time cinema, that reminded me of a movie theater where I used to go, as a boy, to watch Saturday matinees. I was amazed and delighted to find that, this time, the movie titles on the marquee and the images on the posters in the lobby all throbbed with significance in my present life.
Waking the Sleeping King was blazoned in lights.
One of the posters showed a boy riding a monster of the deep through a stormy ocean. Another depicted a steamy romance.
The girl at the ticket kiosk smiled and gestured for me to go through. Soon I was settled in a comfy padded velvet seat in a private screening room. As dream images filled the screen, I realized I had a choice. I could remain a comfortable observer, or I could enter the fray.
On another morning, after coffee, I decided to try the same method again. This time, instead of going back to the movie house, I found myself drawn to the kind of video store that is almost defunct, thanks to our new instant delivery systems. This video store was vast, with its products arranged on many levels, On the first floor, dreams were arranged like DVDs on shelves, according to familiar categories - Drama, Comedy, Family, and so on, There was a large Adult section most of whose content was quite unfamiliar to me. I realized that a block had been placed on some of this material, so that it did not reach my conscious mind, or - in cases where the film had been rated I (for Intrusion) was not allowed through during the night.
I discovered sections devoted to my dreams of individual people. I had only to focus on a name or title,and the movie began to play all around me, so I could enter it at will.
On a lower level of the dream video store, I discovered that I could explore dream adventures I may have shared with other people, but had not remembered. I found an immense archive of shared dreams involving each of these people. One was as large as a Gothic cathedral, with shelves rising to the high roof many stories above.
I watched several dream movies in each location.They took me deeply and vividly into scenes of other lives and other times - of leopard people in Africa, of Celtic voyagers in a coracle on a cold northern sea, of a turning castle in a high desert landscape where everything is the color of sand except for the pretty star-shaped flowers, blue and purple, on a terrace. The dream movies revealed a hidden order of connection in all these relationships, transcending our present lives.
On yet another day, when I felt impelled to go searching for lost dreams, I was drawn to a building like an old-fashioned post office. It resembled the post office in the rust-belt city of Troy, New York, where I once lived. When I arrived in front of it, in my conscious dream, the sky turned dark. I mounted the high steps, and walked past the mail boxes towards the counters. Most of the steel shutters were down and locked for the night, but one was still half-open. Behind it, I saw letters spilling from pigeon holes and heaps of giant mail bags and packages. A little black women in  a blue uniform hurried to the desk and handed me a letter. I was moved to tears when I opened it and found a message from a beloved family member, long deceased.
When I turned to thank the postal clerk, I realized that I knew her. I had glimpsed her, in half-forgotten dreams, slipping mail through a letter drop in the door of my house, a letter drop that is not in the physical door. She strongly resembles a figure from history I was called to study by dreams I did remember - Harriet Tubman, a world-class dreamer who used her visions as maps to guide escaping slaves to freedom on the Underground Railroad before the American Civil War.
I suspect there are back rooms in my dream post office where there is more to discover. Maybe one of them is like the Cabinet Noir in the old French post offices, where mail judged suspect by the authorities was held for inspection, and often never delivered to the addressee.
All of which leads to this suggestion: if you are missing your dreams (and your dreams are missing you) try taking a little quiet time, when you won't be disturbed, and announce this as your intention:

Maybe this will take you to a movie theater, a video store, or a post office, or another place entirely, constructed from your own life memories and suited to your imagination. In whatever form it appears, you will be entering the Cinema of Lost Dreams.

Perhaps you are aware that the screenshot of Georges Méliès Le Voyage dans la lune Quite is quite an ironic image choice for this post on lost dreams.

Méliès was a well educated, son of a shoe maker (sole/soul) who worked in the family business before setting out as a stage performer and illusionist. He was a prolific filmmaker, directing 531 films in 17 years and was responsible for many special effects innovations in the formative years of film. Yet only slightly more than 200 films have survived.

Many original prints of his works were confiscated by the French during WWI and burned for their celuloid and silver content - ironically the army used the raw materials for boot heels.

And in 1923, frustrated with the business of film, poverty and bad fortune, he burned all the negatives as well as most of the costumes and sets that had been stored in the Montreuil studio.

The Scorsese film HUGO is a fantastical tribute to this film magician.

Further synchronicity re: your previous post LETTING THE WORLD GIVE YOU A DREAM - Wikipedia attributes this quote to Méliès, "Laugh, my friends. Laugh with me, laugh for me, because I dream your dreams." (quote from Myrent, Glenn & Langlois, Georges P.. Henri Langlois: First Citizen of Cinema. Twayne Publishers. 1986. p. 40 - 41)

This post and this comment have been totally synchronous to me. I read this comment and then a few nights later my boyfriend found the movie Hugo on netflix. It did not even register that I had just read about it here! It was a great movie. And I also had a dream that I was seeing my lost dreams on my Google Reader app on my phone. I dreamt this twice. I love this quote that nance gives at the end here, "Laugh my friends. Laugh with me, laugh for me, because I dream your dreams."

Yesterday I flipped through a copy of this most delightful piece of art/writing which ended up being detailed storyboards for many of the scenes in the movie. As a former animator/cartoonist this delights me and has inspired me to pick up my pencil again.

I don't know where this will lead but Thanks

Reading this beautiful article, I've seen, or imagined the sights as if they were real and made so many associations of my own. Cinemas like you describe I've only seen in movies, ironically. Here in Bucharest, the small cinemas don't have this kind of natural mystique. The ons left are obsolete, sunk under the pressure of grand mall theatres. I remembered one movie I love in particular, Cinema Paradiso, that is how I imagined the cinema from your dream. Then, the video store, reminded me of another movie, especially the part of the adult section. Love, sex and videotapes, which, despite the title, I found very delicate in depicting the frailty of our human nature.

Then, finally, the post office and the black cabinet, took me back to one of my pillow scenes, a night dream in which I was in Paris, in an old post office much like the one you described. My mother was there, she had a package to collect. I offered her a new scarf that she tried on by a large mirror while standing in line. It was silk and bright green and it really changed her appearance, she looked lovely, it matched her blond hair. :) Then, I noticed how old and obsolete the surrounding looked. Especially a back room, that looked like a bathroom with tiles and a sink. The door was open, I picked in over the counter. It looked old, lie the building itself, old tiles, old door, old furniture...

Anyway, the package was not there, we were instructed to go elsewhere, downtown, and It frustrated me, as I had my own expedition I wanted to embark on, and this would stall it.

I felt like sharing this. Anyway, I can't wait to try chasing my lost dreams. Thank you!