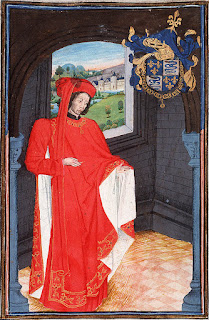 On my last night at l'Hameau de l'Etoile, the refurbished 17th century village in the south of France where I have been leading new adventures in Active Dreaming, I dreamed I was leading the group on a spiral dance through stables where powerful horses stamped and snorted their approval. As we danced, I improvised the words of a song with alternating verses in French and English. As I woke, the title of this dream was with me: "Le chanson des écuries du rêve" - "The Song of the Dream Stables."
I sat down with a cup of coffee to write with the energy of this dream. What came streaming through me was not exactly the Song of the Dream Stables but rather a poem in the rhythms of Charles d'Orléans, the poet-prince of medieval France who has featured in my dreams for manyyears. It was a sequence of dreams, visions and synchronicity - extraordinary even by my standards - that brought me to France in 2005 to lead a previous workshop at a chateau near Blois, the city Charles most loved, and where his body lies under the protection of the most fearsome gargoyles I have ever seen. The repeating line in my poem is borrowed from one of Charle's lyrical poems. Le temps a laissé son manteau.
Here is the poem as I delivered it to the group, in French, the day before I flew home for Thanksgiving:

The dream has dropped its mantle of mist, of silk and of regret I walk between earth and water to cleanse with their percussive beat

The winds narrate golden legends I glide as the crane, I eat the bull I live between love and Death The dream has dropped its mantle.

"Eating the bull" is no bull. Taureau is a preferred dish of the gardian, the cowboy of the Camargue, and I ate steak de taureau au fleur de sel in a restaurant named the House of the Moon Bull (Casa Toro Luna) on the square in the medieval town of Aigues Mortes.

Graphic: Illumination from an early collection of poems of Charles d'Orléans, depicting his time as a hostage in the Tower of London.

You are truly blessed by the God of Dreams in your travels and excursions into the imaginal realm of the countries you visit. The poem is magnificent; I look forward to more of the adventures of your French dreaming. Because I know that a spiral dance through dream stables is just the beginning. The dream dropping its mantel and allowing full vision is an image I can carry with me as my own cloak of dreams!

That poem is no bull either, Robert! I'd order those wonderfully lyrical rhythms over taureau steak, but that might just be me :-). Sounds like the winds of inspiration were blowing in along with the mistral... I look forward to hearing more of your travel reports, from both worlds and between!

Les vent racontes legendes d'or. Oh that we would all listen to the winds for the golden legends that are being sung and whispered. Thank you for being a storyteller, a dreamer, who fathoms the golden legends and tells the stories.

You live a charmed life; charmed and charming. I can only imagine the power of being in such a medieval town, eating taureau steak awash in the energies and magic of such a place. Thank you for carrying me there through your words and images.

Great poem, thank you for sharing! I love your books and I try to figure out my dreams, but it's still all Greek to me... :) I'm reading Dream Gates now and enjoying every minute.

This may be a little off topic from your French travels but I am curious about iroquois water drums for some reason perhaps with a A'nó:wara turtle design.

PS As some of you know, I am also posting narratives from my recent adventures in southern France at my beliefnet blog. Here's the link for an interesting episode of dream archeology: http://blog.beliefnet.com/dreamgates/2010/11/dream-archeology-in-southern-france.html