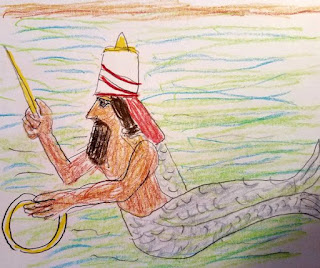 Working the Tarot can bring us in contact with past masters of this system. On a fall evening, I had been discussing Tarot and did a personal reading in which the last two cards were the Hanged Man and the High Priestess.
When I lay down, preparing for sleep, I had a strong sense of contact with a female personality. I had no doubt she was a priestess. I associated her with a woman who had led a great esoteric order in Britain, and used the Qabalistic Tarot (as they called it) in her teachings and rituals.[1] This woman died six months before I was born, but I had often dreamed of her and her circle.

The priestess invited me to go on an astral journey, and instructed me to put on special vestments, black, white and silver. She led me to an inner temple and showed me the gateway to the path of the High Priestess on the Qabalistic Tree of Life. This is the longest and most challenging of the journeys known as Tarot pathworkings, requiring the traveler to cross the Abyss. I was told that I must on no account veer, or even look, to right or left, where there were all manner of threats, temptations and distractions.
I embarked on the journey. At the place where the road crossed the path of Strength, I learned something new about the Lion. I was required, at this point, to leave my second body – my astral body – behind, as I had left my physical body behind in the bed. This was the condition for crossing the Abyss and “shooting for Kether”, the Crown.
I survived the whirling swords of attackers who may have been very fierce Gatekeepers. I came at last to a chamber with curving walls. Here the priestess reappeared, indicating that I had earned the right to knowledge of secret and essential things. She described the chamber as a “premonistory”, a word unknown to me. Through an observation window, I looked out into an ocean in which people swam about in strange diving suits that looked like the skins of giant fish. Or perhaps they were fish-people. Some of the males were whiskered like catfish. It came to me that these might be the true people of Atlantis.
The priestess explained:

We came from the sea. The Source of Light determined to experiment with several species. Since most of the planet is covered with water, it was possible that the most propitious environment was the dominant one.
The early Masters came from the waters, in the literal as well as the cosmic sense. This is remembered in the Chaldean stories of Ea, known to the Greeks as Oannes, and in the myths of the Dogon and other African peoples. Our form was human only by adaptation: the equivalent, on the physical plane, of the contact pictures projected by archangels and ascended Masters to greet and educate humans who are journeying into the astral on the paths of initiation.
Hence the significance of the Hanged Man, in its reference to the element of Water, and of Nun and Tzaddi, associated with Death and the Star, in the Qabalistic Tarot.[2]
We remember the founding priesthood as Atlantean, in the exact sense of Plato’s myth. It is recollected in a differing version in the Irish legends of Fomorians and invaders.
To this day, the sea is the guardian and repository of the deepest mysteries. It has absorbed and transformed the effluvium of human waste and veil; this is remembered in the story of the ten thousand sealed vessels Solomon had cast beneath the waves. Great entities live far between its depths, at levels no human has plumbed – or will ever plumb – in the corporeal body.
It is of the most urgent consequence that the sea should be appeased, its rulers propitiated. Never forget that the Moon is ruler of the sea and its tides. The seas have been ravaged by mankind. The fish are dying. It is time for humans to give back, through sacrifice.

After recording the passage above I picked up Dion Fortune's magical novel The Sea Priestess, and soon found myself reading, as if for the first time, the chapter in which the narrator picks two cards from a gypsy's Tarot deck: the High Priestess and the Hanged Man.
I recorded this beyond-astral journey in my journal on November 17, 1994.

Notes
1. The magicians of the Golden Dawn and its offshoots practiced "Qabala", as distinct from the Jewish Kabbalah. The attributions of the Tarot trumps and the Hebrew letters to the paths between the sephiroth on the Tree of Life are explained by Robert Wang in Qabalistic Tarot.
2. Nun, in the Hebrew alphabet, means "fish" and in Qabalistic Tarot it is identified with trump XIII, Death. Tzaddi means "fish hook" and is associated with trump XVII, The Star. The letter Mem, meaning "water", is identified with trump XII, the Hanged Man, which was chosen by the Golden Dawn as the symbol of the Order.
Journal drawing of Oannes by RM