Praise the Goddess and Stop Being an Ass 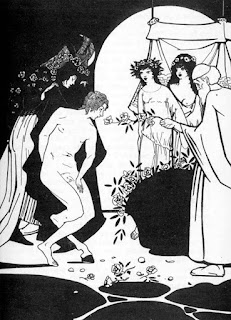 "O holy, perennial savior of the human race, you are ever generous in your care for mortals, and you bestow a mother's sweet affection upon wretched people in misfortune. No day, no period of sleep, no trivial moment hastens by which is not endowed with your kind deeds. You do not refrain from protecting mortals on sea and land, or from extending your saving hand to disperse the storms of life. With that hand you even wind back the threads of the Fates, however irretrievably twisted. You appease the storms raised by Fortune, and restrain the harmful courses of the stars.
"The gods above cultivate you, the spirits below court you. You rotate the world, lend the sun its light, govern the universe, crush Tartarus beneath your heel. The stars are accountable to you, the seasons return at your behest, the deities rejoice before you, the elements serve you. At your nod breezes blow, clouds nurture the earth, seeds sprout, and buds swell. The birds coursing through the sky, the beasts wandering on the mountains, the snakes lurking in the undergrowth, the monsters that swim in the deep all tremble at your majesty."
- Lucius praises Isis in Book XI of The Metamorphoses of Lucius, better known as The Golden Ass, by Apuleius. (P.G. Walsh translation).

Lucius starts out as a young man obsessed by magic. He seduces Photis, the maid of the witch Pamphile. She tells him that the witch is going to turn herself into a bird so she can fly to the room of a man she wants to have sex with. From a hiding place, Lucius watches the witch get naked and smear herself all over with an ointment, as she voices incantations – and she sprouts feathers and takes off.

Lucius is now eager to fly as a bird. Photis is nervous, but he persuades her to steal some of the ointment. In a comedy of errors, she brings him the wrong one. It turns him into a donkey. To recover human form, he must eat roses. The antidote is nearby. But before he can get to them, robbers burst in, and then use him as a pack mule, and through all his misadventures in the first ten books, he somehow never manages to eat roses.

Through his long ears, we hear amazing stories, one of which – the story of Eros and Psyche – has become a perennial myth, inspiring artists, tickling the diagnostic nerve of psychologists, teasing anyone who knows what it is to yearn for the beloved. In the final, eleventh book, when Lucius is returned to human form, we move abruptly from low farce and gratuitous violence to a deep account of spiritual transformation that will blaze in the memory of any sensitive reader like the midnight sun of the initiate.

The goddess of Fortune (Tyche) is depicted as blind, but Lucius is convinced she has a malevolent eye on him.

Dreams and visions guide the man who became an ass through death and rebirth under the aegis of the Great Goddess. He wakes, still a donkey, near the sea in a sudden panic and finds the full moon shining in his face across the waves. He dips his donkey head in the sea seven times, while invoking the goddess by all the names he knows in a beautiful prayer. He is unsure which aspect of the Goddess to invoke, so he calls on the Divine Feminine who shines through the thousand faces like the Moon before him. O Queen of Heaven…

Cleansing and prayer are followed by what looks like dream incubation on four legs. He falls asleep on the sand. A divine figure rises from the sea and stands before him, crowned with a wreath of flowers, with the mirror of the moon shining at the center and serpents and ears of corn on either side Her jet-black robe is covered with shining stars. In her right hand she carries a sistrum - a bronze rattle - and in her left a boat-shaped vessel with a rearing serpent for a handle.

"Here I am Lucius, roused by your prayers." The Goddess announces herself as universal, mother of all life.  "I am the mother of the world of nature, mistress of all the elements, first-born in this realm of time. I am the loftiest of deities, queen of departed spirits, the single embodiment of all gods and goddesses.. I order with my nod the luminous heights of heaven, the healthy sea-breezes, the sad silences of the infernal dwellers. The whole world worships my single divinity under a variety of shapes and liturgies and titles…But the peoples on whom the rising sun-god shines with his first rays--Ethiopians, and Egyptians --worship me with the liturgy that is my own, and call me by my true name, which is Queen Isis."

She reassures him that she has come to his rescue. “I am come to you in your calamity.”
She tells him to join the procession in her honor that will take place the next day and press forward until he comes to the priest with roses in his right hand. The priest will be prepared because, in that same moment, Isis is appearing to him in a night vision. Bilocation is hardly a big deal for a goddess. She cautions him that after he is changed back, Lucius will no longer be the man he was before; he must dedicate his life to her service and in return she will guide him through life and beyond death.

The priest, the next day, is indeed ready for him; he not only offers the roses but delivers a speech revealing that he knows Lucius' whole story and calls for people to bring a garment to clothe the naked human, and promises that under the aegis of Isis, Lucius will at last be freed from the slings and arrows of Fortune.

Lucius arrives at “the birthday of initiation”, natalem sacrorem [Book XI, 24]. He is transformed and dies to his former life. The whole narrative can be seen as a conversion story, wildly thrilling and never stuffy – taking the reader rollicking over a cliff into a place of awe.

Ridentum dicere verum quid vetat? May not truth in laughing guise be dressed? (Horace) The tale of Lucius, veering from bawdy farce and picaresque perils to the depth of spiritual awakening and divine dreaming, is at the top of my list in two categories (a) the comic novel and (b) visionary narrative.
Illustration by Jean de Bosschère: Lucius is returned to human form when he eats the roses being carried in a procession in honor of the Goddess, as Isis directed him in a dream.
Posted by Robert Moss at 4:10 AM