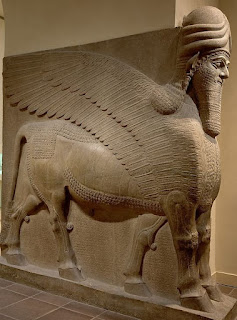 My dreams have drawn me back into a mythic world that is part of my earliest memories. As a boy, in dreams and in-between states, I sometimes glimpsed a powerful male figure with an elaborately curled beard, crowned with multiple sets of bull's horns, nested above each other. In these sightings, his eyes were closed. I felt he was dreaming or meditating on my life, and wondered what would happen if he ended the dream. I later discovered that his headgear (and beard) were distinctly Mesopotamian. Royals and deities were often depicted wearing crowns of nested bull's horns.
Such impressions encouraged and guided my youthful reading on ancient Mesopotamia, the "land between the rivers" (Tigris and Euphrates) that today, unfortunately, is roughly equivalent to Iraq. The baked clay tablets of this area contain the oldest known literature, and it deals with the essential and neverending themes of the human condition, with love and death, with friendship and betrayal, with dreams and the nature and destination of the soul.
Dreaming was vitally important to the civilizations of this region, from Sumer on. A dream might need to be "untied", an interesting term for dream work. To "untie" (pasaru) a dream might mean any or all of the following: (1) to tell the dream to another person; (2) for that other person to interpret the dream; (3) to take action - often involving apotropaic ritual - to turn away the "evil" of an unwanted dream. Such rituals might include transferring the energy and imagery of a dream to a piece of clay that could be dissolved by being cast into a river. In the epic of Gilgamesh, we can read of the hero seeking help from his mother, the goddess Nimsun (praised as "the great wild cow") to "untie" a dream in which he is crushed by a shooting star that he then embraces like a wife. She tells him the friend he has longed for is coming into his life - a reading that is fulfilled when Enkidu, his primal double, wrestles with him and then becomes his best buddy.
Over the past week, I've been in several dream adventures that have taken me deep inside this territory. I dreamed of a popular novel that had borrowed the story of Innana's descent into the Underworld and placed it in a contemporary setting. This excited me. The myth of how the great goddess Inanna pays a fearsome price for initiation and transformation in the realm of her dark sister, and returns to the surface only to find that her guy has forgotten her, is both wildly shamanic and easy for many of us who are struggling to follow a path with soul in this world - especially women - to understand. Inanna has to pass through seven gates on her descent to the "House of Dust", and pay off the gatekeepers seven times until she is naked, ready to be hung on a hook like a side of beef.
-
A couple of nights after my dream of a new book of Inanna, I found myself on a complicated dream journey, full of unexpected turns, in which I had to abandon my car and then carried it on my shoulder with a giant's strength I had not known I possessed. Then I entered a kind of pilot house and found myself looking down from a gallery over seven levels of the Underworld. When I left this scene, I announced to friends that I would return to collect a book manuscript that was waiting for me there.
-
I'm used to accepting research assignments set for me by the wanderings of my dream self. I pulled down essential books from my shelves, including Diane Wolkstein's beautiful rendering of the Inanna cycle (Inanna, Queen of Heaven and Earth) based on the scholarly work of Samuel Noah Kramer, and John Gardner's version (with John Maier) of Gilgamesh, based on scholarly translations of the "standard" version from the library of Ashurbanipal in Nineveh.
-
I was reminded, rereading the introduction to Gilgamesh, that John Gardner had also been seized by Mesopotamian myths early in his creative life. He was fired up, as I was, by the intricate and dedicated scholarship of A. Leo Oppenheim, most accessible in his book Ancient Mesopotamia and his important monograph, The Interpretation of Dreams in the Ancient Near East, which I have kept near my desk for over two decades. 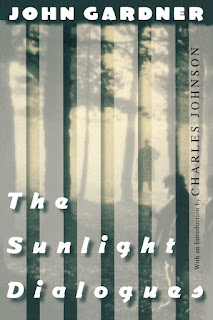 In 1972, a decade before working on Gilgamesh, Gardner published a remarkable philosophical novel, The Sunlight Dialogues - which he once described as "a loose, baggy monster" - in which a magician discourses on the Mesopotamian world-view to a reflective police chief in the small town of Batavia in western New York where Gardner grew up.
-
I went into Dove & Hudson, my favorite used bookstore, yesterday to see if I could find a copy of The Sunlight Dialogues. As soon as I headed into the Literature section, a copy of the novel greeted me, lying face up on a pile in front of the shelves. I carried it to Dan, the owner. "Did this just come in? Looked like it was waiting for me." "Just came in," Dan nodded. "Couldn't find room for it on the shelf so I left it out where you found it." I remarked that the shelf elf was in play.
-
"Don't go riding any motorbikes," Dan called after me.
- That brought a little shiver. In 1982 John Gardner died in a motorcycle accident (in Susquehanna, Pennsylvania) just after completing his work on Gilgamesh and just before his (third) wedding. The Gilgamesh epic is the story of a magnificent failure to overcome Death. The manner of John Gardner's death, crushed and bleeding on the ground, eerily echoed a tragic incident from his boyhood that shadowed his life and hounded him through nightmares.
As a teenager, working on his father's farm in western New York, Garder allowed his six-year-old brother Gil to ride on the bar at the back of the big tractor. Gil slipped from the bar, and fell between the tractor and the huge cultivator it was hauling, three tons of churning metal rollers. As he later told it, John Gardner did not apply the brakes, deciding his brother would be better off dead than horribly mangled. Gardner rarely applied the brakes in his later, wildly creative and wildly reckless life, as if defying Death to take him. Death waited until, aged 49, he had delivered the most readable version we have of the world's oldest literary account of why Death is inescapable for human flesh.
Posted by Robert Moss at 6:47 AM

The manner in which Gardner died, very much like his little brother who he allowed to be killed instead of maimed, the little brother's name: Gil....Gardner's life work and study GILamesh....a story about the hero attempting to overcome death. Shiver, shiver, bones to giver...

Do you think that Gardner's early act in regard to his brother was a pay back for the nature of his death and early death, since he was only 50ish?

John Gardner was only 49 when he died, and I wonder about all the remarkable book he might have birthed had he been given more time. A couple of his mss have been published posthumously; I chanced upon one of them (a novel set in Madison WI, where I am teaching again in a couple of weeks) today. "Payback"? You would need to ask him; I certainly would not presume to make that judgment. His response might be interesting, now he's had lots of time for "dreaming back" and has - hopefully - met and made peace with HIS Gil.

Just curious about Karma and what it is. Looks like something was chasing him throughout his life.

Wonder what was underneath his life that bubbled up into this reality? I'm making this observation in relation to your chapter on Jung and Pauli....very interesting.

Where can I get a good reading resource on the I Ching?

On the I Ching, you'll find some of the key sources listed in my notes to chapter 2 of my "Secret History of Dreaming". For practical purposdes of reading the Book of Changes, you want to work simultaneously with a clear introductory text AND with the classic Wilhelm/Baynes translation. Three introductory texts I often recommend are R.L.Wing, "The I Ching Workbook"; Jack M. Balkin, "The Laws of Change" and Alfred Huang "THe Complete I Ching" (which I like I lotg despite the presumptuous title). If you start casting the I Ching, you'll want to keep a record and note incidents that follow specific readings. In that way you'll begin to develop your PERSONAL Book of Changes, and you'll notice the patterns that come up again and again and those that do not.

Let's recall that I Ching begins with diviners reading animal parts (especially cracks in tortoise shells) and then noting - just before they ran out of tortoises under the Shang dynasty - that it was possible to develop a shorthand out of recurring patterns and recurring kinds of follow-up.

How often do I hear of Mesopotamia? Not much, but strangely today, a high school student of mine brought it up "out of the blue". Just chatting about how he had to learn about it, not too many days where Mesopotamia gets brought up randomly in conversation (especially in high school).
Add to this my dream last night of me and my youngest daughter laughing at the hands of my oldest, how fine and delicate they were in the dream, capable of some kind of delicate work that we found so funny. We were swirling fingers around, and pulling at something, laughing and laughing, now it makes me think of "unraveling".
I think I will re read your entry, and maybe there's a book somewhere. I need to seek, or dream on something I need to seek,,,.hmmm...thanks Robert! for the inspiration, its always fun how life rhythms when you open your eyes to notice.

Hi Grace - I love your dream of the laughing hands :-)

As for Mesopotamia, this is becoming a fine example of how life rhymes and dreams and synchronicity interweave within a community of connected people as well as within an individual life. Last night, on my current forum at www.spirituality-health.com, one of our dreamers shared a description of a copy of an ancient Mesopotamian image of a winged goddess figure standing on a lion. I opened this post at the precise moment I was printing out pages of an archeologist friend's PhD dissertation on ancient Mesopotamian cylinder seals...The exchange that followed enable us quickly to identify the goddess image as Ishtar (the Akkadian counterpart of Inanna) who figures very prominently in the Gilgamesh story.

I like to say that coincidence is when the universe gets personal. Why these Mesopotamian themes are unraveling in ways that feel important right now - at least for me and some of our active dreamers -is something I'll go on exploring. I'll no doubt post a follow-up report.