Talking through Frosted Glass: a Psychic Researcher Tries to Communicate after Death 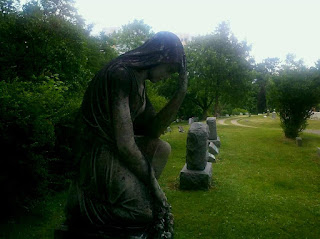 An eminent psychic researcher, trying to communicate with the living from his new residence on the Other Side, complained that getting through is as difficult as trying to dictate to an obtuse secretary through frosted glass. The whole quotation is marvelous:

"The nearest simile I can find to express the difficulties of sending a message - is that I appear to be standing behind a sheet of frosted glass - which blurs sight and deadens sound - dictating feebly - to a reluctant and very obtuse secretary. A feeling of terrible impotence burdens me - I am so powerless to tell what means so much - I cannot get into communication with those who would understand and believe me."

The speaker is the Victorian classicist, poet and pioneer parapsychologist Frederic W.H. Myers, one of the founders of the Society for Psychical Research. He used his language skills and poetic imagination to give us a rich vocabulary for the workings of consciousness, from "subliminal" and "supernormal" to "telepathy" and "psychorragy" (the last one did not catch on). He dedicated himself to producing evidence admissible by the scientific establishment of his day that would prove of the survival of consciousness after physical death.

Like several of his colleagues engaged in psychic research around the beginning of the 20th century, he promised to report back from the other side of death after he got there. He came through to many mediums, and some of the transcriptions are fascinating. He was credited as the author of several books on conditions in the afterlife channeled by receivers such as the gifted Irish medium Geraldine Cummins.

The frustration "Fred" Myers expressed above was part of a session with the medium the S.P.R. identified as "Mrs. Holland"; she just happened to be Rudyard Kipling's sister.

I found the quote in an extraordinary book, The Eager Dead: A Study in Haunting, by Archie Roy, a founder of the Scottish Society for Psychical Research. The odd title The Eager Dead is derived from the statement of one of the early luminaries of the Society for Psychical Research (the Australian Richard Hodgson) that he could not wait to get to the afterlife in order to report from there. The book includes a passage from Jean Balfour describing a family home where there was the sense of the dead pressing in eagerly to feel out and communicate with certain visitors – and hiding away in the presence of a certain guest, the medium “Mrs. Willett” (Winifred Coombe-Tennant) who is a principal in the main story.

Roy was both a distinguished Scottish astronomer, a researcher of the paranormal, and an author of horror fiction (Devil in the Darkness). I am delighted by the novelistic skills he brings to the long prologue to The Eager Dead (“Shears of Atropos”) in which he presents his characters in vignettes, starting with Queen Victoria always sleeping with a picture of Albert on his deathbed on her own headboard.

Archie Roy beavered away for years tracking the famous “Cross Correspondences” by which Myers and other Victorian ghosts gave partial messages to mediums in different places that made sense only when the transcripts were put together by the psychic detectives of the S.P.R.  Thus Myers gave partial notes on a place in Florence, larded with bits of Greek and Latin, to a medium in England and another in America who had no knowledge of each other. Put together, the notes made a coherent message. This sort of thing was taken to be evidence of authentic communication by a specific individual from the Other Side.

The astonishing central plot of The Eager Dead appears to be an endeavor by the dead ghost hunters to put a spirit into a body on this side – by arranging for the spirit of Edmund Gurney to be born to a spirited young woman in a conventional marriage to a much older man, whose natural psychic gifts had been enhanced through the tragic loss of her infant daughter. The woman was “Mrs. Willett”. Conception would require a living male, and Gerald Balfour, brother of  Arthur Balfour, a British Prime Minister, was chosen. A deep love affair blossomed, with a spiritual marriage in a chapel, and the result was a child who was named Augustus Henry. He grew up in ignorance of his supposed origins, was decorated for valor, escaped a Nazi P.O.W. camp and presented himself as a skeptic about survival when he enlisted a medium to talk to his mother after her death. (He is the subject of a recent biography by Welsh historian Bernard Lewis, Soldier, Spy, Monk: The Life of Henry Coombe-Tennant.)

Archie Roy had access to a vast amount of material from the Balfour family that was not fully available to previous writers. Though all the detail on the Cross Correspondences experiments is exhausting as well as exhaustive there are gems in his book, like Fred Myers' complaint about frosted glass.

In the spirit of his subjects, Archie Roy was quoted in his Times obituary (published on January 16, 2013) saying “If when I die, I find out I have not survived, I’ll be very surprised.”