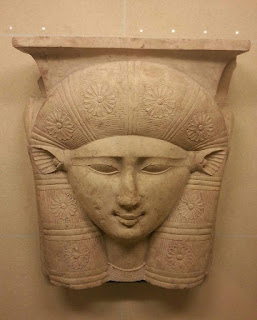 The goddess Hathor was beloved by Egyptians, especially around her temple at Luxor (Thebes) towards the end of the 18th dynasty. It is from that time and place that we have the first non-royal accounts from ancient Egypt of direct interaction with the gods in dreams.

This is in a stela of Ipuy, a master craftsman who lived at Deir el-Medina, honoring his direct vision of Hathor, It is a  very important landmark in the history of dreaming. Borrowing from the scholarly translations and commentaries, I have produced a fresh version of the key passages and given it the title:

Ipuy describes a dream that seems to be something other than a sleep experience. His heart or mind (the hieroglyph jb can be translated either way) goes traveling, probably in the hypnagogic zone. Ipuy was a craftsman, possibly a sculptor, working with a construction crew on a royal tomb.

While the inscription begins with generic praise of the goddess, its tone fast becomes intimate and personal, The goddess of beauty, love and motherhood places joy in his heart. He does not give us the details but we feel the stream of love and empowerment. She nurtures and nourishes him.

On the stela Ipuy is depicted standing beside a bulbous wine flask with blue water lilies and a bunch of lettuce on top. I dreamed many years ago that the Egyptians produced a "third eye wine" infused with blue lotus or blue water lilies called Sekhem-ra to enhance dreaming. In the pre-Google era I could not find confirmation. Now many Egyptologists agree and you can find their research online, though not the label Sekhem-ra.

Ipuy is not alone in his adoration of Hathor. We also have a stela inscribed for an overseer of the fields of the temple of Amun in his tomb in the village of Deir el-Medina, near Luxor, where Ipuy also resided. The name of the overseer is Djehutiemhab, which means "Jubilation of Tehuti" (a name for the god Thoth).

Like Ipuy, the overseer was clearly dedicated to Hathor, who also gave the promise of access to a happy afterlife in her embrace. The stela he placed in the chapel of his tomb described how Hathor gave him specific instructions on how to visit the site without traveling there. The goddess’ own words are quoted, and we feel the force of the numinous. Here is part of the text. I have added a title.

See your place without traveling

A hymn of the golden one, Eye of Ra,
who kisses the earth for her ka
A prayer to her beautiful face,
applauding her every day...

He [Djehutiemhab] said:
“I have come before the Lady of the two Lands,
Hathor, Great of Love
Behold….your beautiful face
and I kissed the earth for your ka
I am a real priest of yours
and I am on the waters of your command.
I don’t cast aside the speech of your mouth
I don’t ignore your teachings
I am upon the path which you yourself have given
upon the road which you have made.

How joyful it is when the one who enters your shadow
rests by your side!

You are the one who has spoken to me yourself
with your own mouth:

[He does what she says. Picturing himself in his tomb he concludes]

Place your face in order to let me bow down to it
Reward [me with] your beauty
that I may perceive your form within my tomb
in order to recount your power
in order to make young men know of it.[2]

We notice that Djehutiemhab is in this dream “while the earth was in silence, in the deep of the night”. He is under the “shadow” of the goddess and “rests by her side”. Hathor instructs him in her own voice to travel to a place at a distance – or bring it go him -without moving his physical body. Active dreamers will find confirmation here from 3,300 years ago of something we know through experience: dreaming, we can travel without leaving home. 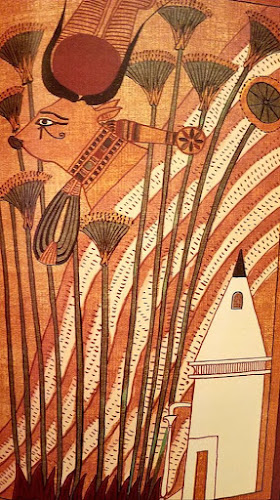 Hathor is, among so many things, a milk goddess. She is often depicted as a heavenly cow or with a cow head or cow ears. She is endlessly ripe and and nurturing and abundant. Since she is a also a star goddess, the milk that flows through her may be that of the Milky Way. She has an association with the Pleiades, and some of us, then and now, have encountered he intelligences of that star system as the Seven Hathors.

And she is the Eye of Ra,and is addressed by that title in the opening of Djehutiamhab’s text. The Eye of Ra is the ferocious feminine counterpart of Ra, ever ready to inflict punishment or exacxt justice, an ultimate weapon in the cosmic battle against forces of chaos and evil. Sometimes the Eye of Ra is called the four Hathors and they are depicted as four giant cobras facing the four cardinal direcrions, prepared to strike.

There is a close association between Hathor and Sekhmet - both in their scariest mode - is in a text known as The Book of the Heavenly Cow. [3] The version we can read today is a compilation of tomb inscriptions from the period or Ramses II, but is much older.

In brief, the top god in the story, Ra, learns that humans are plotting against him because he has grown old. He is advised by other gods to mobilize his Eye, which has been used to maintain order and fight the forces of cosmic darkness. He plucks the uraeus cobra from his third eye and it becomes Hathor in warrior mode. She receives his order to destroy humanity and appears on earth as Sekhmet, an unstoppable, ravening lion.

While some humans are left, Ra relents. But he can't turn of the killing frenzy of hie Eye (Hathor/Sekhmet) until he has 7,000 jugs of beer dyed red to look like blood poured in her path. The Lady of Destruction likes a drink. She drinks until she passes out - which is why she is also known as the Lady of Drunkenness. When she wakes up three days later, her killing lust is gone and humanity survives.

You can't keep a great goddess in a frame.

[2] The text of the stela of Djehutiemhab was first published by Jan Assman, with German translation, in "Eine Traumoffenbarung der Göttin Hathor” Revue d'égyptologie 30, 1978, 22-50.I have drawn on the English version and commentary by Kasia Maria Szpakowska in "The perception of Dreams and Nightmares in Ancient Egypt", Ph.D diss., (University of California Los Angeles, 2000) 226-232

[3] Eric Hornung’s translation of The Book of the Heavenly Cow is in William Kelley Simpson ed., The Literature of Ancient Egypt: An Anthology of Stories, Instructions, Stelae, Autobiographies, and Poetry (New Haven: Yale University Press, 2003)

Graphics: Top: Hathor with cow ears. Photo taken by RM in the Louvre. Bottom The Hathor Checkout. Beyond a simple mastaba tomb, we see Hathor, as divine cow, moving through waving stalks. The soul departing on the journey to the Duat (Otherworldl) hopes to be received and blessed by her. From the Egyptian Book of the Dead (Papyris of Ani)