From the Indisciplined Territories 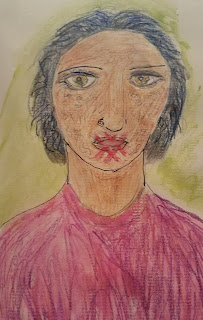 March 16, 2020
In a time of lockdowns, plane cancellations and shuttered restaurants, adventures in dream travel are more welcome than ever. Last night I enjoyed the company of a fascinating group that included a prince of Persia and a French aristo who asked me to make a picture for a countess who will invite me to her villa at Cap St Jean. A very exclusive travel agency handled all the arrangements and sent me an exotically beautiful young assistant

FROM THE INDISCIPLINED TERRITORIES

I slowly take in the unusual patterns of paint and ink on her brown face. Her cheeks are covered with fine ink that may be pictographic script. Some of the symbols look like musical notes. Over her mouth are crossed diagonal bars of red paint. The shape reminds me of heraldry. Though bars over the mouth might suggest an effort to suppress the voice, the opposite effect is at play here. She speaks clearly and strongly, in British Empire English with an island lilt.

I emerge from this encounter excited and intrigued. As usual, my dream sets me research assignments, tracking names of places and people and of the strange conveyance, like a miniature carousel on wheels, that took us through a forest.  It was called a "coneebo", possibly written as conibo. I may look into indigenous traditions of face paint and tattoos.

I will not waste a moment on analysis. A dream like this is, first and last,an adventure in another world. Some elements may spill over into my physical reality but I am satisfied with the adventure in its own right. I will draw on its creative energy with pencil and colors and keyboard. Maybe I can draw and paint the relief map I was showing people in the dream. Perhaps it will reveal the location of The Indisciplined Territories.

I wonder whether I have made the picture the countess wants. If so, can I expect an invitation to Cap St. Jean Ferrat? I am unlikely to get there by plane in the near future, but dream flight is always available and I do have a very special travel agent to call.

I was soon reminded that the Conibo are an Amazonian people and rapid research online produced many photos of elaborate face painting, for which women are the artists. Catalog copy for an exhibition at the Museum of Natural History in New York titled "Body Art:Marks of Identity" included this:

"The intricate rectilinear and curvilinear designs that cover the faces, clothing, houses, ceramics and other objects of the [Shipibo-Conibo] cultures on the Ucayali River of the upper Amazon in Peru derive from the origin of the world, when everything in the universe was covered with such lines in a continuous unified design. The original patterns were lost, or obscured, due to misdeeds of failed proto-humans, but they are still present everywhere if one can see them. Male shamans can reclaim the patterns through hallucinogenic visions and relay them to artists who bring them back into the world through the decorations they create on objects. The women artists are aided in realizing the intricate patterns by placing the colorfully veined leaf of the iponquene plant over their eyelids before they start — the plant is named after a complexly patterned armor-headed catfish. These harmonious designs are associated with human cultivation and prosperity. In rituals, shamans can sing the tunes of songs from this labyrinth of lines."

I have not yet found an image of the barred pattern over the mouth and chin displayed by the exotic travel assistant in my dream.

The outbrake of the Covid19 virus made me think about your article: When Sekhmet licked the hyenas, from june 2014. Wonderfull to read again how you succesfully helped your body fighting the infection you had, with images from a dream workshop. Maybe this period is a good time to post a few article with this theme. How we can help our body fighting a virus with the aid of our dreams. To give people strength and hope in this uncertain time.

Thanks for your long memory James and for the welcome prompt to revive my experience of healing infection through mythic and imaginal resources on this blog. I hope it will encourage others to do this kind of inner (but also transpersonal) work. I will no doubt post more on this theme,which is a major element in my current online courses for The Shift Network and my new book, which will be published in October.