Egyptian dreams: I’ll See Your Snakes and Raise You 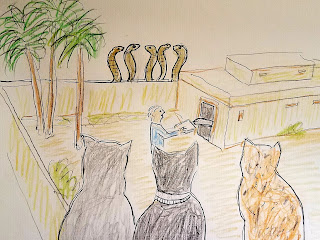 Yet again, I am dreaming of Egypt, the Egypt of mythistory and the Egypt of the imagination. From last night's dream report:

A drama is unfolding in the courtyard of a villa in ancient Egypt. Huge snakes, larger than humans, rise above on of the walls, raised up like cobras. Sometimes there are five, sometimes seven. On the other side of the compound are beings who can appear as humans or cats. There is contention between these forces. I am here to mediate, to make a balance. I have no fear of the serpents and I know the cat people have my back.

I approach the door of the house with the typescript of a book. I know this is what is needed to make peace. What may be a snake or an arm darts through the open door and carries my book to where it is needed. I know this is successful. 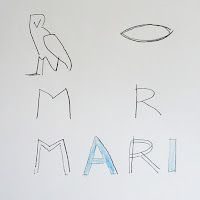 Later I am with leaders of an esoteric order. The chief is a very old, very large woman. She may be deceased, projecting a form like the one she had near the end of physical life. Her right-hand man, the Warden, is also very old but maintains a military bearing. He is wearing a dark blue suit of heavy wool. They want me to understand that the correct use and pronunciation of a word with hidden vowels is essential. I have to figure this out; they won't just give me the combination. I see the owl glyph, doubled, and hear the consonants M M. I play with sounds like Mama. Then I see the owl glyph followed by the glyph of an open mouth and hear the consonants as M R. This brings me to MARI – and maybe Mary? It seems she is the very heart of the mysteries.

Reality check: I am again immersed in Egyptian studies. Yesterday I was reading The Dawning Moon of the Mind, Susan Brind Morrow’s beautiful rendition of the poetic text from the Pyramid of Unis (also spelled Unas). Long ago I was stirred to the roots of my being when I read earlier translations  of related texts in the splendid recreation of chambers from the mastaba tomb of Unis’s son, Unis-Ankh, at the Field Museum in Chicago. I have been studying hieroglyphs again, partly inspired by the remarkable work of Normandi Ells, whose new book Hieroglyphic Words of Power is being published this year.  I have a hunch that I know the identity of the esoteric luminaries in the last scene. They dreamed of Egypt too. As so often, my dreams have set me research assignments. And maybe another book to write?

Those rising cobras remind me of the wall outside the heb sed courtyard at Sakkara. When you travel from the Pyramid of Unas down a staircase and into the open courtyard in front of the Step Pyramid, if you turn you see them. Seven. Just like the image of the hieroglyph ARIT. - Normandi