Healing with an artist's brush 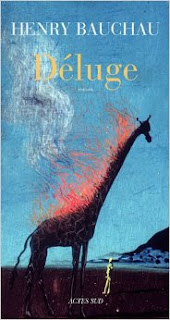 He is a pyromaniac, but he burns only what he loves. She meets him at the port of a Mediterranean city, sketching vivid but unromantic scenes of seagulls converging on the barges collecting refuse from garbage trucks. She sees him crumple and burn his drawings, one after another. Strangely, as one of his sketches burns, it lifts high into the air and becomes a fiery seagull.

He is Florian, a legend among art collectors and gallery owners. To burn even the most tentative of his sketches is to burn a banknote of the highest denomination. He is a man who has been fleeing certain things all of his life. The young woman has also come to this southern port in hopes of escape, from a disease which is never named but whose nature we can guess from the way the cells multiply and progress, like those moving mountains of garbage in the harbor.
The young woman becomes the elderly artist's helper, the one he can lean on in every sense. As she gives to him, we understand that he is giving to her. He embarks on a new series of paintings, making her model for him. She cannot understand, to begin with, why he studies her and then paints more of his pictures of steaming garbage and grim harbor walls - until she grasps that he is painting the interior of her body, the living landscapes of her disease.
He burns and crumples, but the work progresses, until she has stripped herself naked  under his eyes and the result is a canvas that fills her with terror, a scene of a dark, intractable wall, a vista without hope. He lashes himself into a new burst of creative power and little by little something like a tunnel opens in that iron wall.

He takes his brush and digs into the wall. I suffer, we suffer together. He is digging a tunnel through the middle of my illness. He drives it through with his brushes...He knows me...I have the impression that an enormous nail, the one that pinned the seagull that resembled me, now pins me to the wall...We are crying out together. I lose consciousness, with the sense that I am swimming, naked, in a very calm blue-grey ocean...

When she returns to herself, the artist shows her his last image. A deep tunnel goes through the rubble and rotting garbage, all the way through that terrible, unyielding wall. through the tunnel, she sees two white seagulls flying towards open blue water and a rising sun. Her heart leaps.

Beyond happiness, incandescent joy rises in me. I think only of the two seagulls winged by wild freedom, the harsh and savage freedom of the world.

When she goes to the doctors for her next tests, they are dumbfounded. There is no trace of her disease. The artist has burned it out of her with his fiery brush.

This is a summary of the passage through art into healing described in an extraordinary novel by Henry Bauchau titled Déluge. It is an inspired and mobilizing vision of imaginal healing by a deeply wounded healer, and I recommend it strongly to all readers who can cope with the French language.
The story takes us further, into Florian's work on an immense canvas that holds the whole experience of the Flood. Bauchau's word-pictures take us right inside a great artist's perception of color, and a creator's trembling sense that the same powers that can make a world can also destroy it.
Not the least remarkable thing about this novel is that the author completed it at the tender age of 96. Bauchau, a poet, dramatist and psychoanalyst, was born in Belgium in 1913; he was a friend of Albert Camus and fought with the French Resistance and the Ardennes during World War II. May he continue to thrive and give us more of his magnificent literary vision!

Déluge by Henry Bauchau is published by Actes Sud, 2010. The translations are my own.

Wow...I could feel all of it. I loved every word! Thank you.