Where is your body now? 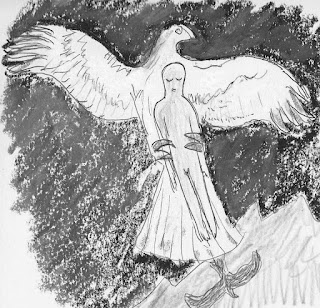 Wherever spirituality is alive, conscious or lucid dreaming is recognized as the most important source of instruction on the soul’s survival of death and its condition in the afterlife.   Even St. Augustine – who had problems with dreams when he abandoned his lover for the church and decided that sex was disgusting – recommended paying the closest attention to dreams in which the dreamer is conscious he is outside his body. In a letter he wrote when he was working on The City of God, Augustine quoted the experience of one Gennadius, “a physician of Carthage”.
In a dream, Gennadius encountered a radiant young man who led him to an otherworldly city where he heard singing “so exquisitely sweet as to surpass anything he had ever heard”. Waking, the doctor dismissed his experience as “only a dream”. His radiant visitor returned the following night and asked Gennadius whether he had been asleep or awake when they had met before.
At this point, the doctor became aware that he was dreaming. When his guide asked him, “Where is your body now?” he became aware that he was also having an out-of-body experience. This was the preliminary to a teaching session in which he learned that the soul’s condition after death is similar to its condition in dreams, and he lost his doubts about life after life.
The story of Gennadius finds echoes in the experiences of conscious dreamers today. Since the publication of Raymond Moody's Life after Life (1975), there have been a flock of accounts of visionary journeys reported during "near-death experience" (NDE). It is not necessary to suffer life-threatening illness to make a conscious journey to explore the conditions of the soul after death.
In a dream that was the gateway to many further explorations, I found myself in a large room where people in a circle were waiting for me. An electric blue fire burned in an alcove. A radiant guide indicated that I was to lead them through it. As we danced into the fire, my guide asked, "Where is your body?"
Now aware that I was dreaming and out of the body, I was briefly tempted to rush back to check on the inert form on the bed. But I managed to stay with the dream and was shown a number of places of teaching for people who seemed to have passed on. At one of these teaching facilities, students of all ages joined their voices in songs of extraordinary beauty. The chorus of one of these songs stirs in me now:

Behind the singers rose the buildings of a beautiful university. I have been able to visit this wonderful place of higher learning, meet some of its faculty, and audit some of its classes. For me it is the true Alma Mater, the school of Mother Soul.
None of this is beyond your abilities!


You are born to fly and in dreams you remember the soul has wings!