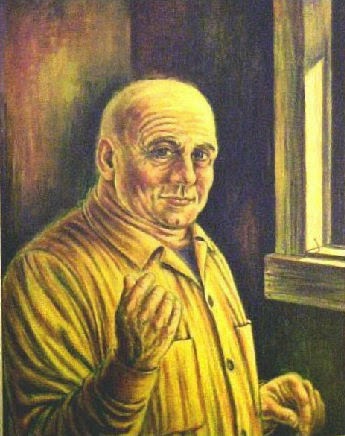 “You must read Jane Roberts!” the lively, voluble Latin woman shouted at me on my doorstep before she had even crossed the threshold, on August 5, 1988. I had met her in Brazil, a couple of years before. We shared a taste for caipirinhas and spiritual adventures, and when she told me she was visiting a daughter who lived half an hour south of me, I naturally invited her to visit us at the farm.
I had heard of Jane Roberts, and was aware that I was living in her neighborhood, since she came from Saratoga Springs and later lived in Elmira, New York, whose other familiar presences included my beloved Mark Twain. But I had never opened one of her books. I was wary of psychic mediums, maybe because one in the family had foreseen my death (accurately) when I was three years old. I was usually unimpressed by channeled material, which sometimes seemed to come through in overly pompous, foggy or inelegant forms.
I could not resist the archetypal cameo of the messenger on the doorstep. I went to a bookshop and purchased everything by Jane Roberts that they had in stock. I started reading Seth Speaks, as Romelia suggested, and discovered one of the books that became life rings for me in a period of psychic storms and shamanic trials.

Who is Seth? In describing himself, he prefers not to use the word “spirit”. He jokes that he is a “ghost writer”. He says, “I am an energy personality essence, no longer focused in physical matter...     To write this book…I adopt from my own bank of past personalities those characteristics that seem most appropriate.” He can communicate through Jane Roberts because she is a "window". Within her psyche is “what amounts to a transparent dimensional warp that serves almost like an open window through which other realities can be perceived.”

Where is Seth based? Not in what we think of as the afterlife. “You must die many times before you enter into this particular plane of existence.”
The plot thickens when, quite late in the book, Seth makes room for an entity called, for convenience, Seth Two, a personality operating on a level above his. In her introduction, Jane Roberts speculates  that “Seth may be as much of a creation as his book is.” A form of the Speaker generated by a multidimensional intelligence to communicate in her time, and ours.
As a former journalist, I am trained and disposed to check on the reliability of any source. But the true test for a source of this kind is the quality of the material that comes through. And the Seth material is extraordinary. Here are the main things that Seth Speaks confirmed for me, while helping me to grow my ability to explain the rules of engagement in the multiverse to myself and others:

We live in many times, and it is all happening Now

“You live many existences at one time." We are connected to personalities living in the past and the future and in parallel realities. Their gifts and their dramas are relevant to us. And it is all happening Now.
Reincarnation is for real, but only one of many after-death options, and we mustn't get trapped in linear conceptions of karma and in past-life "passion plays" because any past or future is a probable reality that can be accessed and changed Now.
“You may draw upon knowledge that belongs to other independent selves.” We can tune into parallel selves by switching consciousness and by above all by waking up to what is going on in our dreams. Great creativity is "multidimensional art", in which the creative mind is able to draw on the gifts and the energy of many selves, In ordinary life, we may be able to borrow physical strength and skills from other selves who developed differently from our present self by drawing on "latent layers" that are traveling close to us.
You can tune in to parallel selves by switching consciousness “They are a part of the same river of your identity.” Great creativity is multidimensional. “Its origin is not from one reality, but from many, and it is tinged with the multiplicity of that origin.”

Wake up and dream

Seth is one of the really great dream educators. He is crystal clear about the important things that go on in dreaming. Consciousness travels outside the body, every night, in dreams. Dreaming, we travel to other realities, no less real (maybe more so) than the physical world.  Dreaming, we choose from an infinity of probable events those which will become physical. As we become conscious dreamers, we can not only shape reality on other planes, but can engage in reality creation on the physical plane. Thus:

If we want to become better dreamers, and thereby more conscious citizens of the multiverse, Seth insists we much change our relationship with sleep. He recommends two sleep periods in the 24-hour cycle, each of about three hours. He notes that oversleeping results in sloth and fogged memory because consciousness or spirit has been away from the body too long. All of this becomes clearer is we grasp the simple fact that consciousness leaves the body during sleep.

We are in the afterlife now

Seth tells us, that in sleep and dreams we are already engaged in the same dimension in which we will have our after-death experiences.

“You are already familiar with all conditions you will meet after death.”

“When you dream you are flying, you often are. In the dream state you operate under the same conditions, more or less, that are native in a consciousness not focused in physical reality. Many of your experiences, therefore, are precisely those you may meet after death.”

As for ghosts, well, the living manufacture ghosts all the time.

“You yourselves appear as apparitions to others, particularly when you send strong thought-forms of yourself from the sleep state, or even when unconsciously you travel out of your physical body...Your rooms are full now of thought forms that you do not perceive.”


How multidimensional teachers are made

What thrilled me most in Seth Speaks was the account of the training and functions of a true teacher in the multiverse.

“In my work as a teacher I travel into many dimensions of existence, even as a traveling professor might give lectures in various states or countries. Here, however, the resemblance ends, largely, since before I can begin to work I must set up preliminary psychological structures and learn to know my pupils.”

“When I enter your environment, I turn my consciousness in your direction...
When I contact your reality…it is as if I were entering one of your dreams."

A multidimensional teacher is trained to monitor and engage with all “probable selves” of a subject in different times and dimensions. (In her Oversoul Seven trilogy, Jane Roberts gives a simplified and engaging version of how this work).
A teacher of this kind opens paths and doors in the multiverse where none were perceptible before. “The pathways we make continue to exist and can be used by others.”
This kind of ambassador of the multiverse remembers enough of life and death to have developed a cosmic sense of humor.

"When one has been born and died many times, expecting extinction with each death, and when this experience is followed by the realization that existence still continues, a sense of the divine comedy enters in."

I jotted in the margin, I want that job!

Art: Rob Butts, Jane Robert's husband, made this picture of Seth, which Seth (in channeled session 168 in which he called Rob "Joseph", as he called Jane "Ruburt" ) pronounced an excellent likeness.

“This sleeping self of yours is far more knowledgeable than the waking self of which you are so proud.” Such a great line!