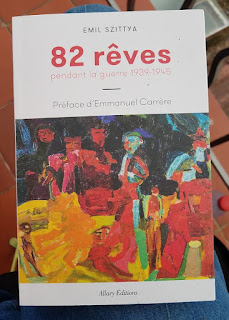 A Swiss painter dreams on the eve of the German Occupation that millions of little French souls are playing like multicolored butterflies. An army of robots appears and attacks them with giant clubs, injects them with toxic words from newspapers that make them fight each other, and then chews them up with the sound of shattering crystal.
A septuagenerian philosopher, ashamed that he is too old to be mobilized to defend France, dreams that he is transformed into a moldy, rickety armchair that falls from a high window to be kicked by rag-and-bone men picking over the trash below.
A wealthy socialite suspected of being a German agent dreams before his suicide that he is up on a platform in a beauty pageant in which brothel madams are choosing the most likely man. He thinks he is looking really good but when the prize goes to an obese lump of a man he is enraged. He wrestles the prize away and puts it around his own neck. It is a dog collar.
The French-Hungarian novelist and painter who took the pen name Emil Szittya ("Emil the Scythian") collected and published 82 raw dream reports from people in all stations of life over the years of World War II. He introduces the dreamers but does not comment on their dreams. Fascinating but hardly cheerful stuff since the dreams are as dark as the era and leave some of the dreamers - as one told the collector - "swimming in sweat".
An artist interned at Drancy concentration camp reports that every night he dreamed "the best dream of my life". Racked by stomach pains all day long, he dreams he is given a vast platter of sweet noodles that he devours with gusto. In regular life he always detested this dish.
A bold young aviator confesses that "in my dreams I am a man who wets his pants." (un homme qui fait dans ses culottes).
A conscripted pimp with a soldier friend dreams he is looking for his poule in the house where they operated in Paris. The madam tells him she has gone to the 16th with les Fritz. When he finds her there, his army friend is threatened by German soldiers with machine guns. Waking he breaks with his only friend for fear he will bring him into danger.
In these oppressive dreams of war, humans are often transformed into objects - the philosopher into an armchair, Goethe (in the dreams of a German officer) into a poison pill and objects come alive in awful ways. A dirty military boot burst through a painting by Douanier Rousseau, tearing it apart.
A malign wind blows through many of the dreams. "It's only hot air," a German officer tells Szittya in a gallery when asked whether he thinks the paintings are Jewish art. He recounts a strange and complex dream. "C'est du vent. It's wind. It's all wind." A young French girl dreams that a wind blows her father, a slater, off the roof where he is working into a hole where soldiers are doing evil things.
Szittya's collection sending me back to books in which two other French authors recorded their dreams and let them expand into stories without analysis: Georges Perec's La boutique obscure and Michel Leiris' Nuits sans nuit et quelques jours sans jour (translated by Richard Sieburth as Nights as Day, Days as Night).
Posted by Robert Moss at 11:00 PM

Millions of multicolored butterflies attacked by an army of robots... a striking way to describe the attack of the German warmachine on pre-war France. Any chance this book has been translated into English? And for sale somewhere?

I don't think this has been translated. First published in France in the 1960s, it has been out of print until this new edition appeared this year.