The Place Between Sleep and Awake 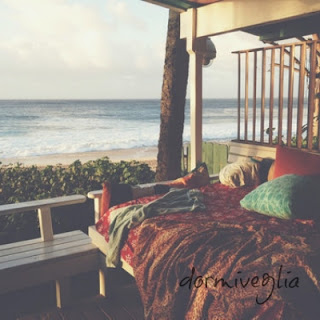 I have been following these fairy directions for a very long time. If you can train yourself to maintain a state of relaxed attention in this in-between state, called dormiveglia in Italian, you will notice that you may be receiving a whole menu of possibilities for lucid dream adventures. Images, faces, landscapes rise and fall. When you learn to hold one of them in focus, it may become the portal for a conscious journey.
The Parade of Faces is a frequent phenomenon in this state. You may feel you are among a crowd of people, with faces and figures rushing by. Sometimes one may turn to look at you, which can be an interesting opportunity to enter a shared experience with another dream traveler you may or may not know in ordinary reality.
Sometimes the images rising and falling before you look like a child's sketches, or cartoons.
A frequent sighting for me, in this in-between state, is of what initially looks like the weave of a carpet or the mesh of a net. I have come to recognize this as a kind of border between states of reality and consciousness. With intention, I can part the strands and find myself in another order or reality.
The liminal state of hypnagogia, which I often call the Twilight Zone, is a good place to become aware of your ability to travel beyond the body. I often find myself lifting out of the body quite effortlessly in this state, without bumps and grinds. Sometimes, when tired, I simply rest half in, half out, of my physical form. Sometimes I float up to the ceiling. Quite often I go flying, like a bird, over my sleeping city and to places far away.
As Tinker Bell counseled, the Place Between Sleep and Awake is, above all, a wonderful place to rendezvous with other beings and other intelligences. It is a state in which we often become away of the psychic activity around us. We may receive visitors, and we will want to learn to screen and discern who we are letting into our space.
Often, I find different casts of characters waiting or popping up as I hover on the edge of sleep or linger in the twilight zone of hypnagogia. Sometimes, they appear to be quite literally on stage, or in the wings, waiting for me to show up in order to start or resume a play. More often, they seem to be characters in life dramas that are being played out in other times or in parallel worlds, dramas in which I have a lead role from which I may have been absent while attending to things in my default reality.    The 3rd century philosopher Iamblichus counseled in his treatise On the Mysteries that we should pay special attention to “god-sent experiences” that become available in the “condition between sleeping and waking”. He observed that “when sleep is leaving us, and we are beginning to awake...voices are heard by us” and “sometimes a bright and tranquil light shines forth".
I frequently have inner dialogues in the Place Between Sleep and Awake, with sources of knowledge I have come to trust. This is a time when I can often receive streams of counsel and information from inner guides. In Dreamgates, I record some of my conversations with the intelligence I decided to call "G2". He carried the vocabulary and knowledge of a great Western Mystery order. I felt he was a transpersonal figure, though in no way alien to me. Many others have come to me in this liminal state. The most important of these inner guides is certainly no stranger; he is a self who observes and operates on a level of reality above the one I inhabit while living on this Earth in a physical body.
In the history of creative breakthroughs in every field, including science and technology, the hypnagogic state has been of vital importance. In this liminal zone it is easy to make creative connections, which often involves linking things that seem to the routine mind to be unconnected. Many inventions and discoveries attributed to dreams by over-hasty writers - like Kekule's discovery of the benzene ring - are actually gifts brought through from hypnagogia, to such an extent that I call this zone of consciousness "the solution state" in The Secret History of Dreaming.
The Greek Cypriot author Andreas Mavromatis wrote the only book I know entirely devoted to this liminal state of consciousness, marrying scientific data to rich accounts of creative and visionary accomplishments in this zone. In Hypnagogia: The Unique State of Consciousness Between Wakefulness and Sleep, originally published in 1987, Mavromatis writes that


“Hypnagogia…facilitates the emergence into consciousness of material that might otherwise remain unconscious. It might, thus, also constitute the platform onto which is periodically raised the substratum of continuous but not always conscious mental activities taking place throughout life. As such, it opens great vistas of psychological exploration. Its introspective study may furnish the individual not only with the benefits of an integrated personality but also with the means of discovering new or little known modes of experiencing which will undoubtedly enrich him/her as a psychological entity.”

The Place Between Sleep and Wake can be the very best place to go on with a dream or go back inside one. You may want to practice dream reentry to clarify information from a dream, or get to its full meaning, or continue a conversation with a dream character. You may need to reenter a dream because there are terrors to be overcome, or a mystery to be explored, or simply because you were having fun and adventure and would like to have more. Or because Tinker Bell is waiting for you.
The Place between Sleep and Awake is the best place to develop the continuity of consciousness prized by advanced practitioners of the yoga of sleep and dreams. I am talking about growing your ability to maintain awareness and witness perspective as you move back and forth between sleep, half-sleep, dream, lucid dreaming, what Sri Aurobindo called “the sleep of experiences” and the dream of everyday life.
For me, it is less interesting to wake up to the fact that I am dreaming than to be able to observe myself and be fully aware that at every turning in any state of being and consciousness, I have the power to choose what I will do and to test the limits of any reality.

That’s where I am consoled by a voice a gesture an image or the appearance of someone who knows and shares my pain my concern my beliefs. Sometimes if it weren’t for this portal to anther reality I would be quite unable to
continue to function. It is always surprising yet gently given information with close affinity to what I have been seeing thinking feeling but so much enhanced or answered like a dialogue by what I know is not me, a higher truth than I could know. And puzzling. Reassuring just enough to challenge more life but no clear answers. So this place between sleep and wake nurtures me and seems to be more active for me than actual dreams at the moment. It has the intensity of a magic dream but it is like the veil is down there is no need for code although the clarity is only on the level of emotion the mind is challenged. Enough said this place is kind