Call of the Hawk 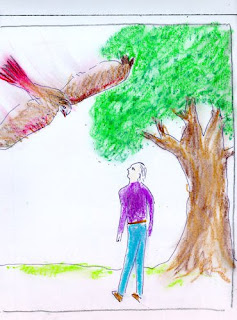 Many years ago, I spent a weekend driving around the upper Hudson valley of New York. I was profoundly dissatisfied with my life. From the outside, that life may have looked like a dream fulfilled. I was a bestselling thriller writer; publishers competed to offer me high six-figure advances, laid on stretch limos and made sure the Dom Perignon waiting for me in the hotel suites they paid for was perfectly chilled. And my life felt hollow. I knew I had to make a break with big cities and the fast track I had been on and get back in touch with the spirits of the land and my own deeper creative spirit.
On that upstate weekend, a few miles from the village of Chatham NY, a Realtor showed me some land with a run-down farmhouse that might be available. The house would need a ton of work, but as I walked the land, half of it still primal woodlands where the deer drifted in great droves, I knew in my gut this was a place I needed to be. I sat under an old white oak behind the house, feeling the rightness of the place but also that I needed a further sign.
A red-tailed hawk circled overhead, dipping lower and lower, screaming urgently at me in a language I felt I ought to be able to understand. I did not speak hawk, but I could not fail to get a message when she proceeded to drop a feather between my legs.  That visitation by the hawk was the clincher. I purchased the farm, moved to the country, and soon found myself changing worlds, which is what can happen when we radically change the way we inhabit the world.
When we had restored the farmhouse and moved in, I was drifting one night in that in-between state of consciousness the French used to call dorveille, sleep-wake. I found myself gently rising from my dormant body on the bed, in a second body, a dreambody - not an exotic experience for me, as far back as I can remember. I floated out over the night landscape, and found that in my dreambody, I had wings - the wings of a red-tailed hawk, scaled to my size. I had a marvelous time enjoying a highly sensory experience of flight, riding thermals, swooping and soaring, seeing the world at different angles.
I found myself flying north, over Lake George and then Lake Champlain. I noticed the Northway and modern towns were missing from the landscape below me. I felt the tug of someone else's intention, and followed it, out of curiosity, to a cabin  in the woods somewhere near Montreal, where I was received by a beautiful, ancient indigenous woman. She spoke to me for a long time in her own language, her words like lake water lapping, while she stroked a beaded belt that hung from her shoulder, with the design of a she-wolf and human figures. I was fascinated, but did not understand a single word, any more than I had understood the language of the hawk. I knew I had been in the presence of a woman of power, and I hoped that, since this felt urgently important, more would be revealed. 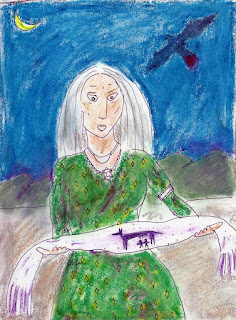 The design of the belt, in my night vision, proved to be the equivalent of the hawk's feather: a way I could receive and confirm a message even though I lacked a necessary language. My first Iroquois friend - met later through an interesting series of coincidences - was able to show me a wampum belt identical to the one in my vision. It was in the archives of the New York State Museum at that time; since then it has been returned to Onondaga, the traditional capital of the Confederacy of the Six Nations of the Iroquois, or Longhouse People, among whom the Mohawk are Keepers of the Eastern Door. He told me it was believed that the belt was the credentials of an ancient mother of the Wolf Clan of the Mohawk People.
I entered deeply into the study of the traditions of the ancient dream shaman who had called me, when I was flying on hawk's wings. This opened to me ways of dreaming and healing that were possibly shared by all our ancestors, but which have become atrophied, when not actively suppressed, in modern society. I came to call the ancient shaman Island Woman; this  reflects the fact, which I was able to confirm through historical research, that she was captured as a young girl from the Huron/Wendat, called by the Mohawk the Island People, to be raised as Mohawk. In order to receive her teachings fully, I had to study the Mohawk and Huron languages, and reclaim terms from early sacred vocabulary.
New dreams eventually called me to leave the land to which the hawk had called me and teach what I had learned about dreaming the soul back home and dreaming for our communities. We sold the farm to a woman who promised to conserve the land.
As we were leaving the house, after our final checks, I was inspired to go back inside for no reason I could express. I heard a scuffling in the family room we had built, overlooking the old white oak. I found the noise was coming from the hearth. When I removed the firescreen, I found a young red-tailed hawk - a fledgling - that had somehow managed to fall down the chimney between my last two visits. My last action, on the land I acquired because of the hawk, was to carry the young hawk outside, next to my heart, and release her. She flew straight into the branches of the while oak where the first hawk had delivered her message.

The red-tailed hawk has become my most important bringer of omens. A hawk in good shape, flying my way or grabbing a good meal, will give me a surge of confidence for the day that has yet to be disappointed. A dead hawk in power lines will make me batten down the hatches and watch out for challenges.
I was once very late for a phone interview with a California journalist who was irritated and pressed for time. I wasn't sure the interview was going to go well. She asked me to give an example of how I navigate by synchronicity.
I was standing on the balcony of a villa overlooking Long Island Sound. Right below me, three bunnies had been scampering about in the grass. As I considered my response to the journalist's question, a red-tailed hawk made a vertical ascent, talons outstretched. It grabbed a bunny and shot straight up with its dinner in its clutches.
Given my affinity with the hawk, I took this as a good sign, indicating that despite our bumpy start the interview would turn out fine. I was about to recount what had just happened when some inner caution made me pause. I was talking to a journalist for a Californian holistic magazine; for all I knew, she was a vegan who might be horrified by the scene of the hawk taking the bunny rabbit, especially if I reported it with the relish I was feeling. So I told her a black dog story and she loved it and the interview came out just fine. The hawk sign was, once again, reliable.

For fuller versions of my encounters with the red-tailed hawk and Island Woman, please see my books Dreamways of the Iroquois and The Boy Who Died and Came Back.

Powerful images in your words describing your experiences, I am transported while reading and the journey feels healing on many levels, thank you for sharing!