The Dream Interpreter at the Sign of the Bull 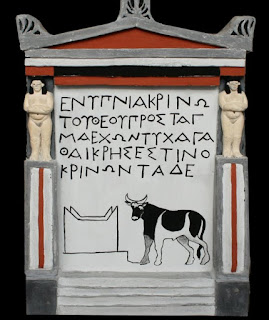 I judge dreams, having the mandate of the god.
To good fortune! The one judging these is a Cretan.

The text is on the shingle of an ancient dream interpreter at Saqqara in Egypt in the Ptolemaic age,  2nd century bce. Scholars debate the identity of the god he declared to be his patron, but a good guess would be Serapis, a composite deity who melded aspects of Hades, Osiris and the Apis bull. Serapis was a lord of death and of healing; the famous pool at Bethesda belonged to him before it became part of the Christian story. We know that the training of a kathodos, or candidate for initiation, in the ancient precincts of Serapis centered on incubating and working with dreams. We have records of a candidate in the time of Cleopatra being assigned to spend a whole year recalling and reporting dreams to his mentor.
The image above is a wonderful gypsum copy of the stele mounted in front of the dream interpreter's kiosk. In the painted scene a bull approaches a horned altar. The bull was sacred in both Egypt and Crete and was the favorite animal form of gods around the ancient Mediterranean and Middle East. A very dramatic form of dream incubation was practiced in a mausoleum of bulls at Saqqara where the supplicant slept amongst mummified bulls encased in giant sarcophagi.
The dream interpreter at the sign of the Bull plied his trade near the Anoubeion, the House of Anubis. Very appropriate, since the canine-headed Anubis was the patron of dreaming and soul travel as well as the guardian of the portals to the Otherworld. This was a busy commercial district, with constant traffic between two great temple complexes at either end of the street, the House of Anubis and the Serapeion, the Temple of Serapis. There were lost of vendors and small businesses. The dream interpreter sat in a booth behind his sign, waiting for trade. By identifying himself as "Cretan", he may have hoped to appeal to the Greeks and Macedonians who now ruled Egypt under the Ptolemies, in the wake of the conquest by Alexander the Great.


We don't know exactly what the dream reader at the sign of the Bull did for his clients, but his prime location suggests that he did not lack business. In his age, it was generally believed that dreams are a field of interaction between humans, gods and others, and that dreams often reveal the future. Everyone knew that dreams are important, so important that help may be required to determine the exact meaning, to decide on appropriate action to be taken, and to disperse or ward off bad energies that may be operating during the night.
According to Aristotle (a skeptic in regard to dream precognition and transpersonal communication) we need help with the meaning of dreams because the images are distorted: “dream-pictures, like pictures on water, are pulled out of shape by movement”.
An older and more popular view was that we need help in discerning the origin and nature of dreams because not all of them speak truth. Some may be deceiving messages dispatched by evil spirits or manipulative “dream senders” (oneiropompoi). The Greeks thought that Egyptian sorcerers were especially good at this.
It was said that we may need help in reading dreams because “the gods love to speak in riddles” in order to test us and goad us to expand our understanding.

The prime requirement for a dream interpreter, according to Artemidorus, the most famous practitioner of this trade before Freud, is “a gift for resemblances.”

Our dream interpreter at the sign of the Bull claimed something more, a special connection with a greater power. "The mandate of the god."

For a full discussion of ancient dream interpretation, please see chapter 2, "Interpreters and Diviners" in The Secret History of Dreaming.

I cannot think of a more important activity for these days than dreaming and paying attention to inner wisdom and guidance. If anything can get us out of this tight spot, dreaming can.

You know I am in full agreement.