On the dream train 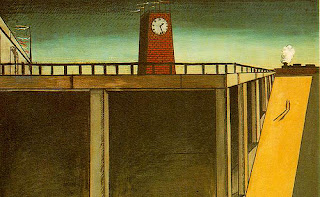 I've always liked trains. When I was a boy I would spend Saturdays riding out to the end of the train lines in Melbourne, Australia, and collecting the little timetable booklets they used to give out at each terminus. The floor of my room was wholly occupied by model Lionel trains, with little villages and battalions of toy soldiers, with which I would make Little Worlds. In later life, I've enjoyed riding trains across the English countryside, and the TGV from Montpellier to Barcelona and (when they are remotely on time) Amtrak trains from upstate New York along the Hudson River to Penn Station, a ride that can make you imagine you are sailing down the Rhine, when the state workers aren't squawking too loud on their cell phones.
But I take far more trains in my dreams than in regular life. Sometimes these journeys closely resemble ordinary trips, or anticipate future ones. Sometimes they take me into a different era - to a bittersweet kiss at the Gare du Nord in Paris, on the eve of the German Occupation, before I was born - or into an alternate reality like those suggested by de Chirico's steam engines, forever puffing away beyond a wall, or the trains that can plow the sea in Japanese anime movies.
As I listen to train dreams, and review my own, I'm struck by the wordplay that often puffing away with the dream engines.What line are we on? Are we on track or off track? Are we in need of new training? What's on the other side of the tracks? Are we tied to the tracks (or have we tied someone else to the tracks)? Are we in danger of missing the train?
At a point in my life when I was changing lines, I dreamed I came to a station where I was in danger of missing the train. I had to push open door after door in order to get to the platform. The doors were heavy and there seemed to be no end to them. I was becoming hot and frustrated when I became lucid and realized that there is more than one way of getting over a dream obstacle. My dream self levitated, rising above the barriers, then hovered like a bird above the railyard. From this perspective, I could see that there were many lines available, not just one or two options. And I could see into the distance, getting a glimpse of what lay ahead on each of the tracks.
When I remember this dream, it reminds me to try to get the big picture when approaching any decision, and that it's not enough to stay on track; we need to be sure that we are on the right track.
By contrast, in an another dream my dream self was being hustled along by an incompetent tourist guide to get on board a train that was about to leave a station. The guide gave me no forewarning of the departure time and I had to scramble to get my essential stuff - my journals, camera and art supplies - together for what was supposed to be a fun day of exploration. I found myself in an overcrowded compartment with no space to read and write. I carried this "little" dream with me as a caution not to let myself be hurried by other people's agendas into following a line that isn't right for me.
Though I like trains, in dreams like this they can represent collective approaches and group thinking that don't serve our creativity and our personal preferences. Yet staying on track with other people's values and approaches may be the right way to go. A woman shared a dream in which she was shown two trains that would each get her to her chosen destination at the same time. One of these trains ran on rails; the other did not. In the dream, she chose the train that stayed on track because this felt more comfortable and secure.
We don't want to miss the possibility that a train dream may be a preview of a quite literal trip, as in Grace's dream:

Train of the Future

I woke from a dream remembering only that I was sitting on a train, looking out the window and staring at a white building with an unusual shape..
Two weeks later, I was on the train to New York and as so often happens, it slowed down and came to a stop for no apparent reason.  I looked out the window and was shocked to see the exact same building from my dream; it was some kind of water treatment plant.  We sat for several minutes then the train carried on and I got to the city in time.
What was this about? This taught me that dreams can be CLEARLY precognitive.  Perhaps that was enough. There may have been a bit of symbolism in the train ride itself - that as I travel on the path of life, I am moving along with occasional stops but getting to my destinations.


There is urgency, or sadness, in some dreams of trains. We are worried we are going to miss a train, which seems to represent a life opportunity. We are parting from someone we love, as did another women dreamer who waved a tearful goodbye to her husband as his train pulled out of a station the week before he died from a heart attack. A mother who lost her son tragically young dreamed that she and her surviving boy accompanied him to the far side of the railroad tracks, and had to leave him there.
Then there are the trains that take us into another realm, like the Hogwarts train that leaves from platform 9 3/4 in the Harry Potter stories. Michele dreamed she was in the desert, looking at an immense lion sculpture that reminded her of the Egyptian Sphinx. As she watched, the great lion rose from the sand and became the engine of a train that carried a happy band of children off on magical adventures. This dream inspired her to create an illustrated children's book and to help children with their dreams.
As in Michele's dream, the engine of the dream train may represent what drives us and fires us up in our life journeys. I love the idea of riding a train that is pulled by a lion!

Art: Gare Montparnasse by Giorgio de Chirico
Posted by Robert Moss at 10:23 AM

Thank you for your posts- especially recent ones. A type of synchronicity that has encouraged me to re-connect with my emerging practice of dreamwork ("...practice, practice, practice..!") and indeed revisit some of the online work i've done with you in the past. many thanks!

This is a very timely post! I dreamed of a train last night for the first time that I can at least remember. I was on a yellow train, it was dark and the cars were empty but on of the cars had a homeless person sleeping in it. I don't remember seeing tracks or ground....maybe the train was floating? I could switch from car to car almost by just thinking about it I would appear in a different one yet they all were the same. I remember feeling alright about being on the train. Now that I think about it I have the feeling these cars were full and they represented old parts of my life I had been in and let the baggage out of.