Getting Out of the Way of the Big Wave: How dreamers have averted collective disasters 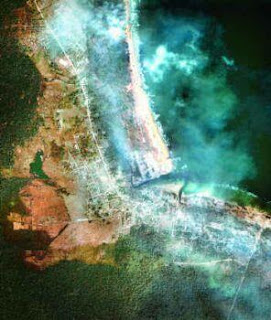 Any future we can see (in dreams or in other ways) is a possible future. The odds on any specific event being enacted are constantly shifting, and we want to take a probabilistic, rather than a deterministic, attitude towards our previews. We want to experiment actively with the possibility that we can help to manifest, or avert, an event foreshadowed by a dream by how we use or fail to use the dream information. To foster our understanding that none of this is exactly new practice, but rather part of a basic human survival kit, let me describe four cases from the history of dreaming, the kind of history that is not (yet) taught in schools but is essential to our understanding of the human odyssey. In each case, a dreamer’s ability to scout ahead was used to benefit a community in ways that saved many lives.

Living on the edge of survival, threatened by constant warfare, hungry winters and white men’s diseases and land-stealing, the Six Nations of the Longhouse Indians of the American Northeast – known to anthropologists as the Iroquois – made it the first business of the day to scan the dreams of the community for clues to the future. The term “dreamer” (atetshents) was a title of honor that also meant “doctor” and “healer”. While everyone dreams, some people dream stronger and truer than others, and those are the ones – when their insights have been tested and proven repeatedly – when you need to make a decision on which the safety and well-being of the people depends.
I spent several years studying the shamanic dreaming practices of the Iroquois after I started dreaming of an ancient Huron/Mohawk “woman of power” (arendiwanen) who insisted on communicating with me in her own language, which I was then obliged to study. My favorite documentary source on early Iroquois dreaming was the Jesuit Relations, a vast compilation of reports from the blackrobe missionaries who lived among these peoples in colonial times.
Father Bruyas, a Jesuit living with the in the 17th century, left a striking account of the practice of an Iroquois dream seer and how the community used her information. The dreamer reported that she had dreamed that an enemy tribe from the South would try to wipe out her village in a surprise attack. She described the place where her own warriors could ambush the enemy, and predicted that the enemy war chief would be captured and burned to death. Following her directions, the war captains set an ambush at the place she described, so confident of their victory that they fired up their kettles in advance for the celebration feast.

The English Minister Who Saved His Congregation

In 1558, under the reign of Catholic Queen Mary I, the Protestant minister John Rough was "sore troubled" when he dreamed that he saw two of the Guard leading the deacon of his congregation, Cutbert Simson, off to interrogation. Rough was especially troubled because, in the dream, the deacon was carrying a book listing all the members of the underground Protestant community; if this fell into the hands of the authorities in this age of religious persecution, all of them would be at risk. In the middle of the night, Rough told his dream to his wife and then tried to calm himself by reading. When he fell asleep, however, he "dreamed the like dream again."
Now profoundly agitated, Rough prepared to pay a visit to the deacon and to tell him the dream, certain that it was a warning. In the way of synchronicity, the deacon turned up at the minister's door first. When Rough told his dream, the deacon dismissed his fears, insisting that dreams are "but fantasies, and not to be credited." Rough had to call on his full ministerial authority, ordering the deacon in the name of Almighty God to place the book in safekeeping. The deacon, protesting, gave the book to Rough's wife. Soon after, Cutbert Simson was arrested and interrogated. The Reverend Rough's dream - and his insistence that its warning must be heeded - saved the whole congregation from exposure to the authorities.

The Teacher Who Saved Her Class

In 1988 , a school teacher in the Armenian mountain , dreamed she felt the earth trembling while class was in session.  In her dream, she instructed the children in the classroom to join hands and follow her. She led them to safety, without hesitation, through a maze of mountain trails and woke with clear recollection of the path she had followed.
The dream felt so “real” and so menacing that recounted it to fellow-teachers, who scoffed at her. She decided on her own course of action. Without mentioning the dream, she instructed the children in her class that if anything “bad” ever happened they were to join hands and follow her without question. Three days later, two earthquakes measuring 6.9 and 5.8 on the Richter scale destroyed the school. 112 children died immediately; others were burned to death in the aftermath. The only children who survived were the members of ’s class. When she felt the first tremors, she immediately acted on her dream guidance, leading her pupils to safety, joined hand to hand, along the complex mountain trail she had dreamed.

The Dreamers Who Got Out of the Way of the Tsunami

The Andamans, a hunter-gatherer people who live on islands of the same name in the , have a traditional practice of community dreaming. They grow a nightly web of dreams to produce life-supporting information for the community. In their communal big houses, they enter dreaming together with a shared story or intention. They may want to scout out where the best supply of fruit or game or fish, can be found to feed the people the next day. They spin a shared web of dreaming and travel out along its skeins, like human spiders
The terrible Asian tsunami of , brought home that the web of dreaming can be essential to survival. In late December, the Andamans are usually to be found in their seasonal fishing settlements along the coast. After the tsunami roared through that year, their shelters were gone. The Indian government, which claims possession of the islands, assumed that the Andamans along the coast had been drowned. Then the islanders reappeared on their forested hills. They knew the tsunami was coming, and got out of its way by quietly abandoning their fishing huts and taking to the hills. They knew because they observed the movements of animals, and listened to the voices of wind and water, and because they know how to dream as and for a community.

Very interesting and informative post. If we view the history, there are many people who compromised their lives to save the lives of others which depicts that humanity is still alive.

These huge waves made a lot of loss to the america and many other cities. But i appreciate the humanity of people who put thier lives in danger to save the others and thanks for sharing those inspirational stories.