The Man in the Moon

Do you believe in the man in the Moon?

No, not the face people imagine in the shadows of the craters, which is really the Great Rabbit, or Lunar Hare. Nor do I refer to those artful pictures, ever popular on greetings cards and in children’s stories, that add a nose and a grin and a wink to the crescent moon.

I am speaking of something altogether different. I am inquiring whether you know anything (for worthwhile beliefs can only stem from knowledge) of the beings who live in the Moon. I am well aware that since humans in clumsy space suits first walked on the Moon, it has been commonly believed that the Moon is an astral desert, empty of organic life. This is merely a modern superstition, founded in the confusion of different orders of reality. Beyond appearances, the Moon is thickly settled. Its inhabitants do not live on the Moon in the way you live on the Earth. They cannot be found on the lunar surface from which astronauts and robots pick rock samples. The lunar population lives in the Moon, which is to say, in the Sphere of Luna, a frequency domain located a little – just a little – beyond the realm you can touch and smell and taste with your ordinary senses.

I know what I am talking about, because the Moon is my home. If you happen to meet me tonight, because you happen to be looking up at the bright face of the Moon from under just the right tree at just the right time, or because you travel to my world on the wings of a dream, it’s quite likely you might see me as the man in the Moon, or at any rate a man in the Moon. I find it generally convenient, in my dealings with humans, to show myself as a human male, taller than average, with what I conceive to be a commanding – though not overbearing – presence, exquisitely tailored in a mode that is rarely encountered on Earth outside Jermyn Street and one or two most particular establishments in Buenos Aires. Yet I must disclose, at the beginning of my tale, that “man in the Moon” is a misnomer.

I live in the Moon, but I am not a man. I am a daimon. I have lived very close to men, so close that I have sometimes forgotten my true identity. But I belong to a different and more ancient order of beings. When you turn to books, you will find the word daimon has several spellings. I prefer the oldest version, an accurate transliteration from the Greeks, who were close observers of traffic to and from my realm. Their witches – especially in the wild northern reaches – were adept at the dangerous art of drawing down spirits from the Moon. The most excellent shaman-philosopher, Plutarch, studied deep in our academies before he took up permanent residence and joined the faculty of one of our finest schools. Plutarch’s essay on the Sphere of Luna, De facie quae in orbe lunae apparet remains the best travel guide to our realm outside the closed stacks of the Magic Library.

We know Plutarch well. It is a pity, for you, that his works are no longer taught in your schools, though he was read too often for what he wrote about tyrants and kings, instead of his essential work, which was all about us. He understood that the Moon and the Earth are as close as a man and his shadow. He knew that souls come and go constantly through our realm. He observed the descent of mind into the astral body in our dressing rooms, and the return of these energy suits to the suppliers when a traveler was given permission to return to the realm of mind. He watched all the souls that try to ascend to Luna after death and are rebuffed because they are dirty or confused. He saw souls that made it here, but reneged on their commitments, hurled from our ramparts through the black hole of Hecate. Do you know that great goddess’ scary sister, Melinoe. No? Well, be thankful if she does not visit you in the night with her train of spooks and nightmares. 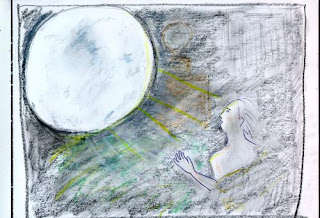 Do please be careful with the word “daimon” now it is in the air, darting around you on dragonfly wings. Words have the power to call things into manifestation, and bring creatures from one world into another. You don’t want to say “daimon” out loud the wrong way; this can produce unpleasant effects, and sometimes unwanted visitors. I prefer to hear it pronounced “die-mon”, so it almost sounds like “diamond”, an elegant homonym. “Day-mon” is an acceptable alternative version.  To call me a “demon”, on the other hand, would be extremely rude, as thoughtless as calling a man whose chosen name is Robert “Bob”, and likely to produce more adverse effects than a frown and a growl. I did not mind being called a “demon” in demotic Greek in the age of Cleopatra, but since then a fog of fear and confusion spread by the morbid imaginations of the Dark Ages has made that version quite unusable. 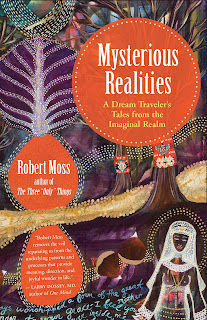 Excerpt from "Conversation with a Daimon of Luna" in Mysterious Realities by Robert Moss. Published by New World Library.

"Moon at the Foot of My Bed". Journal drawing by Robert Moss.