The gift of "boring" dreams 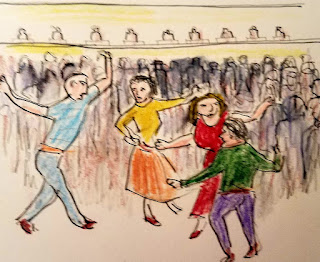 I often hear from dreamers who complain that their night dreams are boring or mundane. They feel they are missing the movies. “I’m forever dreaming of arguing with my mother,” writes one dreamer. “I’m fed up with having long-winded conversations with my boss,” writes another. “I get enough of him from nine to five. Why can’t I enjoy a dream romance in a tropical paradise, or go on an epic adventure?”

Of course we want the romance and adventure. But we also want to keep body and soul together on the roads of everyday life. Here’s another of my personal D.I.Y. mantras about dreamwork:

Ho-hum dreams are the most likely to offer help in navigating the future.

Why? Because much of waking life can be ho-hum too – until we start using the skills of dreaming and imagination to bring it more alive. So instead of complaining because you keep dreaming of arguments with your mother, you want to ask: how can I avoid getting into this situation again in the future? And perhaps also: how can I make peace with the part of myself that is like my mother?

Here’s one of my favorite examples of the need to examine a ho-hum dream as a preview of a possible future, and harvest information from the dream in order to navigate better in a developing situation and avoid an unwanted event in waking life.

A woman friend complained to me that she had a boring and irritating dream in which she was in her cubie at the office when her boss threw a temper tantrum. “He banged his fist down on  my desk, spilling my coffee over my work papers.” “What happened then?” “I called him a bad name and walked out.” She thought this over. “S–t. I think this may have cost me my job, in the dream.”

Suddenly the ho-hum dream sounded less boring than urgent. I asked the dreamer to run a reality check. Could her boss throw a two-year old temper tantrum? “He does that all the time.” Was there anything in the dream to indicate what he was mad about this time? “All I know is he wasn’t mad at me. He was just taking his rage out on me.”

If it were my dream, I now suggested, I would remember that next time my boss threw a hissy fit, his anger will probably not be directed at me, and I should keep my cool. The dreamer readily made this her action plan. “I’ll lay Miss Zen,” was her one-liner.

Not long after this conversation, the dream scene started to play out in exact detail. The boss came into the dreamer’s cubicle and banged his fist down on her work surface, spilling her coffee. Instead of swearing at him, she played Miss Zen.He exited later in some confusion. The boss returned later to apologize. “Sorry about how I behaved. It wasn’t about you.” Instead of saying, “I know,” the dreamer remained Miss Zen, sitting silent with a distant tight-lipped smile.

The boss came back with flowers. “I’m really sorry.” Miss Zen accepted the offering without comment, holding out a vase for the boss to fill.

At the end of the workday, the boss returned for the third time. “hey, I feel real bad. I want to invite you to come down to Cancun with the group I’m leading for the sales conference. You won’t have to do any work. You can just work on your tan and drink stuff that comes with little umbrellas.”

Because the dreamer did not discard a “boring” dream and worked with its information, she not only avoided an unpleasant scene and possible job loss but also collected an apology, flowers, and a free vacation.

I looked through my journals for a picture of a "boring"dream and this is about as close as I got. Here's a summary of my journal report:

Doing the Tarantella in lineI am in a vast space like the passport and customs control at an airport, in the fourth or fifth line from the front. The lines stretch across the whole space and as far back as I can see. Word comes that they are dancing the Tarantella somewhere behind us. There is a move to follow suit in the front rows.Feelings: curiousReality: I have been in airport lines almost as big as this,but I think this is the kind of airport where people take off for the Other Side.

Today's comment: Recorded pre-pandemic, this dream may have some resonance at a time when some people in reckless superspreader events sometimes seem to be doing a dance of Death. The tarantella originated in Italy, where wild dancing was regarded as a cure for the deadly bite oi a spider. I am not likely to be getting in a line at an airport any time soon.