"How does one learn to tell stories that please kings?" 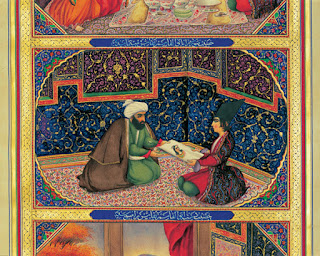 Dreams set us research assignments.My dream last night of the Rawi and the Evil Queen might find its place in a collection of nested stories like A Thousand and One Nights, the proper title of the book we often call the Arabian Nights. So I am about to immerse myself again that immense book of wonders. On the way to sticking my head under this tent of visions, I found a note I wrote on a luminous memoir by Moroccan writer Fatima Mernissi. It seems that the engine of her best creative work was a question that welled up when she was first told, as a young girl, about Scheherazade, who had to come up with a new story every night on pain of death:

“How does one learn to tell stories which please kings?”

In her account of a harem girlhood in , Fatima Mernissi gives us a stunning example of how storytelling can facilitate soul healing. Her text is  A Thousand and One Nights. As explains what these stories meant to her, and what they mean for Muslim women in general, we become aware that in the West, we have almost no inkling of what they mean.

Scheherazade, the young bride of a savage tyrant who has killed her many predecessors, must spin a captivating tale every night to make the king postpone his plan to have her beheaded at dawn. Her husband, King Schariar, is possessed by the spirit of revenge. He discovered his first wife in bed with another man – a slave – and killing her was not enough to dissipate his raging hatred and distrust of women. He ordered his vizier to fetch, one by one, every virgin girl in the kingdom. He spent one night with each, then killed her. Now there are only two virgins left: the vizier’s own daughter, Scheherazade, and her little sister. Though her father wants her to escape, Scheherazade is willing to do her duty. She has a plan that will change everything.

As Fatima Mernissi tells it: “She would cure the troubled King’s soul simply by talking to him about things that had happened to others. She would take him to faraway lands to observe foreign ways, so he could get closer to the strangeness within himself. She would help him to see his prison, his obsessive hatred of women. Scheherazade was sure that if she could bring the King to see himself, he would want to change and to love more.”

Scheherazade keeps the King spellbound through a thousand one nights, and at the end he is changed. He gives up his habit of murdering women.

Fatima first heard of Scheherazade from her mother, in the closed world of a harem in Fez. The word “harem” here does not mean a stable of concubines and slave girls, but a closed male-dominated world in which women of all ages are kept under lock and key, forced at every turning to think about the hudud, the boundary enforced by religion, law and custom. When little Fatima  learns about Scheherazade, her first and eager question to her mother is: “How does one learn to tell stories which please kings?”

This, of course, is the question we all need to answer, to heal our relationships – with ourselves as well as others – and our world.

Mernissi notes: “I was amazed to realize that for many Westerners, Scheherazade was considered a lovely but simple-minded entertainer, someone who relates innocuous tales and dresses fabulously. In our part of the world, Scheherazade is perceived as a courageous heroine and is one of our rare female mythological figures. Scheherazade is a strategist and a powerful thinker, who uses her psychological knowledge of human beings to get them to walk faster and leap higher. Like Saladin and Sindbad, she makes us bolder and more sure of ourselves and of our capacity to transform the world and its people.” 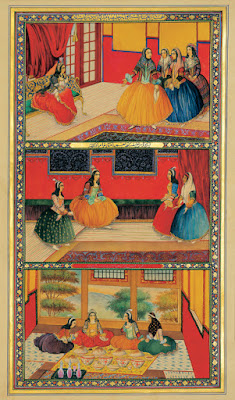 Pictures: Sani ol Molk. "Scheherazade and the Sultan"(top); illustration for a Persian edition of the Thousand and One Nights (bottom).