Advice from Italo Calvino: Conjure the book you want to read 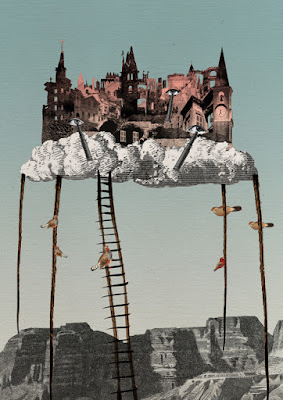 I am at my desk when a striking young Italian man, maybe in his late twenties, steps into the space. Dark-haired, nattily dressed in a beautiful suit with a contrasting vest. I know this is Italo Calvino. It does not occur to me that he is dead, because he is so vividly alive. Standing in front of me, on the other side of the desk, he tells me wants me to read something he has written about the afterlife.
Waking, I start looking for the Calvino story. I own half a dozen of his books. Any of his Invisible Cities could be afterlife, as well as imaginal, locales. Clearly I must read the last part of Mr Palomar, in which the protagonist is "Learning to Be Dead". I chance upon a quote from his Marcovaldo: Chi ha l’occhio, trova quel che cerca anche a occhi chiusi. "He who has a sharp eye finds what he is looking for even with his eyes closed." Then it occurs to me that Calvino's literary production may not have ended with his death.     I can't find Mr Palomar in my personal library. But I find the text of "Learning to Be Dead" at an academic website. I am not enthused. It is about a man who performs thought experiments, seeking to number and name everything he chooses to bring into his field of perception: waves on the shore, the life in a patch of lawn and at last the state of being dead. "For Mr. Palomar being dead means resigning himself to remaining the same in a definitive state, which he can no longer hope to change."
This leaves me cold. But on my computer screen, I find a message at the bottom of the last page of "Learning to be Dead":

This is a subliminal message. Go out and buy Mr. Palomar. Then learn how to be dead. Hurry.

I comply. My favorite used bookstore is five doors from my house, a dire situation since its stock is constantly migrating to my overcrowded shelves. I find a copy of Mr Palomar, I also find Six Memos for the Next Millennium, the published edition of a series of lectures that Calvino never gave; he died before he could deliver them, leaving one of the texts unfinished. This is pure gold. In "Lightness", the first of the lectures , I read:

Faced with the precarious existence of tribal life - drought, sickness, evil influences - the shaman responded by ridding his body of weight and flying to another world, another level of perception, where he could find the strength to change the face of reality.

Whenever humanity seems condemned to heaviness, I think I should fly like Perseus into a different space...The only hero able to cut off Medusa’s head is Perseus, who flies with winged sandals; Perseus, who does not turn his gaze upon the face of the Gorgon but only upon her image reflected in his bronze shield.

In the second of the lectures, titled "Quickness", he writes:

I dream of immense cosmologies, sagas and epics all reduced to the dimensions of an epigram.

We operate in this spirit in our Active Dreaming approach to dreamwork, by asking our voyagers to turn their dreams and visions (which can be personal epics) into a one-liner, a bumper sticker, a post-it note, a snapper, an aphorism.
Now I have a dozen Calvino books beside me in my reading corner. I am relishing his mastery of short forms. Some of his Invisible Cities appear and vanish in half a page, yet we are haunted by what we found there. I am studying Calvino's writing habits, since I suspect that his appearance in my night study may have been arranged by my dream producers to remind me to do more short forms - with short and shorter stories and essays, epics condensed in an epigram.
I throb with recognition when I find Calvino saying this about how he writes:

"I write fast but I have huge blank periods. It’s a bit like the story of the great Chinese artist—the emperor asked him to draw a crab, and the artist answered, I need ten years, a great house, and twenty servants. The ten years went by, and the emperor asked him for the drawing of the crab. I need another two years, he said. Then he asked for a further week. And finally he picked up his pen and drew the crab in a moment, with a single, rapid gesture." (Interview on The Art of Fiction for The Paris Review, no.130.)

Yes, I am known to work this way too.
Now I have found Calvino's statement about how he came to change genres radically, creating the "fabulist" short novels that freed him from the mold of socialist realism. In an introduction to Our Ancestors, a volume that gathers his "heraldic trilogy". Calvino reports:

"I began doing what came most naturally to me – that is, following the memory of the things I had loved best since boyhood. Instead of making myself write the book I ought to write, the novel that was expected of me, I conjured up the book I myself would have liked to read, the sort by an unknown writer, from another age and another country, discovered in an attic."

He was able to conjure the extraordinary short novel titled The Cloven Viscount (Il visconte dimezzato). He wrote it in 30 days over the summer and early fall of 1951 and it was published the following year. He was 29, about the age he appeared to be in my dream.
When Calvino or his eidolon popped up in my study in the favorite hour for both birth and death, he prompted me to remember some essential things about writing practice.
An epic can be condensed in an epigram.
Write when you're hot.
Don't force yourself to write what you ought to write. Conjure the book you want to read.
Grazie, Italo.


Art: (c) Eda Akaltun. From Eda's wonderful personal work based on Invisible Cities. Used with permission.
Posted by Robert Moss at 10:53 AM

Thank you for this inspiration, Robert! Capturing detail is one way to draw the reader in, but can bore the gods of passion, and readers who are accustomed to tweets. I’m going to write the novel that I want to read…