In the place between sleep and awake 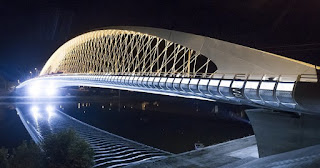 
How I love to lie, after sleep, in a state of horizontal meditation. Sometimes my thoughts and images stream from a dream I remember or that now slips through the curtain between the worlds. Often I am simply attending, in a relaxes way, to the forms and pictures that surface, fresh and unexpected, from a creative matrix that now becomes available.
On my first morning back in Prague, I was startled, but not altogether surprised, to observe a large number of people advancing towards me from bank of the Vltava River. They were well dressed in middle-class winter clothes, dark topcoats and hats, male and female, mostly adults. I indicated that they should choose one to speak.
The man who came forward had a German name I will not make public here.  He told me that had been try to cross Nový Most, but there was a problem. I walked with him to the bridge, try to understand. He demonstrated by stepping out onto the bridge. He got only so far - perhaps to the middle - when he was bounced back, as if he had run into an invisible rubber wall. I understood now that he and the others were dead but had not yet been able to make their crossing. They seemed like decent people, but I wondered about the history here. For example, what had this German been doing in World War II?
I stirred from this scene, not feeling an obligation to stay with this group.
Later, a scene opened like the cover of a children's book with a scene of a bright starry sky above rooftops, framed by a colored border that made the whole thing look like a stage. Big words floated in the sky: FRUTA DE DESCANSO. I knew this menat "Fruit of Rest" and thought it might be a delightful invitation. I entered into the spirit. I was drawn into enjoyable sideshows and spectacles. The whole thing had the quality of a mild and gentle version of Carnaval.
After a bathroom break and some time online, I lay down again and heard an inner voice. The in-between space between sleep and awake is a good place to entertain inner and transpersonal guides, but when the contact seems new, you want to check its reliability. This voice told me encouraging things about myself and my possible accomplishments as teacher and healer, but I felt the need to follow it into its home realm.
I willed myself to rise above the body and seek face-to-face contact. I did not lose contact with my physical body; some pains resulting from recent wear and tear helped to ensure that. I succeeded in finding a place that reminded me of a school of advanced studies on the other side. The entrance was quite different, though. It became something like the portal of huge, immensely elongated rocket ship. I was given to understand that beings here do not need to retain human form and that knowledge here can be stored in forms other than my beloved books.
I asked for a name for the guiding intelligence that was with me. He said I could think of him as the Rememberer, or the Memorialist, within my larger Self. To demonstrate what he remembers, he surprised me by putting me on a bus full of radiant beings. They all looked like children between ten and twelve years old. Around them, I saw luminous "shadows" - shapes in their energy fields - that provided hints of who and what they are, as adults, even very old ones, in other places and times.
Why did we all appear as children? It was indicated that this was because I had been brought to a place of despatch, from which all us - related personalities with related missions - were sent out across time

There was much, much more. I let many of the images and openings come and go without involvement or attachment. This part is no doubt familiar to meditators. More familiar to active dreamers is the choice to follow a certain encounter or portal that is offered into a lucid dream adventure - as with the group of the dead trying to cross the New Bridge, or the invitation to enjoy the Fruits of Rest in a latino funfair environment.
I drifted into sleep dream before ending the adventures. I thought I was at home, engaged in a fascinating online conference with vibrant African music in the background. The layout of my house was inverted. My study was at the top instead of the bottom. I did not notice this anomaly in the dream. I was interrupted by the early arrival of the mailman downstairs. I padded down to collect the mail. It was voluminous, filling twice the normal space. I gathered it up, but woke before I had the chance to go through it. Opening my dream mail is clearly an assignment for another period between sleep and awake.

Note: Sleep researchers call the state of consciousness I describe here the hypnopompic zone. I like the phrase used by Tinker Bell in the movie Peter Pan, when she tells Peter, "Look for me in the place between sleep and awake. There you will always find me."
Posted by Robert Moss at 3:48 AM

Such rich material presented for youand loved sharing in this through your descriptions. could sense the rubber wall they met and loved the picture of pre-teens about to go on a mission.
My cat interrupted my state this morning repeatedly so shall need to help him understand the need to respect this time too:)