Dreams, death and second burial among the Wayuu 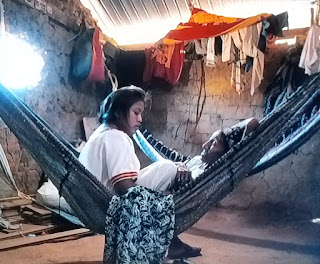 The screen is black for a long time.Then a spectral gray landscape emerges,followed by the leathery face and sticklike arm of an old woman sleeping in a hammock. Now we see the face of a pretty young native woman in a hammock nearby. As they lie in their hammocks, the young woman starts telling her dream. Her voice is full of strange squeaks and sawing noises. We follow the subtitles. She says that in her dream she became lost.Then she found herself among the dead. Her grandfather was there and said he would protect her. On her way back she saw her cousin but her cousin coud not see or hear her. This caused great pain. We begin to understand that the cousin is dead.
The grandmother asks whether the grandfather gave the dreamer a hammock. No? That means she is not going to die soon. Getting lost in a dream is very bad, however. It means that when you die no one will visit you.The young woman - we learn her name is Doris - says she was happy to see her grandfather, and her cousin. She also knows what the dream requires.She must travel across the dry peninsula to her cousin's gravesite, and dig up her body, and rebury the bones.
The two women discuss this in matter-of-fact tones. There are food tabos that must be respected, the grandmother says. Eat only dried meat the day of the disinternment. Absolutely no cheese, After the second burial, drink some firewater - not enought to get drunk, though - and rest in a hammock but stay awake all day and night until you get home, because this is a dangerous time when you must keep vigil.
We see Doris' head bobbing in the back of a truck as she makes the journey.We see a laborer chipping away at cement, under a stone cross, at the cousin's gravesite. We may have gleaned by now that the cousin killed herself and has been among the restless dead. The ritual about to be perfomed seems to be designed to stop her ghost from wandering. But nothing is explained to the viewer.
We see Doris seated over the open coffin, twisting her cousin's skull loose until she can pull it off the bones, gathering and cleaning all the remains, putting them in cloth bags. We hear voices raised shrill in grief as mourners stage a wake around the hammock where the bags of bones are laid, pending second burial
Finally, we follow Doris home and see a old, old shaman woman shaking a rattle and spitting tobacco juice and blowing firewater over her in a cleansing ritual. We hear Doris speaking to the unseen spirit of her cousin. She recalls how, when they were children, they loved to visit the cemetery and pretend they were going to bed there.
This is a summary of a remarkable 2019 Colombian documentary film called "Lapü", which means "dream" in Wayuunaiki, the language of the Wayuu people, and the only language recorded in the screen version. Often dark and disturbing, the film really requires some background in the traditional beliefs and practices of the Wayuu. They are an indigenous people of northern Colombia and Venezuela, cattle herders who live in a harsh lanscape of candelabra cactus subject to drought for nine months of the year and flood for the remaining three.

I discovered the film in the midst of rereading Michel Perrin, a French ethnographer who lived with the Wayuu and gave us valuable reports on their shamanic dreaming practices and their beliefs about the soul and its itinerary after death. He uses the older word for the Wayuu, Guajiro, in most of his books. His most accessible work, Les praticiens du rêve - a condennsation of a 1,000 page PhD thesis - is distinguished by its clear recognition that the true shaman is , first and last, a "dream practitioner". He explains with great clarity how and why dreaming is central to the practice of real shamans, and to how they model and navigate reality.
Perrin informs us that lapü is not only the Wayuu word for "dream" but the name of a "divinized personality", a "god " of dreaming whose functions extend to the reception of souls after death and to bringing a "little soul" to newborn babies. "Lapü gathers the souls of the dying and brings little bits of soul (petits bouts de l'âme) to little children. He gives dreams to the living, prescriptive dreams, premonitory dreams...from him emanate the auxiliary souls of shamans and, according to a great origin myth, he delivers the keys to dream to humans.” [1]
As in so many ancient and indigenous traditions, dreams are understood to be excursions of the soul. “The dream is often conceived as nocturnal wandering [by the soul], illness as a long walkabout, death as a definitive departure.” [2]
Another Wayuu word for dream, ei’pahaa, could be rendered as “an experience of the double”. Perrin calls it an “encounter with the double” after noting that the root of the word,  e’piha, means part of something or its complement. “Every being has its double and every event is anticipated in the form of reflections or shadows out of reach of ordinary conditions.” [3]
“Many say it: the dream is inspired by the Otherworld (monde-autre)...The truth of this world is found in the Otherworld, to which it is subject. Everything happens as if there is a temporal shift between the two worlds. The Otherworld anticipates this world, of which it is the double – 'the soul', I was told one day.” [4]

Perrin's informants explain second burial to him like this:

Second burial may lay to rest the yoluha, the spectral form in which the dead continue after death. It has its own land, Hepira., where the dead indulge their appetites – especially for sex – voraciously.

The Way of the Dead Indians Perrin brings together the insights of five Wayuu elders on the nature of soul, dreaming and death

To each of us is attached a soul.
it is like a bit of white cotton fluff,
like smoke.
But no one can see it.

Everything that happens in our dreams
is what happens to our soul.
If a Guajiro starts dreaming that he is elsewhere,
near a well or in a house,
or if he sees birds,
this means that his soul has left his heart…
by way of his mouth
to fly over yonder.
But his heart continues to work…

When a Guajro is sick,
it’s as though his soul were a prisoner in Dream’s abode.
It’s there that the spirit of a shaman
can find it and bring it back to the sick man…

It is the souls of the dead who come back to earth
by way of our dreams.
They are the ones that are met by our souls
when we dream of the dead. [6]

A cautionary theme running through the narratives collected by Perrin echoes what I have heard in other idnigenous traditions: when you lose your dreams, it is because you have lost a vital part of your soul. This can bring illness, even death.
The Wayuu say that “when you no longer dream, malapuinwaa, that is a sign or consequence of grave illness. You are almost dead because when your dreams vanish so do all traces of the soul.”
An elderly, sad Wayuu man, said this:

I just sleep because of my illness
I have been without dreams for a long time
I can’t dream any more, I don’t know how to dream,
because now I am close to death. [7]