Australian Aborigines say that the Big stories are hunting the right people to tell them. The way that Kyrgyz singers are called in vivid and sensory dreams to memorize and recite an epic of more than Homeric length is a fascinating and rather extreme example of how this can work.
Kyrgyzstan iis a poor, landlocked, Turkic-speaking country that was once part of the Soviet Union. Islam is the dominant religion today, but the contending influences of Soviet secularism and the old shamanic ways of a people of horsemen and sheep herders still run strong.
An epic known as the Manas is still central to the national identity of the Kyrgyz people. It runs to 500,000 lines. It recounts the story of a hero khan who fought off his people’s enemies and unified tribes to make a nation, and of his son and grandson. The epic is studded with dreams, which are often “omens” containing prophecies.
The Manas is transmitted through oral narration, by a special type of master singer, known as the manaschi, who recites the verses and is sustained and reinforced by the lively responses of his audience. He is not simply performing an extraordinary feat of memory, though years of memorization are involved; each performance of the Manas will introduce fresh words, because this is a living entity, not something frozen in a canonical text.
Taking on the obligations of a manaschi, a singer or teller of this longer-than-Homeric epic, is clearly only for a few. Typically, the singers-to-be are called to their vocation by dreams in which a great manaschi of the past, or a character from the epic, appears to them. Some of those who receive dream visitations of this kind are reluctant to take on the arduous apprenticeship and demanding duties of the role; they may receive successive visitations, developing into an offer they can’t refuse. For example, they may be told they will fall ill or lose the use of their limbs or their voice if they do not carry the immense and ancient song.
A famous manaschi, Sayakbay Karalaev (1894-1971) received his calling in a big dream involving an encounter with the hero of the epic, Manas, and his wife and companions.  In his early twenties, traveling on the road to Orto-Tokay, he was stunned to see an old black boulder transformed into a great white yurt. He heard a loud noise coming from the sky and fainted with terror.
When he woke – inside his dream vision – he entered the yurt, and was offered food by the wife of Manas. When he left the yurt he was greeted by a man who told him, “We are happy to meet you.” The man introduced himself as another of the heroes of the epic: “”I am Bakai,who finds the way in the dark and words of wisdom when necessary.” He offered the singer-to-be the special food of Manas. As he swallowed the food, Sayakbay took into himself the gift of singing and of memory required to take up his new work., 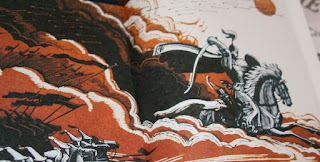 Danish anthropologist Maria Elisabeth Louw interviewed contemporary Kyrgyz about their dreams and reports a continuing widespread belief that the ancestors appear to us in dreams and that dreams can provide foreknowledge of the future. She reports that dreams are widely regarded – even in relatively secular Bishkek, the capital of Kyrgyzstan – as the main way God keeps in touch with people. “Certain dreams are seen as ayan, omens or direct signs sent by the ancestors, and ultimately by God, which can help people to make the right decisions and choices in life – if they know how to interpret the omens.” [1]
One of the markers of the dream that is ayan, an omen, is that sensory impressions are unusually strong, including the sense of smell or taste, and that these impressions linger after waking.
Dream visitations by an arbak –  the ghost” or “spirit” of  a deceased relative or ancestor – are commonplace, and may influence family decisions.  Thursdays and Fridays are regarded as favorite visiting days for the ancestors, who like to check on how the family is doing; in Muslim households, verses of the Koran are often recited on these evenings.

Sayakbay's dream of meeting a family of spirits inside a stone echoes through other cultures. In an Icelandic story from the 13th century, a powerful spámaðr (prophet, wizard) has a stronghold inside a stone. [2]