Those who die and come back 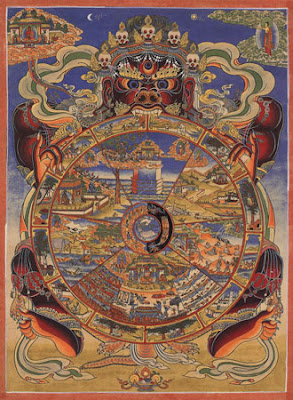 Who knows what happens after death?

The Tibetan language has a word for those who have died and come back. The word is delog (pronounced "day-loak" with the stress on the first syllable). There is also the term nyin log, for one who dies and returns in one day.

Delog Dawa Drolma [d. 1941] recorded a detailed account of her travels in “realms of pure appearance” under the guidance of White Tara while her teenage body lay seemingly lifeless for five days. These higher realms, like the lower ones, are understood to be “the display of mind”. The pure realms are the display of enlightened awareness, while the bardo state and the six directions of rebirth are “the display of delusion and the projection of mind’s poisons.” [x]

In the presence of the Death lord Yama Dharmaraja, she sings (with Tara) a song:

If there is recognition, there is just this – one’s own mind.

If there is no recognition, there is the great wrathful lord of death [xi]

The Tibetan Library of Works and Archives in Dharamsala, India,  houses at least a dozen accounts of delogs.

French anthropologist Francoise Pommaret did pioneer work in this field,  published as  Les revenants de l’au-dela dans le monde Tibetain. She traveled often to the Himalayan highlands and  discovered historical records of ten delogs from the 11th to the 20th century. She interviewed a delog in a village in Nepal and three in Bhutan Pommaret’s studies of  texts include a marvelously detailed story of a delog whose biography is based on a 17th-century manuscript.

Pommaret observes that "at ﬁrst, the delogs may not realize that they are dead, when the spirit separates from the body, leaving it seeming like an animal in the delog’s clothing. As the disembodied spirit roams about the home, the delog may not understand why the rest of the family is acting so strangely and unresponsive to the delog’s efforts at communication."

A delog named Gling Bza’ chos skyid reported that she did not recognize her own body when she saw the family gathered round it in mourning:

"When I saw my own bed, there was the cadaver of a big pig covered with my clothing. My husband and my children and all the neighbors of the village arrived and began to cry. They began to prepare for a religious ceremony and I thought, “What are you doing?” But they did not see me and I felt abandoned. I did not think that I was dead."

When another delog met her spiritual guardian (yi dam), he said:

“Don’t you know that you are dead? Don’t show attachment to your body of illusion; lift your spirit towards the essence of things. Come where I will lead you”

Then she met terrifying minions of Yama shouting, “Execute!” but was protected by her yi dam and her mantra.

I would have found the term delog useful as a boy.When I was three, I was pronounced clinically dead from pneumonia in a Hobart hospital. When I revived, the doctors told my parents, with some embarrassment, "Your boy died and came back". I was again pronounced dead under the surgeon's knife during emergency appendectomy when I was nine. While out of my body, I seemed to live a whole lifetime in another world. I titled the memoir in which I describe these experiences The Boy Who Died and Came Back. 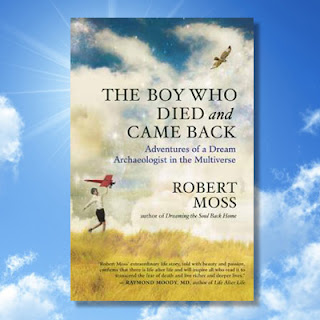 Art: Bhavachakra depicting the realms of existence within the grip of Death